WASHINGTON, April 17, 2015 - In the Emerging Europe and Central Asia (ECA) region, lower oil prices and the economic slowdown in Russia are weighing heavily on many economies in Eurasia, while countries in the Eurozone are benefiting from lower oil prices and a modest economic recovery. Overall, economic growth in ECA will be almost non-existent in 2015, down from 1.8 percent last year, the World Bank said during the 2015 World Bank/IMF Spring Meetings.

This drop in growth largely comes from a major slowdown in Russia, which is caused by lower oil prices and a sharp economic downturn. Not counting Russia, the rest of the region is expected to grow by 2.8 percent in 2015.

“Emerging Europe and Central Asia is expected to be the slowest growing region worldwide, with almost no growth forecast for 2015,” said Laura Tuck, Vice-President for the World Bank’s Emerging Europe and Central Asia region. “These low growth prospects are driven in large part by those countries in the eastern part of the region that are highly dependent on oil exports, or on trade and remittances from oil exporting countries, which are experiencing a slowdown. This is compounded by ongoing geopolitical tensions due to the conflict in Ukraine. Poor households are hit either directly because they receive fewer remittances, or indirectly because of the macroeconomic consequences, including higher import prices, the disappearance of jobs in construction and other non-tradable sectors, and potentially lower government transfers because of induced fiscal pressures. As a result, poverty rates are expected to rise.”

Tuck added that, “On the other hand, Central and South Eastern Europe and the Western Balkans – those countries that have close ties to the Eurozone – are benefitting from an increased pickup in net exports. The Eurozone is experiencing a nascent but modest recovery, with an expansionary monetary policy and declining oil prices, which is boosting consumer and business confidence. 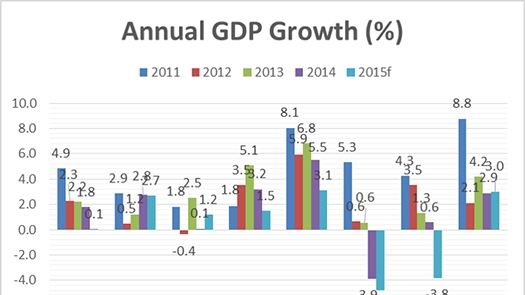 Looking ahead, the baseline scenario calls for a sharp recession in Russia, with a projected contraction of 3.8 percent in 2015 and 0.3 percent in 2016. This forecast is based on expectations of an ongoing slump in oil prices (oil prices remaining in the US$50-60 range) and no immediate resolution of geopolitical tensions.

The flexibility introduced into the exchange rate regime (the ruble has depreciated nearly 40 percent over the last year) has allowed the country to avoid a balance of payments crisis and has facilitated rebalancing of demand and production away from imports and toward domestic products and exports.

Countries in the South Caucasus, Eastern Europe, and Central Asia have been hard hit by the downturn in Russia and the oil price shock, directly and indirectly due to lower oil revenues, or a decline in remittances, and trade. Growth rates in 2015 are expected to be half those seen in 2014 in the South Caucasus and Central Asia, while Eastern Europe, which includes Ukraine, is expected to fall further into recession.

Benefiting from the Eurozone link

EU-Central and South Eastern Europe (EU-CSEE) countries are expected to see growth remain roughly the same in 2015 as in 2014 – about 2.7 percent – which is a significant improvement from the previous two years when growth was very modest (0.5 percent in 2012 and 1.2 percent in 2013), but it still remains far below potential. Unemployment rates remain stubbornly above 10 percent in many EU-CSEE countries and consumption growth is sluggish.

Economic growth in the Western Balkans is expected to be a modest 1.2 percent in 2015, up from 0.7 percent in 2014 as a pick-up in net exports is expected to offset slowing investment and consumption. The Western Balkans still remain heavily burdened by the lack of new credit, and non-performing loans are the highest in the ECA region (above 16 percent).

Overall, these countries close to the Eurozone are seeing a pick-up in consumer and business confidence with reduced fears of deflation with quantitative monetary policy easing, a fall in oil prices, initial signs of a pick-up in industrial production, and, at least to date, limited spillover from the financial turbulence in Greece and uncertainty over Ukraine.

Given the weaker buying power of many households in the region, poverty rates are expected to rise in several countries. This is a reversal of the downward trend toward lower poverty rates across the region. Poor households in oil-exporting countries and remittances-receiving countries are hit by higher import prices due to devaluations, the disappearance of jobs in construction and other non-tradable sectors, and because of fiscal pressures. This highlights the need for a quick adjustment to the new economic reality. Only if countries seize new opportunities in tradable sectors, can the deterioration of poverty rates be stopped.

Exchange rate adjustments, along with prudent monetary policy to keep domestic inflation under control, will help countries regain competitiveness in global markets in the Eastern part of the region. For the EU-CSEE part of the region, projected low oil prices and monetary policy easing in the Eurozone should continue to help to mitigate the impact of low capital inflows and remaining uncertainty, including that arising from high debt levels, vulnerabilities in the banking sectors, geopolitical tensions, and Greece’s current financial turbulence.

“The bottom line is that countries are performing the rebalancing act to the ‘new normal’ in which they have to seize new opportunities to expand export sectors,” said Hans Timmer, Chief Economist in the World Bank’s Europe and Central Asia region. “This is very much true for oil-exporting countries, but also for countries in the western part of the region that have experienced depreciations and low capital inflows. Ongoing reforms to improve the business climate are key to permit expansion in these sectors. Moreover, steady financial sector and macro management is critical, particularly in dollarized economies. Postponement of the adjustments needed for the rebalancing can be very costly and may backfire.”