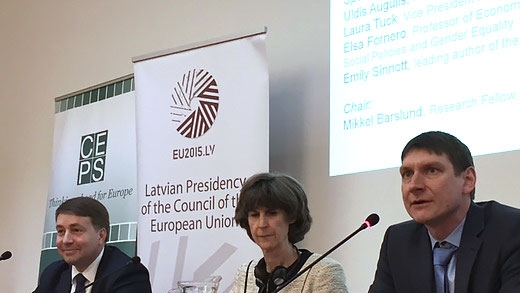 Europe’s population is growing older, and people are living longer and healthier lives. However, according to the report, within the European Union (EU), the Central Europe and the Baltic countries have seen fertility fall to lower levels than those in the EU-15, and significant outward migration of younger populations, both of which are considerably accelerating the aging process and resulting in shrinking populations. Life expectancy in these countries remains significantly below that of the EU-15.

Launched today at the Center for European Policy Studies (CEPS), Uldis Augulis, Minister for Welfare of the Republic of Latvia, Laura Tuck, World Bank Vice President for Europe and Central Asia, and Elsa Fornero, Professor of Economics, Università di Torino and former Italian Minister of Labor, Social Policies, and Gender Equality discussed the economic and social consequences of aging for Central Europe and the Baltic countries, and policy recommendations to address the aging challenge.

“The countries in Central Europe and the Baltics are aging faster than those in the rest of the EU, and for different reasons,” said Laura Tuck, World Bank Vice President for Europe and Central Asia. “Given that the decline in fertility and the high level of outmigration are the strongest contributors to this demographic phenomenon, countries could benefit from addressing the economic and social factors causing the drop in younger cohort size.  This could entail greater investment in human capital – in the health and education of individuals – so as to promote active aging. These are what we call ‘smart solutions’ as they work on both the personal and the macroeconomic levels.”

According to the report, wealthier European Union countries have enjoyed near-universal access to health care and have benefited from public health promotion campaigns, both of which have contributed to the reduction in morbidity and mortality due to heart disease. As a result, EU-15 countries enjoy an average life expectancy of 81 years. Many challenges still remain for these countries, but the process of adjustment to the new demographic realities is well under way. The countries of Central Europe and the Baltics, on the other hand, are aging differently and face quite different challenges.

“In most of the Central Europe and the Baltics countries, fertility has fallen to lower levels than in the EU-15, in case of some it is as low as 1.3 or 1.4 children per woman,” explains Emily Sinnott, World Bank Senior Economics and lead author of the report. “Average life expectancy is below EU-15 – for most countries, the gap is between four and seven years. Much of the lower longevity is explained by the higher mortality amongst the poor. In addition, the significant outward migration of younger populations is considerably accelerating the aging process and has resulted in a fall in populations in some countries.”

As a result of shrinking younger populations, countries in Central Europe and the Baltics will face several economic and social challenges, such as:

Countries in Central Europe and the Baltics have made significant progress in many of the areas identified above.  But more can be done. This Report is part of the ongoing analytical work program at the World Bank on the topic of population aging. Within the EU, the World Bank is partnering with governments on aging-related policy research projects in Bulgaria, Hungary, Poland, Romania, and Latvia. Outside the EU, the World Bank is engaged actively in work on this issue in Europe and Central Asia, Latin America, and East Asia.

For an online copy of the report, please visit: