The Russian Economy in 2018: The Cart’s Still Here Today

Thank you, Forbes readers. I am pleasantly surprised by the great feedback you gave on my inaugural column -- please keep it coming. Almost all of you commented on how much you appreciated the non-technical, jargon-free explanation of economics issues as they apply to Russia.

Many of you also asked if I could explain how Russia’s economy would fare in 2018, specifically what would be the impact of the March presidential elections and the June/July FIFA World Cup.

Let’s begin with the presidential elections. In many countries, elections are preceded by a boom in mostly wasteful public spending and a rise in inflation. This has not been the case for Russia (the fiscal deficit remains below 2 percent of GDP. And annual inflation, around 4 percent, is at an all-time low). The macro-fiscal implications of the elections are therefore almost nil.

The pertinent question is what happens after the March elections? If a new reform program eases the structural constraints of competition, innovation, and skills, that will be a big plus. Even so, do not expect the gains to materialize in 2018. Such reforms will have important, long-term payoffs, but not immediate ones.

Second, the FIFA World Cup. The gains to the Russian economy through increased investment in new and upgraded FIFA related infrastructure were largely exhausted in 2017. Sure, the economy will gain in 2018 through increased consumption and services during the summer.

Unfortunately, if history is a guide, these gains - just like the fading crowds - will also fade away. The Journal of Economic Perspectives published an article in 2016 titled “Going for the Gold: The Economics of the Olympics”, by Baade and Matheson. Their sobering conclusion is that, “in most cases the Olympics are a money-losing proposition for host cities; they result in positive net benefits only under very specific and unusual circumstances”. Let’s not expect too much from the FIFA World Cup in a strict, economic sense.

But there is a third event, if you can call it that, which has escaped public attention somewhat. And that is the gradual return of Russian money to Russian shores. In 2017, adjusting for the one-off Rosneft privatization deal, FDI inflows into Russia increased by about 25 percent compared to last year and totaled about US$25 billion.

The reasons for this are varied: a growing economy and improving business environment, for example. However, in the first half of 2017, most FDI came from offshore zones usually associated with capital flight, in a phenomenon dubbed as “round-tripping”, i.e., Russian money masquerading as foreign money which re-enters Russia in the form of FDI.

This is not a small issue for Russia (my colleagues and I published a paper about what to do when FDI is neither foreign nor direct). In any case, money is returning to Russian shores. The question is whether this money can be put to good use. The answer is, yes, but only if there are enough good projects. This does not seem to be the case though – one metric is that Russia’s share of investment in GDP is just 21 percent (compared to 43 percent in China).

2018 could therefore see a growing mismatch between the supply vs. demand of funds. Addressing this mismatch will require stronger efforts to improve Russia’s investment climate. Russia registered impressive progress reaching 35th position among the 190 economies measured in this year’s World Bank Doing Business report. We all need to recognize and applaud that.

However, Doing Business assesses only one part of the overall quality of the investment climate. Competition policy and inspections, for example, are some of the other pertinent investment climate issues where ongoing reform can help, and hence better match the supply of funds with their use.

So, where does this leave us in 2018? For the most part, we can expect more of the same. Indeed, the World Bank forecasts a growth rate of 1.7 percent in 2018 – almost the same as in 2017. While it may vary up and down a bit, and there are both upside and downside risks here (as we discuss in our latest Russia Economic Report), essentially 2018 looks to be the same as 2017.

But a larger point to remember is not whether the 2018 growth rate turns out to be 1.5 percent or 2 percent, Rather, it is whether Russia can catch up with the average global growth rate (of about 3 percent).

You may ask: how important is catching up to the global average? If the Russian economy grows at 1.7 percent, it would take approximately 42 years for national income to double. But if it grows at the global average of 3 percent, thanks to the magic of compounding, income would double in just 24 years, i.e., 18 years faster.

Catching up with the world would make a big difference. Admittedly, making up for this more than 1 percent+ point differential is not easy in the absence of easing the major structural constraints I mentioned earlier. Unless Russia can spring a few surprises, much like in Ivan Andreevich Krylov’s (1769 – 1844) poem of the crawfish, swan and pike, we can expect the Russian economy in 2018 to be, well, more of the same -- the cart’s still here today. 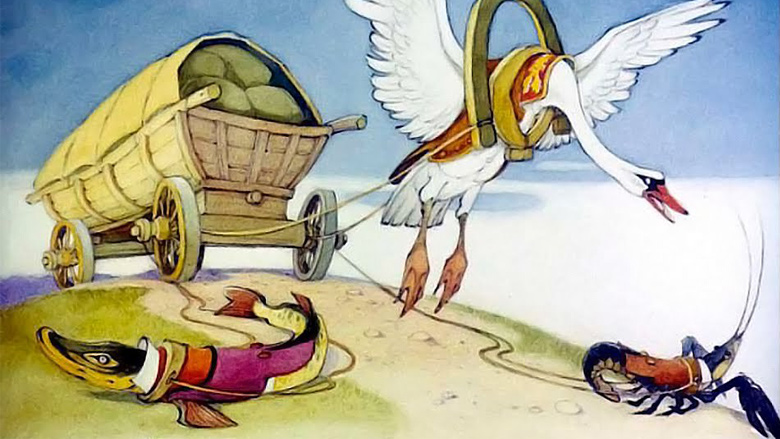