We all like to win prizes – it is part of human nature.  And in recognition of that fact, Serbia recently started offering prizes for improved performance in the interests of justice.

With support from the World Bank, this month the Supreme Court of Cassation of Serbia launched its inaugural Court Rewards Program.  The Rewards Program has been carefully designed to incentivize first instance courts to improve efficiency and productivity in case processing.

At the annual justice conference in Vrnjačka Banja on October 11, the Supreme Court issued two categories of awards to six courts. They were awarded for the largest improvement in backlog reduction and the largest improvement in the number of resolved cases per judge. The selection of the winners was based on objective data from case management systems. The awards went to Basic Courts in Niš, Lebane, Leskovac, Novi Sad, and to First, Second and Third Basic Court in Belgrade.

It is not a lot of money: 5,000 Euros for first pace, 3,000 Euros for second, and 2,000 for the third. But it’s enough to be enticing and to send a motivational signal to all the courts. And rules have been put in place to ensure that prizes are used for the benefit of the court as a whole. Winning courts can choose to spend their prize money on ICT hardware, office equipment, court signage, or materials for the beautification of the court (including paint, plants, or materials for repairs).

What will it change? There is a wealth of research on the role of incentives in the public sector – and in particular on how public institutions can improve performance by rewarding their staff. The research shows that non-financial rewards can be more powerful than cash and they provide extra motivation to do socially desirable acts. If you single out and reward “most improved players” you simultaneously others to do better.

In addition, group rewards encourage team player behavior, especially among smaller teams. Rewards provide extra motivation when combined with recognition from senior figures and visibility from peers. Around the world, doctors, teachers, and tax collectors are all responding to incentives offered through carefully-designed rewards programs. But courts have generally been late to the game.

Around the world, courts have relied predominantly on compliance to motivate court performance. ("Submit this report!", "Meet this standard!"). Occasionally, they have drawn on altruism to motivate their ranks. ("Courts exist to serve citizens!", "Let us uphold the rule of law!").

But judiciaries have tended to shy away from rewards programs, on the basis that judges and court staff should not be offered inducement to do what is legally required. More modern judiciaries have developed performance frameworks, with targets and monitoring tools. They, too, have tended to be compliance-based ("Submit more reports!", "Meet more targets!").

And few have complemented such frameworks with rewards for courts that meet or exceed the desired level of performance. In this regard, Serbia is at the forefront of innovation among judiciaries in Europe in incentivizing court performance.

The Supreme Court is looking to expand its Rewards Program in the coming years.  We look forward to more success and prizes to come.

What is important, though, is that the courts are not the only winners. The ultimate winner is… Serbia and Serbian citizens and businesses who expect fast and fair service in their courts. 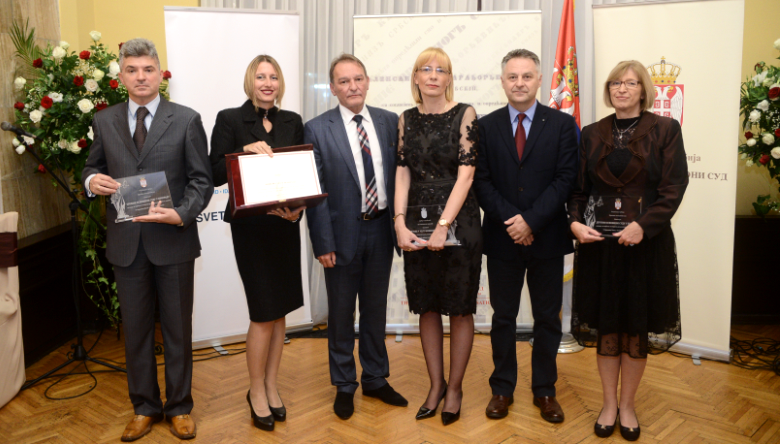