Asset Declarations: A Threat to Privacy or a Powerful Anti-Corruption Tool?

Asset declarations of public officials are a powerful tool to prevent corruption, detect illicit enrichment and conflicts of interests. According to the World Bank, more than 150 countries have introduced asset disclosure requirements for their public officials.

Public disclosure of the private assets of public officials and family members does not clash with the rights to privacy and data protection. Both rights are not absolute and can be restricted provided there is a basis in law and a legitimate public interest justifies the restriction. Prevention of corruption and exposing unexplained wealth of officials are serious and legitimate public interests.

In Ukraine, corruption is a threat to national security and undermines the well-being of citizens. Limitations on the privacy of public officials by requiring them to disclose their income, assets and liabilities serves the public interest. Academic studies have shown that public access to declared information is associated with lower levels of perceived corruption. Country experiences also indicate that public access can greatly increase the ability of disclosure systems to deliver results.

In Wypych v. Poland (October 25, 2005, application no. 2428/05), the European Court of Human Rights rejected the complaint of a local council member in Poland who refused to submit his asset declaration claiming that the obligation to disclose details concerning his financial situation and property portfolio imposed by legislation was in breach of Article 8 of the European Convention of Human Rights.

The Court found that the requirement to submit the declaration and its online publication were indeed an interference with the right to privacy, but that it was justified and the comprehensive scope of the information to be submitted was not found to be excessively burdensome:

The Court “considers that it is precisely this comprehensive character which makes it realistic to assume that the impugned provisions will meet their objective of giving the public a reasonably exhaustive picture of councilors’ financial positions ... that the additional obligation to submit information on property, including marital property, can be said to be reasonable in that it is designed to discourage attempts to conceal assets simply by acquiring them using the name of a councilor’s spouse.”

The European Court of Human Rights also endorsed the publication and internet access to declarations arguing that “the general public has a legitimate interest in ascertaining that local politics are transparent and Internet access to the declarations makes access to such information effective and easy. Without such access, the obligation would have no practical importance or genuine incidence on the degree to which the public is informed about the political process.”

It is a welcome step, therefore, that in 2014 the Parliament of Ukraine adopted a new Corruption Prevention Law that required the comprehensive disclosure of asset and income information of public officials and their family members. The new Law entered into force in April 2015 but – with regard to asset declarations – has been enforced only starting from September 1, 2016, when the new electronic system of online submission and publication of asset declarations was launched.

The Law is based on the previous anti-corruption legislation that also provided for declaration and publication of a broad scope of personal data, introducing new types of data to be disclosed, including information on cash savings, valuable movable assets and beneficial owners of property.

The 2014 Law provided the foundation for building a highly effective asset declaration system. It sets a clear legal basis for collection and publication of personal data in asset declarations. The Law explicitly states what information is public. The Law also states what data should be kept confidential and the Personal Data Protection Law duplicates these provisions.

The chart below (from recent research by the World Bank) shows that Ukraine is not unique in this regard and that 70 percent of countries in Europe and Central Asia, as well as 97 percent of OECD high-income countries require mandatory public disclosure of information in asset declarations. 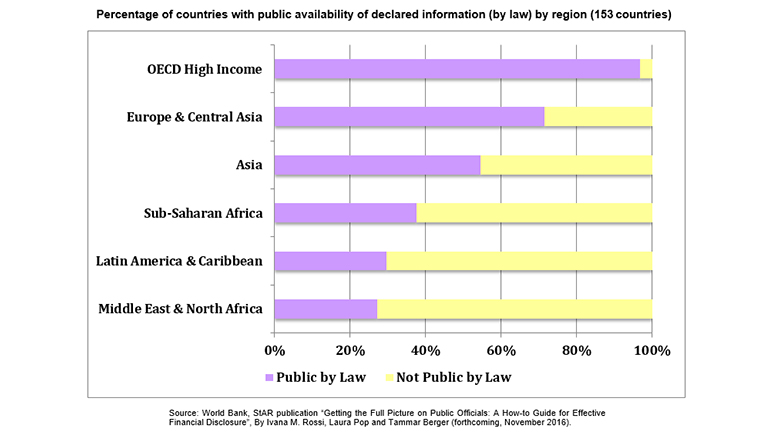 Some have questioned the scope of information that is required in asset declarations. The comprehensiveness of the disclosure requirements in Ukraine matches the objectives of the disclosure system, which is to identify both unjustified variations of wealth and conflict of interests. Recent World Bank research shows that many other countries require the same categories of information as in Ukraine. See the table below for the categories of information disclosed in asset declarations. 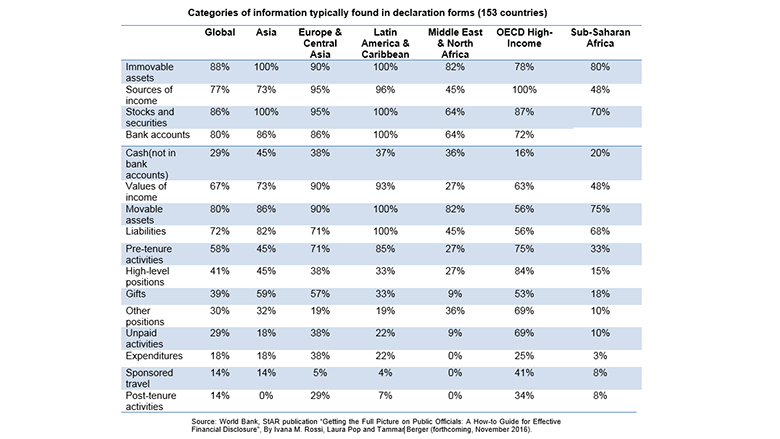 It is also common that information about assets of family members is included in declarations of public officials and disclosed to the public. Family members typically include spouses and minor children. 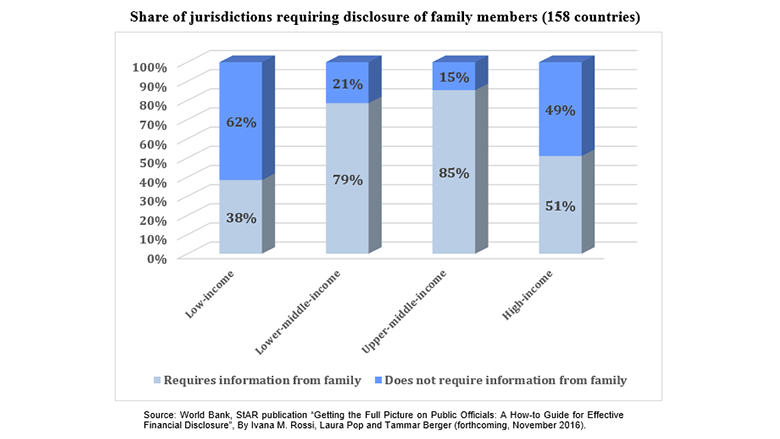 Some countries also use thresholds for declaring certain assets. The table below compares the provisions in the Ukrainian law with those of other countries in the region. 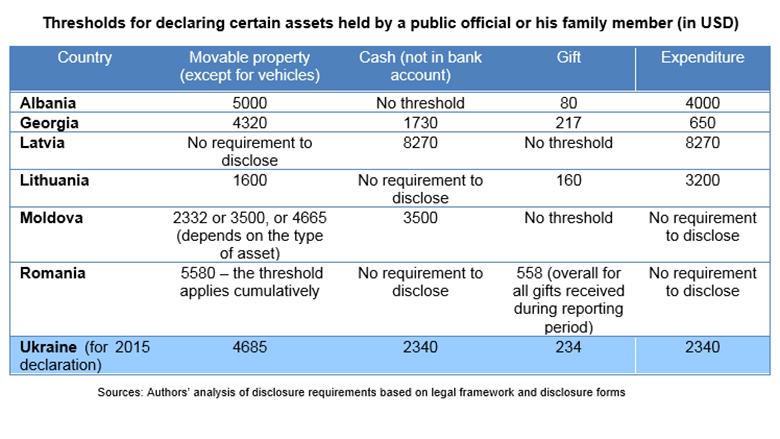 The Ukrainian law on asset disclosure is comparable with other countries in the region both in terms of the scope of the information declared and its approach towards public access. While public access can raise valid concerns, the benefits outweigh the costs and any interference with privacy rights in the declaration is proportionate to the public interest. Online disclosure of public declarations has been introduced in many countries and is essential if public servants are to be held to account.

Originally published on Ukrainska Pravda in Ukrainian on September 26, 2016.