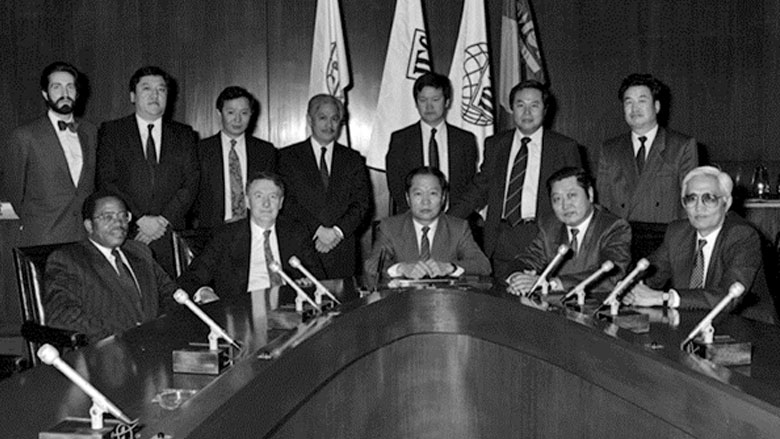 The Mongolian delegation led by former Minister of Finance A. Bazarkhuu signed IBRD, IFC and IDA Articles of Agreement becoming the 155th member of the Bank. (Photo courtesy of The World Bank Group Archives)

In order to know the way forward, it helps to review the past.

It was 25 years ago, as the global order changed with the sweeping transitions from plans to markets, that Mongolia joined the World Bank. Within a decade, it was a member of all five institutions that make up the World Bank Group.

Mongolia’s decision to join the international financial institutions came as old political blocs and economic alliances were crumbling, and a new epoch of globalization was just beginning.

For Mongolia, the loss of Soviet aid and the imminent collapse of old trading arrangements led to economic and human hardship. Joining the World Bank meant expanding the range of partners and integrating with the rest of the world.

The headlines of those 25 years are not hard to determine. We can easily find the sum of the financial flows (more than $800 million) and identify the sectors supported, the social and economic issues analyzed and the technical assistance provided.

But headlines don’t tell the full story of more than two decades of partnership and collaboration. What have been the impacts and achievements?  How has the nature of Mongolia’s relationship with the World Bank evolved over that quarter century?  What does the future hold?

Such questions demand more than a single article or celebratory event. Indeed, understanding how you got to where you are is as important as where you are. With that concept in mind, we will be embarking on a journey of 25 years in 25 days to fully explore the shared history of Mongolia and the World Bank.

Starting next week, we will review the key milestones year by year — from the signing of the Articles of Agreement in February 1991 to the signing of the Voluntary Code of Practice on Water Management in February 2016; from the first loan for Economic Rehabilitation to the latest grant on Mainstreaming Social Accountability; from the 1991 report titled Mongolia—Toward a Market Economy to the November 2015 Mongolia Economic Update.

In the earliest days, much of the World Bank’s support was aimed at helping Mongolia cope with the transition, on survival and rehabilitation—keeping the mines and power plants operational and the coal deliveries on schedule—and on building the rudiments of a private sector and new financial and legal systems.  As the years went on, attention to poverty and human development deepened, as did support for rural livelihoods.  Citizens were given voice on public expenditure allocations at soum level and below.  An early project supported Mongolia’s rural infrastructure; a later project helped develop Mongolia’s Internet infrastructure.

In trying to better understand how the paths of Mongolia and the World Bank supported, reinforced and depended on each other, I have been writing to colleagues who worked in Mongolia for their reminiscences and reflections. Their stories reveal what the World Bank brought to Mongolia, as well as what Mongolia has brought to the World Bank and beyond: lessons and good practices in public financial management that are the envy of many peers in former socialist countries; the world’s first index-based livestock insurance system; proof that widespread adoption of solar technology at the household (ger) level is not only feasible but helpful, efficient, and sustainable.

How will Mongolia’s economy and society develop over the next 25 years? That question raises many more — did anyone foresee in 1991 that Mongolia would be so driven by mining 25 years later? Yet some predictions are as certain today as they were 25 years ago. We know that Mongolia’s increasingly educated and sophisticated population will continue to move the country forward.

Whether it is in mining governance or education, in environmental protection or crisis response, in herder protection or information and communications technology development, it has been an honor for the World Bank to accompany Mongolia on its development path.