Tax reform is high on the agenda in Ukraine and for a good reason. The current tax system is complex, ineffective and inequitable. There are a large number of exemptions and loopholes for special interests.

As a result, the tax base is narrow and the effective tax burden on the law-abiding citizens and companies is very high. This tax system, coupled with a large, inefficient and corrupt tax administration, undermines Ukraine’s competitiveness, encourages widespread informal economic activities and stunts the country’s growth.

But tax reform can also backfire, undermining fiscal stability and investor confidence, if an abrupt reduction in tax rates without sufficient broadening of tax base results in a loss of revenues. The important point is that any tax reform in Ukraine needs to be affordable.

The standard VAT rate, at 20 percent, and the corporate income tax rate, at 18 percent, are broadly in line with those in other European countries.

While the personal income tax rate in Ukraine at around 16 percent, is less than the European average, the total tax on labor (including social security contributions) is very high at 56 percent in Ukraine compared to 20 percent in Georgia, 36 percent in Poland, and 41 percent in Slovakia.

Ukraine’s total labor tax is not only too high but also inequitable. This creates incentives for under-reporting of wages and employment and discourages businesses from investing and creating jobs in Ukraine.

At the same time, Ukraine’s tax base is eroded by exemptions, tailor-made waivers and loopholes that have enabled special interests to engage in tax avoidance and tax evasion. For instance, in 2013, actual VAT collection was only 44 percent of the potential VAT collections - the VAT revenues that would be generated if the statutory rate were applied to all tax payers. Removal of these exemptions, tailor-made waivers and lucrative loopholes would not only broaden the tax base and increase revenue collection, it will also help promote a level-playing field for the private sector. This should be a top priority for any tax reform in Ukraine.

To deal with these daunting challenges, two proposals for tax reform have been put forward: one by the Ministry of Finance and another by members of Parliament. Both proposals seek to lower the tax burden.

The Ministry of Finance focuses on lowering the excessively high labor tax, while parliamentarians propose cutting tax rates across the board.

Any cuts in tax rates normally translate into reduced budget revenues in the short term.
Under tight fiscal conditions, this requires cuts in public spending, which affects health, education, pensions, and other important services.

The Ministry of Finance’s proposal to reduce social contributions to 20 percent could reduce budget revenues by as much as 2.5 percent of gross domestic product in 2016 and create an Hr 60 billion ($2.6 billion) gap in the budget.

This would also increase the deficit in the financing of the national pension system, which is already subsidized from the budget by about 30 percent.

The parliamentarians’ proposal envisages cutting rates for the VAT, personal and corporate income taxes and would cost an additional 4 percent of GDP and create a budget gap of up to Hr 200 billion ($8.7 billion), or 6.5 percent of GDP in 2016. Such a large budget gap clearly cannot be closed by simply cutting expenditures and will derail Ukraine’s hard-won, fragile macroeconomic stability and could plunge the country back into deep recession and hyperinflation.

The hope behind the tax reform proposals is that cutting tax rates would shrink the informal economy, improve compliance, and hence bolster revenues. However, international experience shows that these benefits rarely materialize in the short term and without complementary measures to broaden the tax base and improve tax administration. Georgia’s successful tax reform of 2004-07 is a case in point. While the number of taxes and tax rates were indeed reduced considerably, these measures were coupled with highly effective measures to improve tax administration, broaden the tax base and fight corruption. Furthermore, tax reform in Georgia was coordinated with an overall effort to streamline the public sector and reform the pension system.

In Ukraine, the under-reporting of wages and employment to evade taxes is such a lucrative and deep-rooted practice. Firms are likely to find it more profitable to continue operating in the informal economy unless the right balance of rate reductions and improved enforcement is achieved. Reduced corruption and more efficient service provision may help, but this will require time to deliver results.
We would, therefore, recommend a gradual approach to reducing the rate of social security contributions.

A transition period would allow the reduction in tax rates to be phased in as measures to broaden the base and improve tax administration take root. At the same time, tax reform would need to be accompanied by revamping the whole system of public sector governance, including service provision in health and education, pension system, improvements in government effectiveness in general, and in tax administration in particular. The timing of all these efforts needs to be properly aligned.
Given the fragile macroeconomic environment, fiscal stability and sustainability must remain a top priority for Ukraine’s decision makers. Tax reform is much needed but it should be equitable and affordable. 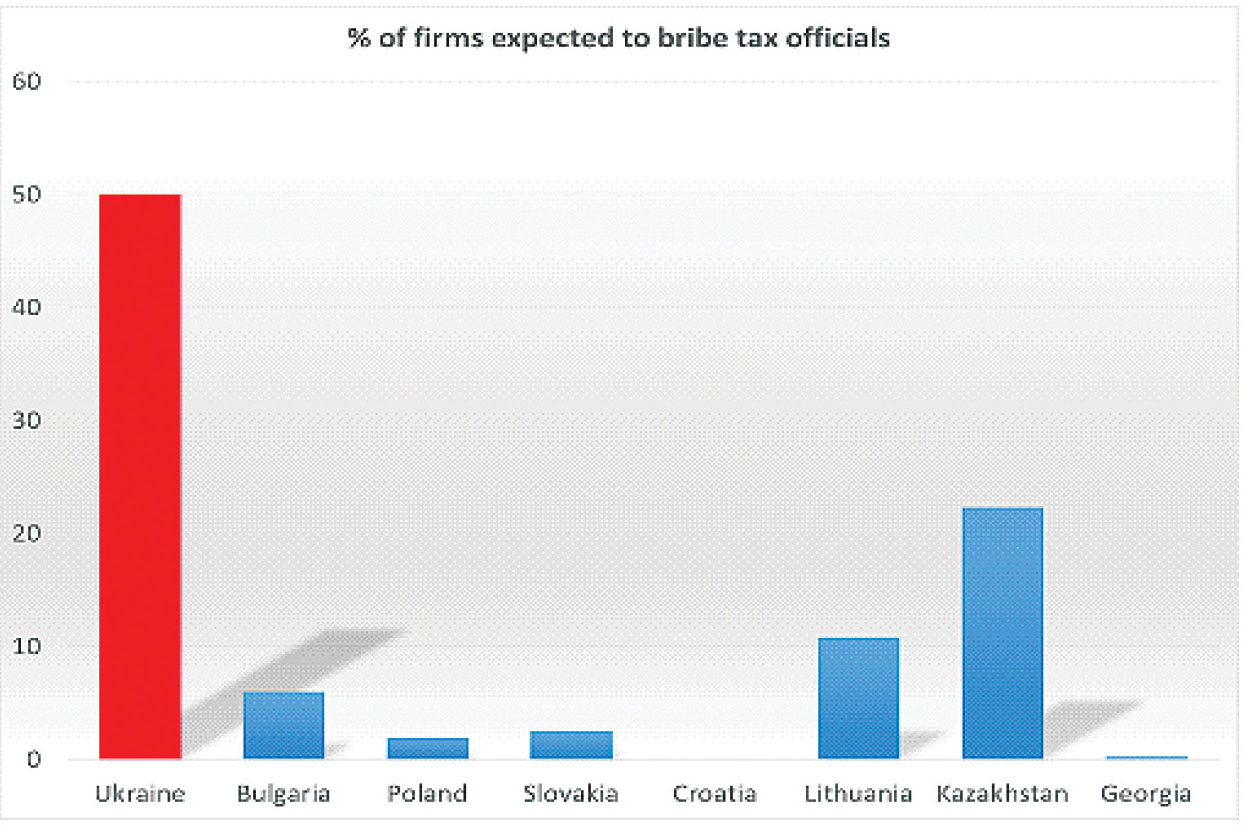 Ukraine has many tax inspectors, much bribery. 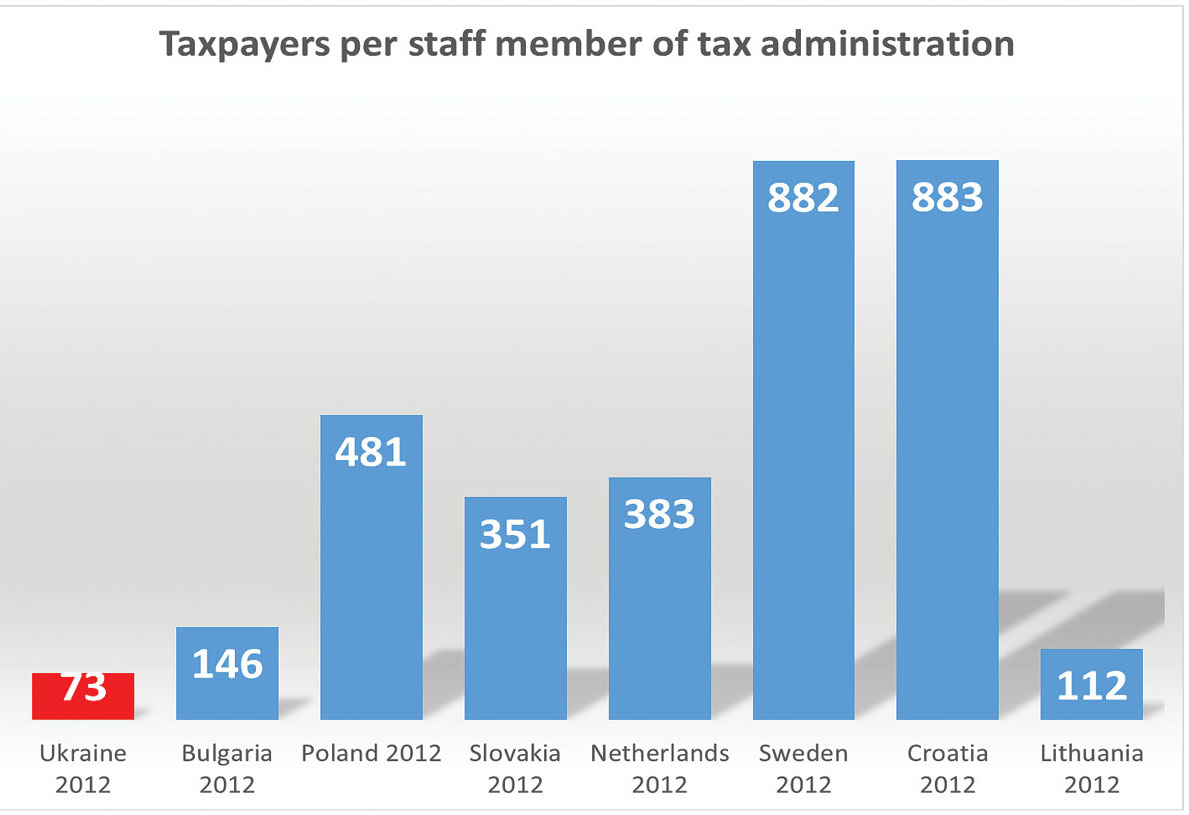 Every government tax inspector in Ukraine is responsible for only 73 taxpayers, fueling the expectation by more than half of companies that they will have to pay bribes.

Qimiao Fan is the World Bank country director for Belarus, Moldova and Ukraine.