April 9, 2015
Ana Maria Munoz Boudet and Will Wiseman The Globalist

Over recent years, Turkey has seen steadily increasing female labor force participation, albeit from very low levels. Gains in education have been moving more women into the labor force, confirming what we see in other countries.

Women who invest more in their education are more likely to work, as jobs matching their skills become available. Many have found jobs in Turkey’s expanding service economy. Growing aspirations to enjoy a modern middle-class life style have provided an additional push for women to enter and remain in paid work.

But a new concern has risen to prominence in the domestic debate over women’s economic empowerment: Could the expansion of job opportunities for women precipitate a decline in fertility?

Conservatives argue that safeguarding the family and ensuring that Turkey’s fertility does not fall below replacement should be priorities. Promoters of gender equality see a danger that the pro-natalist rhetoric may thwart the limited progress women have made in Turkey’s labor market.

A balance between family and work

This is a false dichotomy in our view. Policy has a big role to play to ensure that women do not have to choose between having children and earning an income, and developing their professional careers.

Indeed, getting the balance right is critical to ensure that Turkey experiences a healthy demographic transition and completes the transition to high-income status that the country rightly aspires to.

A quick international comparison reveals where the concern over declining fertility comes from. It took Turkey only 10 years to go from nearly three children per woman to the current level — just above the rate that would stabilize the population in the long run. That same process took over 50 years in Europe (Figure 1).

Results from the most recent Demographic and Health Survey show that fertility has stabilized at 2.26 children, a level similar to the 2.23 children observed in 2003.

Nonetheless, the Turkish government is worried that, based on past trends, the decline in fertility may resume. Better-educated women have tended to have lower fertility and female education levels have rapidly increased over the past 15 years.

Turkey’s government is not alone in aiming for higher fertility rates. Policy makers in emerging markets want to halt the decline in fertility to lengthen the “demographic window of opportunity,” during which dependency ratios remain low and a growing labor force boosts economic growth.

But these are the same broad economic objectives behind the drive for higher female labor force participation in many countries, including Turkey.

Indeed, estimates suggest that because Turkey’s female work participation rate is well below its OECD peers, if Turkey was to have no gender inequality in labor force participation its per capita income may be increased by as much as 22% bringing it up from its current level of $10,970 to about $13,383.

The snag is that the majority of Turkish women do not return to the labor market after marriage and childbirth. In aiming for more children, would Turkey need to forego the economic as well as the broader social gains of greater female labor force participation?

The country’s new Program for the Protection of the Family and Dynamic Population Structure aims to answer such concerns. Three key interrelated policies stand out among the 37 different parts of the program.

The first is a “Maternity Gift” measure, paying cash for a couple’s first three babies – Turkish Lira 300 ($113) for the first born, TL 400 ($150) for the second and TL 600 ($226) for the third. This initiative is similar to baby bonus programs that have been tried and tested in a number of other countries.

The second measure is that parents (both men and women) will be offered the right to paid part-time work all the way through to when their child starts primary school. Differing lengths of state subsidy to the families’ wages would depend on the number of children – a policy similar to the one recently announced by a private company for its employees globally.

Get The Globalist’s latest headlines in your email inbox three times a week. Sign up here.

The third measure is another big policy push on increasing access to affordable quality childcare for families. Such care currently remains at extremely low levels in Turkey and continues to be identified as a constraint to women’s labor force participation.

Experience with policies in other countries

What does the experience in other countries say about the likely success of this new policy initiative?

International evidence from 18 OECD countries suggests that a comprehensive policy package to support working parents during their children’s early years is needed. That policy would reconcile women’s choice about having children with their continued attachment to the labor market.

Of all the policies studied, however, the provision of childcare services for children starting under the age of three and continuing until the child’s entry to primary school has the largest potential to influence fertility.

Access to childcare also has a larger potential to influence women’s decisions to enter and return to the labor market after childbirth. It is thus extremely good news that Turkey’s program recognizes the importance of better and affordable childcare.

Given how far Turkey is behind international benchmarks in this regard (See Figure 2), there is much room to improve, which should help both stabilize fertility and boost female labor force participation.

Compared to the importance of childcare, evidence on the other two prominent components of the program is more mixed. While targeted cash bonuses can influence the timing of births, they tend not to increase the total number of children and, depending on the amount of the payment, can even have a negative effect on maternal employment.

In addition, the international evidence on policies that increase mandatory access to part-time work for women and men is inconclusive. While women in particular may welcome the option to work part-time, a right to part-time work after childbirth may deter employers from hiring women in the first place.

Against this background, the recent debate in Turkey should be welcomed. Our surveys indicate that the majority of Turkish women desire to have at least two children.

With the right policy package in support and, in particular, with a focused expansion of childcare and early childhood education, women can continue to enter the labor market.

That will allow them to enjoy professional development and economic empowerment as well as to provide economic benefits to their families and to their country as a whole.

Figure 1: The precipitous decline in fertility in emerging market economies 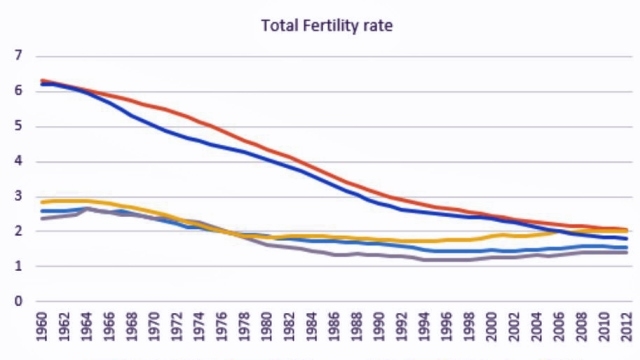