“Greetings! Sir, we purchased a property worth 11,000 Euros. We paid a tax for the purchase of 800 Euros and paid a bribe of 400 Euros for property registration”.

Citizens from the Pakistan Province (state) of Punjab - population of over 100 million citizens - send numerous SMS messages similar to this to Shahbaz Sharif, Chief Minister of Punjab, on a daily basis. Messages are then processed and consolidated feed-back on government services is posted on a public dashboard for everyone to see. But, more importantly, they provide Punjab’s administration (and the Chief Minister himself) with real time data about the delivery, quality, and efficiency of various public services. The key is, of course, that Sharif and his government follow up on the information they gather: fixing service delivery problems where they arise, rewarding bureaucrats for the good work and/or punish them for the lousy one.

" The point we are trying to make is that modern but simple and relatively cheap technologies give us the opportunity to dramatically improve public management systems and the delivery of essential services for the benefit of the people. " 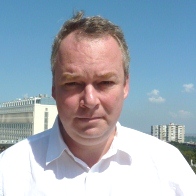 Country Manager for Serbia and co-author of the "Logged On"

It all started when Sharif decided to use modern technologies (cell phones) to improve public services in Punjab. He first recorded a voice mail that is sent to every citizen using about 70 selected  public services (ranging from property registration to agricultural extension, from health services to emergency police services) asking them to provide feedback. “If you had to face any difficulties, or if someone received unfair gratification from you, or asked for money; kindly inform us”, says, among other things, Sharif in his voice mail.

He is also sending an SMS message to citizens using public services in which he says: “Please let me know how your experience was – did you have to give a bribe?” They also gave field workers smart phones with which they were obliged to record their own visits to citizens (for instance agriculture extension workers). Almost none of these phones ever got lost, as officials knew the Chief Minister takes service delivery seriously.

Citizens obviously think Shahbaz Sharif is doing a good job since he was reelected as Chief Minister with a large majority. As an example, using the combination of proactive feed-back and field worker reports the number of cases of dengue (a lethal disease) fell from 21,000 in 2011 to 258 in 2012, under similar conditions, as combined inputs pinpointed the causes of the spread of the disease and helped addressing these.

You can find more details about this and many other examples of how one can use cell phones to improve lives of people in the book “Logged On”, that I wrote with my two colleagues and which was recently published by the World Bank.

The point we are trying to make is that modern but simple and relatively cheap technologies give us the opportunity to dramatically improve public management systems and the delivery of essential services for the benefit of the people.  Technology also allows, for the first time, to reliably measure government service delivery results in almost real time.

In order to improve/reform public services reliable data are critical. For example, many think in this country that there is a lot of favoritism and unequal treatment in public service delivery (from health services to property registration to construction permits). But without hard data this is only a perception, and also does not tell us what exactly the issue is that prevents services from being delivered. Gathering this information in traditional manner takes a long time and faces a lot of hurdles imposed by various vested interests. The same goes true for traditional monitoring and evaluation approaches.

Sharif’s model can help you get the data quickly and directly. Smart IT-based dashboards help to process and catalogue this information and provide real time performance reports to the Chief Minister and his ministers, while secretaries general of departments are held responsible for taking corrective measures, be it structural or specific.

Of course there are still many issues to resolve - from protecting privacy to checking the reliability of information - but first results are encouraging. Other advantage of modern technologies is that electronic communication (cell phones, internet, and social networks) is available to (almost) all citizens. And last, but not least, a new generation of leaders (such as Sharif) that is willing to use technology to their (political) advantage is emerging.

In addition, using technologies such as cell phones and smart phones is relatively cheap and universally available, while any country with good IT expertise can design an actionable dashboard system. Technology therefore enables impartial use of performance benchmarks to create a positive dynamic around service delivery. They can even address the issue raised by one of my colleagues in the Belgrade office. She said she didn’t want to get a voice mail or an SMS from any of the ministers. She’d rather hear the message from Novak Djokovic. Well, I am sure new technologies can help there, or maybe the government can even ask Mr. Djokovic for a serv(e)ice….