Every sunset, Salamatu Bangura makes her way down to the shores of Bonga Wharf, about 20 miles southeast of Freetown, Sierra Leone. There, she greets the pink skies and familiar faces of the fishermen who loan her fish that she will later sell at the local market. On good days, she uses the profits to feed her four children. But on the other days, they go to sleep hungry, for Salamatu cannot afford to cook each day.

That was until she had access to the Ep Fet Po social safety net program.

“Since this program came, I can buy fish for my business and I no longer have to borrow,” she smiles. “Now, I can cook every day. Now I am able to feed my kids before and after school.”

Just $15 a month through a cash transfer has helped Salamatu move out of extreme poverty and afforded her family better health and education, giving the next generation the opportunity to break the cycle of poverty and prepare for the jobs of the future. In a country like Sierra Leone that is reeling from a series of shocks, investments in people have emerged as a game changer. Safety nets are becoming even more critical during the COVID-19 crisis, because they protect people’s lives and livelihoods, helping them weather the storm.

Building human capital—the health, knowledge, capabilities, skills and resilience that people accumulate throughout their lives—is critical to ensuring that all girls and boys have the opportunity to reach their full potential. This is especially true across Africa, which is home to the world’s youngest population, and also to some of the toughest human capital challenges.

That is why the World Bank Group in 2019 launched the Africa Human Capital Plan to propel investments and reforms to improve human capital.

“To ensure that all people—not just those lucky enough to be born into relative geographic, gender, ethnicity or socioeconomic privilege—can fulfill their potential, building human capital must be at the center of every country’s development priorities,” said Annette Dixon, Vice President of Human Development for the World Bank.

"The COVID-19 crisis emboldens us to stay the course. We must not let the challenges of our lifetime become the next generation’s burden." 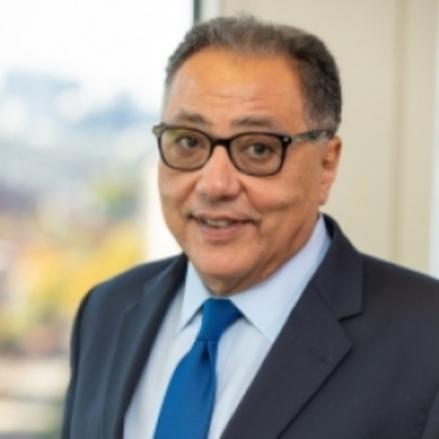 The plan sets out specific targets and financial commitments as part of the Human Capital Project, a global effort to accelerate more and better investments in people for greater equity and economic growth. One year after the launch of the Plan, there has not only been a significant scale-up, but also a shift in World Bank support to African countries. The Bank has committed close to $7.5 billion in financing specifically for human development projects over the past year (a more than doubling compared to the previous year), while also enhancing support to human capital across agriculture, social inclusion, water, sanitation and other sectors.

, and women and girls are bearing the brunt of these impacts. Behind the unsettling numbers, however, there is also a story of hope and a powerful message for the world and its policymakers: investments in empowering women—through access to quality education, pathways to jobs and sexual and reproductive health care—are now more important than ever before.

“Investing in women and girls is essential to deliver on the promise of development. It’s that simple,” said Hafez Ghanem, World Bank Vice President for Africa. “That’s why we have helped our clients with over $2.2 billion of new World Bank-financed projects investing in women’s health, education, and job opportunities.

These projects are addressing multiple constraints that women and girls face, including by combatting child marriage by strengthening girls’ education, focusing on family-planning services and ensuring stronger legal frameworks for the protection of women and children. All of this can support African countries in accelerating their demographic transition— a shift from high birth and infant mortality rates, to low birth and death rates. 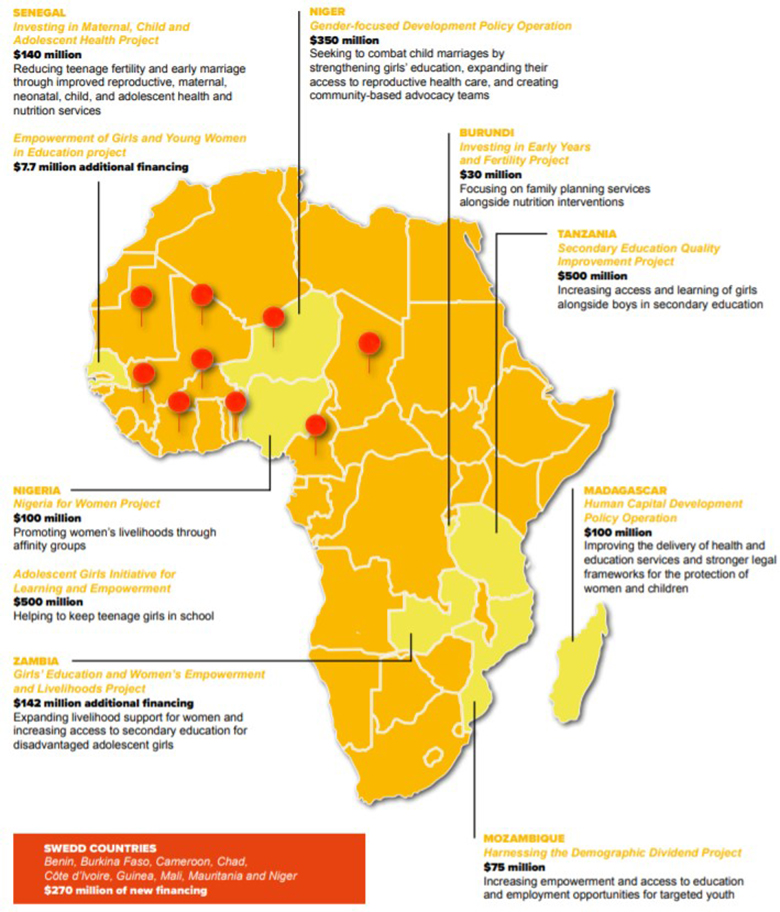 One such project is the flagship Sahel Women’s Empowerment and Demographic Dividend (SWEDD) project. By mobilizing religious leaders, SWEDD is helping change social norms and behaviors toward women and girls like Lemeima mint El Hadrami, who lives in the Sahel.

Lemeima is from Mauritania and got married when she was 13. She dropped out of school immediately because her pregnancy was difficult. She would go on to have two daughters. Her husband would leave her.

“I refused to marry off my daughter for a simple, good reason: I want my daughter to be empowered,” Lemeima said. “I don’t want her to go through the same difficulties that I did. I would like her to have a good job. She could become a minister, a doctor or a midwife.”

The $680 million SWEDD project is helping countries empower women and adolescent girls; increase their access to quality reproductive, child, and maternal health services; and build policy agendas that put demography and gender at the center of growth.

Human capital challenges and poverty are increasingly concentrated in fragile contexts. This means that just . For example, Liberia is in the midst of recovering from a decade-long conflict, and more recently, the Ebola crisis which took nearly 5,000 lives.

With more than 60 percent of the population under the age of 24, the need for more wage employment is in the spotlight. A small-business program is changing the odds for young Liberian women impacted by Ebola, by providing income generation support and training on how to create their own self-employment and learn from each other.

“We teach them about business, how to keep records and save their money,” said Rebecca Totimeh, one of the mentors of the program. “I decided to help because I want to see young girls at work and promoting themselves.”

By the year 2030, half of the world’s extreme poor will be living in such fragile settings in a handful of countries—most of which are in Sub-Saharan Africa. To this end, the World Bank has prepared $2.5 billion in new investments in fragile countries in the 2020 fiscal year—with a focus on the different impacts on women and men. 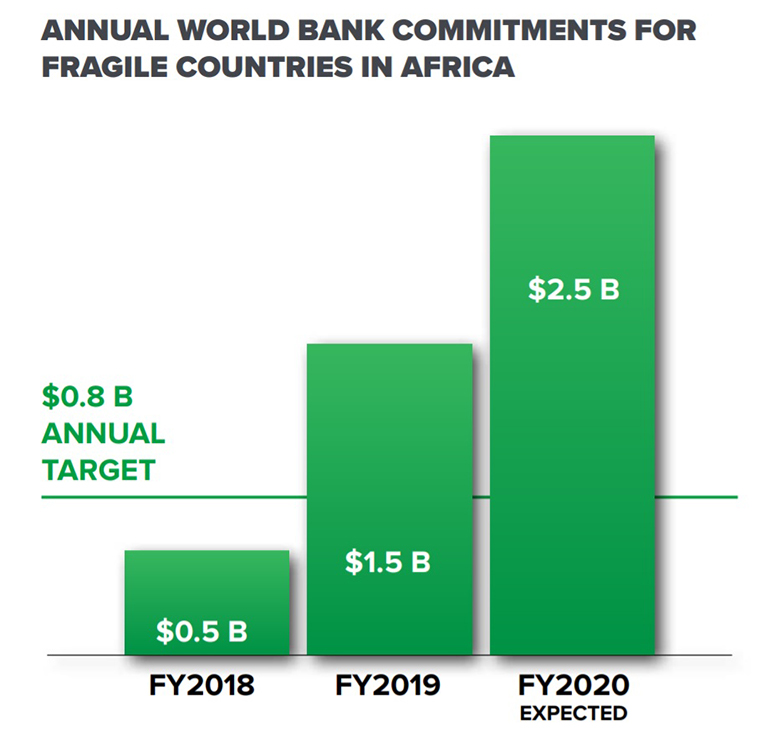 For example, In Cameroon, the proposed $125 million Secondary Education and Skills Development Project is expected to increase equitable access to quality general education and technical training, especially for girls.

Putting people at the center of technology interventions and other inventions like behavior change is driving outcomes across sectors in the region. In Nigeria’s Edo state, for example, the existing EdoBEST program is being re-purposed to help prepare students for their next grade level in September 2020—using self-study packets and interactive quizzes distributed via WhatsApp, radio, mobile phones and online channels. And further lessons on using technology to reach all learners are emerging across the region.

“As part of Sierra Leone’s response to COVID-19, we are driven by a national innovation and digital strategy,” said David Sengeh, Minister of Basic and Senior Secondary Education and Chief Innovation Officer of Sierra Leone. “That strategy has two principles: mobile-first and hybrid systems that intentionally capture everyone. And of course, technology must be combined with human empathy, communication, and an understanding that it’s in everyone’s interest to address the current global crisis in education.”

Meanwhile, in Cameroon, a university supported by the Africa Centers of Excellence (ACE) project is using 3D printing techniques to print face masks. Across Cote D’Ivoire and Guinea, the West Africa Unique Identification for Regional Integration and Inclusion Project is increasing the number of people with government-recognized identity that gives them access to basic services to protect and build their human capital. Furthermore, technologies like blockchain, artificial intelligence and machine learning are also fueling the delivery of projects and services to people across the region. And the Geo-Enabling Initiative for Monitoring and Supervision—which provides geolocated data focused on fragile countries—is now being used in 450 projects in nearly 30 countries.

Safeguarding outcomes, responding to the pandemic

Africa’s human capital is hard hit by COVID-19. Lives have been lost; schools have been closed; and as hospitals struggle to cope with the influx of new patients, vaccination rates are falling, and maternal mortality is on the rise. Furthermore, data shows The pandemic also comes on the heels of existing major food security threats, given widespread diseases and pest pressures.

The emergency health response already underway supports countries in the prevention, detection, and treatment of the disease, with World Bank financing in the Africa region expected to exceed $1 billion.

The pandemic has also revealed the benefits of earlier human capital investments. For example, in Ethiopia, the existing Second Urban Water Supply and Sanitation Project was urgently mobilized to support staffing, resources and transportation for water utilities during the pandemic. And in Kenya, the Wajir Country Referral Hospital went from being a modest one-room hospital unit, to a state-of-the art facility that is now one of five labs designated a COVID-19 testing site.

These examples show that

“The COVID-19 crisis emboldens us to stay the course,” said Vice President Hafez Ghanem. “We must not let the challenges of our lifetime become the next generation’s burden.”

PUBLICATION: Protecting and Preserving Africa's Human Capital in the Face of COVID-19

BLOG: In French, COVID-19 Is Feminine. What If the Cure to the Pandemic Is Also Decisively Female?

EVENT REPLAY: Beyond Now: Protecting People Through Innovation and Good Policy  in the COVID-19 Era