Lakshmi Perera, a 48-year-old woman from Kalutaram, Sri Lanka had trouble losing weight. She started going to a healthy life center the government set up to beat the growing rates of non-communicable diseases in the country. Her life has transformed ever since.

“They taught us how to eat healthy and how to stay fit, but it was not always easy to do,” Perera said. “Now, I have joined an exercise class and within six months I lost 10 kilos.”

In Sri Lanka—the fastest ageing population in South Asia—the country is facing a population over 60 that is expected to double in the next 25 years. With the support from the World Bank, the government has established Healthy Life Centers to help prevent, detect, and treat non-communicable diseases at the community and primary healthcare levels. The Centers target vulnerable poor populations, men and women over 40 years old, and teach at them about the risk of NCDs and how to prevent, detect and manage them to be able to live healthier and more fulfilling lives.

“I get the push I need, I can feel firsthand the benefits of losing weight, and I am more motivated than ever to continue my weight loss journey,” said Perera.

Despite increases in life expectancy, the rise in chronic and non-communicable diseases have become a global threat.

Chronic and non-communicable diseases have become a growing concern in all countries irrespective of income level.

“One of the most effective ways to address non-communicable diseases is by ramping up investments in affordable, quality primary health care”, says Dr. Muhammad Pate, Global Director for Health, Nutrition and Population at the World Bank. “This makes sense both from a health and an economic perspective. Putting more resources on the frontlines to detect and treat conditions early, before they become more serious, saves lives, improves health outcomes, reduces health care costs and strengthens outbreak preparedness.”

Busting a myth: Obesity is no longer a problem of high-income countries alone

A new World Bank report “Obesity: Health and Economic Consequences of an Impending Global Challenge” sheds light on the growing obesity epidemic and its negative impacts.

It also provides many of the current trends concerning overweight and obesity.

Recent data show that since 1975 obesity has nearly tripled and it now accounts for 4 million deaths worldwide every year. In 2016, over 2 billion adults (44 percent) were overweight or obese, and more than 70 percent of these live in low- or middle-income countries. 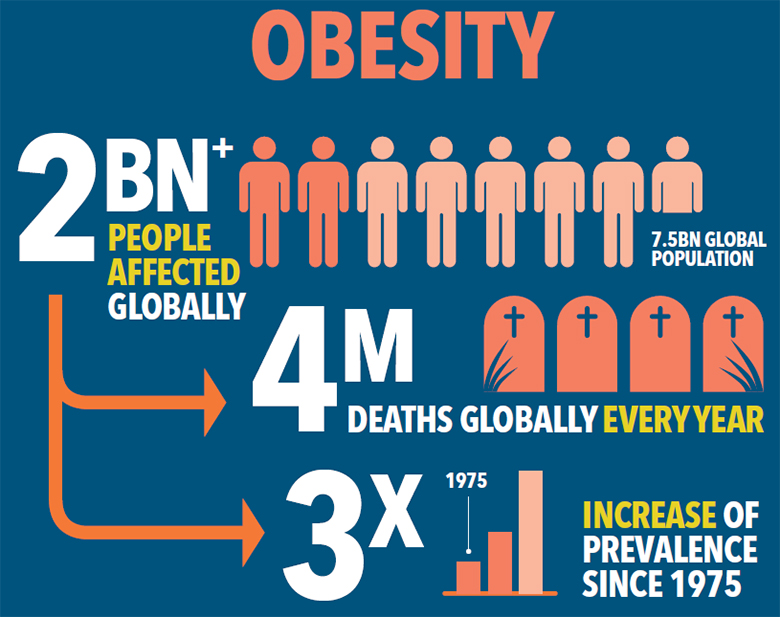 Infographic: The Crippling Costs of Obesity

These include: easier access to ultra-processed and sugary foods; a decline in physical activity linked to technological advances in the labor force and at home; and greater consumption of unhealthy foods often linked to an increase in wealth and income.

Exposure to environmental risks, such as air pollution, and constrained access to basic services also contribute significantly to the epidemic.

“Reducing overweight and obesity is a global public good,” said Annette Dixon, Vice President for Human Development at the World Bank. “Proactively addressing this issue will contribute significantly to building human capital, ensuring higher economic growth, and sustaining a workforce that is healthy and prepared for a productive future.”

Costs and impacts of obesity

It is projected that

For example, in China between 2000 and 2009, health care costs associated with obesity grew from half a percent to more than 3 percent of China’s annual health care expenditure.

In Brazil, obesity-related health care costs are expected to double, from less than US$6 billion in 2010 to more than US$10 billion in 2050.

It is not only the health care costs, but also the indirect costs due to reduced work productivity, absenteeism, early retirement, etc., that the society and individuals will have to bear. For example, one study estimated an increase of the ‘indirect costs’ of overweight/obesity in China from 3.6% of GNP in 2000 to 8.7% of GNP in 2025.

Research shows that investments today in cost-effective interventions could save 8.2 million lives in poorer countries and generate US$350 billion in economic benefits by 2030. This is equivalent to a return of US$7 per person for every dollar invested.

This double burden translates into changes in family structures, as family members, particularly women, become the de facto care-givers for older adults. In addition, poor people experience a greater share of the problem as they are more vulnerable to health and economic shocks.

As countries experience economic growth and food system changes, so does the temptation of people to consume unhealthy foods and exercise less.

"Reducing overweight and obesity is a global public good. Proactively addressing this issue will contribute significantly to building human capital, ensuring higher economic growth, and sustaining a workforce that is healthy and prepared for a productive future." 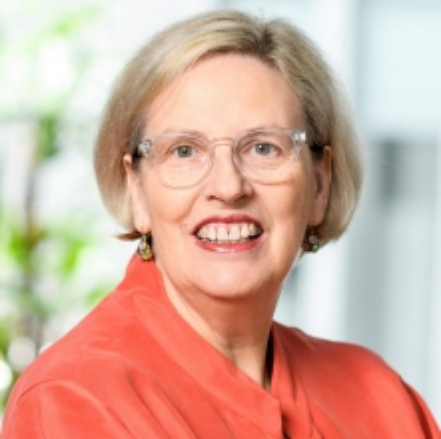 The World Bank’s support to meet the SDGs

With just ten years before the 2030 deadline for the Sustainable Development Goals, the international community, including the World Bank, is scaling up efforts to tackle the rise in non-communicable diseases.

To protect future generations, governments and development partners will need to adopt a comprehensive approach based on stronger primary health care systems with a focus on preventative measures.

The World Bank is helping governments strengthen their health care systems and build capacity to identify and address risk factors. Through financial support, policy advice, and technical assistance, the World Bank is responding to countries’ demand to sustain a healthy workforce and build human capital.

In Egypt, the country decided to eliminate the growing risks of non-communicable diseases, with a set of initiatives to protect the health of populations and reorient the country’s health system toward delivering inclusive, equitable and higher quality healthcare. The country launched a universal health insurance, improved health care quality in public hospitals and the targeted specific diseases as national priorities.

With the support from the World Bank, Egypt launched a ‘’100 Million Healthy Lives’’ nationwide campaign to help screen hepatitis C and non-communicable disease risk factors (such as overweight/obesity status, diabetes and blood pressure).

In Argentina, the government sought help from the World Bank to improve the capacity of its public health facilities to deliver higher quality services and protect the most vulnerable people against prevalent non-communicable risk factors. Between 2015 and 2019, the project led to expanded coverage for prevention, diagnosis, and treatment and now includes tuberculosis testing and treatment, safe blood and control of non-communicable and lifestyle-related diseases.

Learning from successful country examples, the World Bank has also identified a series of promising interventions such as the mandatory labeling of processed foods; increased consumer education; strong fiscal policies, such as taxation of unhealthy foods; investment in early childhood nutrition programs; and enhanced urban design, such as playgrounds in schools and walking and bicycle paths.

In Tonga, the government introduced a “healthy taxes” system which is primarily intended to disincentivize the spending and reduce consumption on unhealthy consumer products, such as tobacco, alcohol and sugary drinks. It asked the World Bank to evaluate the effectiveness of this fiscal policy which, overall, suggested positive changes in people’s consumption and spending habits once the taxes were introduced.

In Peru, a country known for cutting child stunting (low height for age) prevalence by more than half, in a decade, between 2008 and 2016, the government is redesigning the country’s health services to deal with chronic diseases. The new World bank-funded Integrated Health Networks Project will support more than 20 million people who have no public or private healthcare coverage.

This new model of care will focus on each Peruvian throughout her lifecycle and provide continuity of care to include outpatient prevention, control, and treatment of chronic diseases and adult care.

Some countries have also found simpler ways to treat them by making lifestyle adjustments through proper nutrition.

In the south Indian state of Kerala, the World Bank is working with the government to educate people and food producers. The goal is to reduce trans-fat and salt in commercial foods, particularly those produced in bakeries, restaurants, and deep fired food outlets by sensitizing them to the harmful effects of oils that contain trans-fat and viable substitutions.

Other measures include using primary health care as an important entry point for individuals into the health system to improve a country’s ability to manage the burden of chronic diseases.

In Tajikistan for example, ischemic heart disease is one of the leading causes of death. The World Bank is supporting the government to improve the coverage and quality of basic primary health services in rural health facilities to ensure better early screening.

Along with overweight and obesity-related non-communicable diseases, cancers will be one of the top three causes of premature death by 2030, with over 22 million new cases of cancer and nearly 13 million cancer-related deaths worldwide. More than half of all new cases and two-thirds of cancer deaths will be occurring in low- or middle-income countries.

A global action with a whole of society approach

To make progress on human capital outcomes, countries will no longer be able to neglect non-communicable diseases, nor one of the factors underlying it --obesity.

While some have already begun tackling the issue, this will require a whole-of-government and whole-of-society approach-- working across health, education, social protections but also climate, urban and transport, including through the private sector and dedicating adequate resources to protect future generations.

The time to act is now.

Video: Obesity is Only a Rich Country Problem, Right? Wrong.

Infographic: The Crippling Costs of Obesity