Fighting Malnutrition in Peru: Enhancing the Demand for and Supply and Governance of Health and Nutrition Services in Three Regions 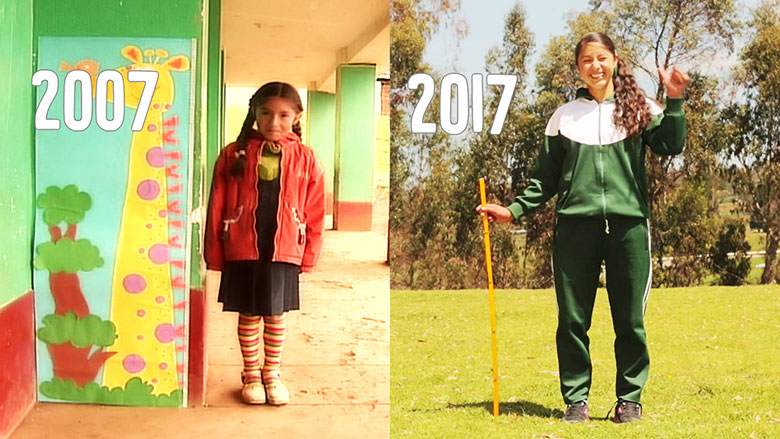 Using a multisectoral approach in the Amazonas, Cajamarca, and Huánuco regions, Peru stimulated demand for health and nutrition services among the poor, increased the coverage and quality of these services, and improved nutrition-related budgetary planning and results monitoring. Through these efforts Peru has more than halved malnutrition among children under five, from 28 percent in 2008 to 13.1 percent in 2016.

By the mid-2000s, despite a decade of high economic growth and declining poverty, Peru’s human development outcomes, especially chronic malnutrition in children, continued to lag. After stagnating throughout the 1990s, the stunting rate began to decline in the early 2000s, falling from 30 percent to a still worrisome 23.8 percent in 2009. In parallel, between 2005 and 2009, an alarming increase in stunting in urban areas was recorded, from 13.5 to 16.2 percent. Great variations in chronic malnutrition rates continued to exist across regions, and a lack of awareness of the problem among parents, a lack of health provider accountability, and weak incentives to improve services contributed to high rates of chronic malnutrition.

By the early 2000s, approximately half a million Peruvian children were starting life at a large disadvantage with lasting consequences for individuals and the nation: Malnutrition can cause permanent damage to a child’s intellectual development and irreversible losses of human capital formation. Peru was putting at risk its ability to make further progress toward reducing poverty and inequality. Action was clearly needed.

The Results in Nutrition for Juntos SWAp was a pioneering intervention—the first of its kind in Peru’s social sectors—that recognized malnutrition as a complex problem related to a high prevalence of infectious diseases, inadequate feeding and caring practices, and low birth weight. The preexisting Juntos program provides cash to poor mothers in exchange for regularly taking their children to health, growth, and nutrition check-ups and ensuring that their children attend school. By extending Juntos affiliation to children younger than 12 months and improving the verification process for children younger than 36 months already in the program, Results in Nutrition was able to focus its benefits on the most crucial period of a child’s development. Results in Nutrition, part of a long-standing engagement between the World Bank and the Peruvian government, tackled chronic malnutrition through analytical work on the country’s health system, reforms supported under the Results and Accountability Development Policy Loan (REACT DPL), and lessons learned during the Scaling Up Handwashing Project, a Bank-coordinated partnership with 50 organizations in Peru fighting malnutrition and promoting behavioral change in hygiene.

Experiences from other countries have shown that malnutrition can be reduced through a multisectoral combination of demand-side interventions (e.g., Conditional Cash Transfer programs, such as Juntos) and measures aimed at increasing the coverage and quality of health and nutrition services. Promoting mothers’ behavioral changes with respect to child health, hygiene, and care and feeding practices also proved to be cost-effective in achieving results and preventing malnutrition in new generations of children. Using these proven methods, this operation aimed to reduce child malnutrition in Peru’s Amazonas, Cajamarca, and Huánuco regions. Specifically, the operation (i) stimulated the demand for health and nutrition services by extending Juntos affiliation to children younger than 12 months, (ii) stimulated improvement in the coverage and quality of health and nutrition services in selected geographic areas, and (iii) supported improvements in the government’s budgetary planning and monitoring of results regarding nutrition services.

The Bank, through the International Bank for Reconstruction and Development, provided a loan in the amount of US$25 million to contribute to the costs of this operation. The Bank also administered two trust fund grants, totaling US$260,000, that supported the financing of related technical assistance activities.

The Bank collaborated with the Inter-American Development Bank, which supported the Juntos program through a budget support loan and a technical assistance grant. The Bank also collaborated with the European Commission, which financed the EUROPAN, a budget support grant of €60 million to the Peruvian government to support the goal of reducing child malnutrition. Strong coordination with bilateral and multilateral agencies took place through participation in donor thematic roundtables. These included Germany’s Gesellschaft für Internationale Zusammenarbeit, the United States Agency for International Development, the UK’s Department for International Development, and the Japanese International Cooperation Agency. In addition, coordination on the nutrition-related aspects of parallel operations included the Gates Foundation and the Nutrition Initiative (a coalition of NGOs, the United Nations, and bilateral agencies). Further support was provided by the Japanese Social Development Trust Fund and the Japan Scaling Up Nutrition Trust Fund, which provided grants (US$180,000 and US$80,000, respectively) to finance technical assistance activities.

Edith Zambrano Reyes and her 17-month old son, Yharif, have benefited directly from Peru’s drive to give children the best possible start in life. “He’s up to date with all his check-ups. He had a few problems with being underweight in the first few months of life but not now. The nurses are very good at explaining how to look out for possible illnesses, like measles or tuberculosis or flu,” said Reyes. “During my pregnancy, I got a lot of advice from the nutritionist about what to eat and what to avoid.”

Peru’s success in reducing malnutrition has been admired by countries around the world. Delegations from foreign countries regularly visit Peru to learn how to adapt the Peruvian approach to their contexts. Despite Peru’s accomplishments in recent years, however, malnutrition continues to be a challenge; 38 percent of indigenous children are malnourished, attesting to the need for further interventions. Anemia, a growing concern, affects 59 percent of children between 6 and 11 months. Both issues remain among the Peruvian government’s top policy priorities. 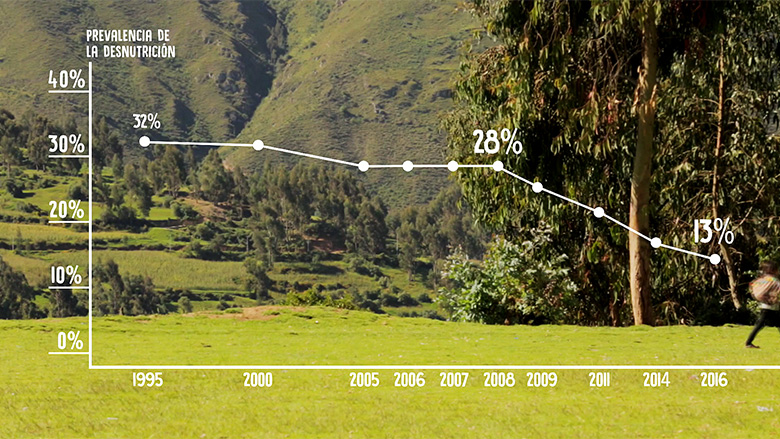