The Tech Revolution That’s Changing How We Measure Poverty

The world has an ambitious goal to end extreme poverty by 2030. But, without good poverty data, it is impossible to know whether we are making progress, or whether programs and policies are reaching those who are the most in need.

Countries, often in partnership with the World Bank Group and other agencies, measure poverty and wellbeing using household surveys that help give policymakers a sense of who the poor are, where they live, and what is holding back their progress. Once a paper-and-pencil exercise, technology is beginning to revolutionize the field of household data collection, and the World Bank is tapping into this potential to produce more and better poverty data.

It wasn’t long ago that to conduct household surveys, data collectors from national statistical offices would set off on a journey across the country to interview respondents on a set of questions, equipped with nothing but a paper questionnaire on which to jot down the information. Most were incredibly diligent. Others, less so. Either way, these data collectors would return to the statistical office, their hand-written notes would be transferred to a computer system, and after a bunch of data calculations, voila: a country’s poverty rate.

Understandably, this method had its flaws. Beyond simple human error, the act of transferring the data from paper to a computer created mistakes.

These days, technology is helping to weed out these data quality issues without changing the underlying process. Data collectors still have to travel to towns and cities near and far, but now they are equipped with tablets, which not only automatically sync survey answers to a centralized system as they are entered, but also include GPS trackers to ensure that those collecting the data are going where they need to and interviewing the right respondents. This has helped cut down on data errors and streamlined the process.

And when data collectors (also called enumerators) cannot travel to certain areas, or when a country simply wants more frequent, real-time poverty and welfare data, mobile phones have become the tool of choice to reach a broad sample of people and better understand their experiences in a cost-effective way. Mobile phone surveys have become a reliable and useful complement to household surveys, and in many cases are enabling countries to reach and respond to their citizens during crises, conflict, and economic shocks when face-to-face data collection would be extremely difficult and when immediate information is critical.

“Technology can be harnessed in three different ways,” says Utz Pape, an economist with the World Bank. “It can help improve data quality of existing surveys, it can help to increase the frequency of data collection to complement traditional household surveys, and can also open up new avenues of data collection methods to improve our understanding of people’s behaviors.”

As technology is changing the field of data collection, researchers are continuing to find new ways to build on the power of mobile phones and tablets.

The World Bank’s Pulse of South Sudan initiative, for example, takes tablet-based data collection a step further. In addition to conducting the household survey, the enumerators also record a short, personalized testimonial with the people they are interviewing, revealing a first-person account of the situation on the ground. Such testimonials allow users to put a human face on data and statistics, giving a fuller picture of the country’s experience.

At the same time, more and more countries are generating real-time data through high-frequency surveys, capitalizing on the proliferation of mobile phones around the world. The World Bank’s Listening to Africa (L2A) initiative has piloted the use of mobile phones to regularly collect information on living conditions. The approach combines face-to-face surveys with follow-up mobile phone interviews to collect data that allows to monitor well-being.

The initiative hands out mobile phones and solar chargers to all respondents. To minimize the risk of people dropping out, the respondents are given credit top-ups to stay in the program. From monitoring health care facilities in Tanzania to collecting data on frequency of power outages in Togo, the initiative has been rolled out in six countries and has been used to collect data on a wide range of areas.

“While collecting data through mobile phones is a relatively recent phenomenon, in five years, this will become a very common approach to data collection,” says Johannes Hoogeveen, a lead economist in the Poverty Global Practice in the Africa region. “The technology revolution has just begun and with the right capacity in national statistical offices and with a proper funding model, the opportunities for collecting data through technology from a development standpoint are limitless.”

Hoogeveen thinks that this approach could work particularly well in fragile and conflict settings as well as during crises such as natural disasters, famine, and pandemics. For instance, mobile phone surveys were used to monitor the Ebola crisis in West Africa, the floods in Dar es Salaam, and the forced displacement in Mali.

But Hoogeveen cautions that the approach is still in its early stages and it needs to strengthen linkages with policy responses so that its true value is realized, and that could help bring in additional funding and aid in further scaling up.

Technology-driven data collection efforts haven’t been restricted to the Africa region alone. In fact, the approach was piloted early in Peru and Honduras with the Listening 2 LAC program. In Europe and Central Asia, the World Bank has rolled out the Listening to Tajikistan program, which was designed to monitor the impact of the Russian economic slowdown in 2014 and 2015. Initially a six-month pilot, the initiative has now been in operation for 29 months, and a partnership with UNICEF and JICA has ensured that data collection can continue for the next 12 months. Given the volume of data, the team is currently working to create a multidimensional fragility index, where one can monitor a set of well-being indicators – ranging from food security to quality jobs and public services - on a monthly basis.

“Using technology to collect data can be seen as a new solution to an old problem,” says Joao Pedro Azevedo, a lead economist with the Poverty Global Practice at the World Bank, who co-leads the Listening to Tajikistan initiative with William Hutchins Seitz. “However, what we really need is a change in our mindset since we often catch ourselves only applying new technology to an old paradigm. Moving forward, we also need to explore what new questions can and should we be asking with this new survey modes, and how to use such platforms to monitor results directly.”

A look into the future

Already, we can see a glimpse of this future. In Tajikistan, the team is installing Smart Survey boxes in selected households to monitor energy usage. Given the country’s massive energy challenge, the boxes are sending automatic data about power outage in real-time and could help monitor energy quality.  The team is also collaborating with the big data unit of the World Bank to calibrate and validate machine learning algorithms trained on geospatial information such as night light, which will enable them to understand the patterns of power outages beyond the 150 locations with the Smart Survey boxes. 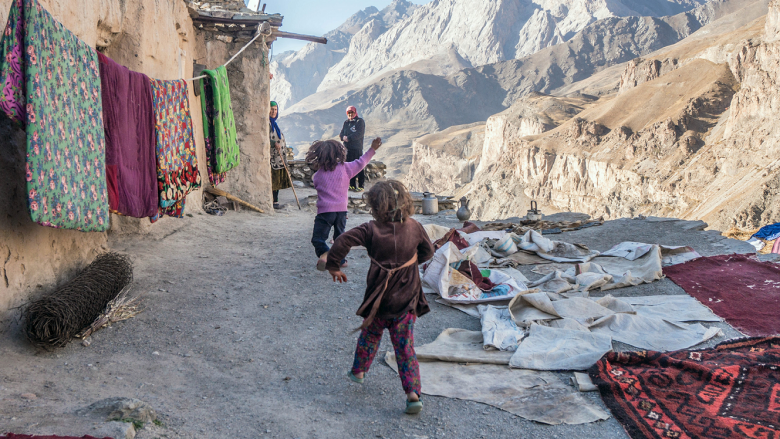 Children run in the mountain village of Pastigov, Tajikistan. The Listening to Tajikistan initiative uses mobile phones to monitor the well-being of people and collects data on a host of indicators ranging from food security to jobs and public services. © Ronan Shenhav/Flickr

In a pilot project in Somalia, a team is using about 200 GPS trackers to study the migration pattern of nomads. The effort will aim to help include nomads being represented in future surveys, provide more analysis on when, how, and where do they migrate, and could help improve public service delivery.

There are other initiatives, such as in Mexico where the World Bank and its partners are using satellite imagery and survey data to estimate how many people live below the poverty line down to the municipal level, or guiding data collectors using satellite images to pick a representative sample for the Somali High Frequency Survey. However, despite the innovation, these initiatives are not intended to replace traditional household surveys, which still form the backbone of measuring poverty. When better integrated, they can prove to be a formidable set of tools for data collection to provide the best evidence possible to policymakers.

Alvin Etang Ndip, a World Bank economist who leads the Listening to Africa initiative, aptly summed up these innovations :

“The tech revolution is really changing the way we work. For the better.”