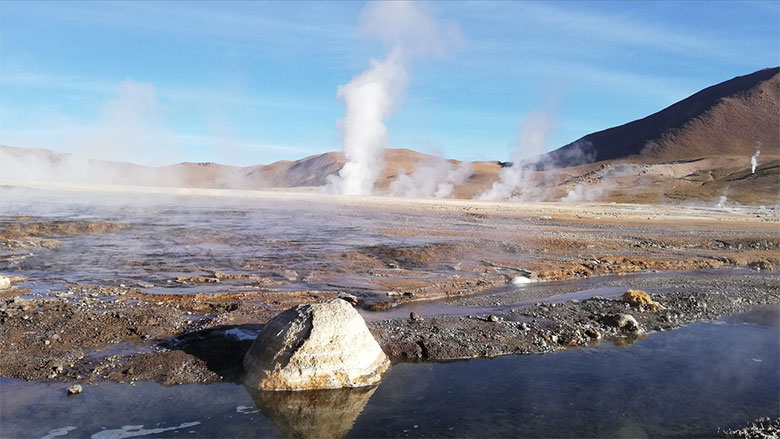 Fumaroles and geysers of El Tatio, a geyser field located in the Andes Mountains of northern Chile, at sunrise.

In northern Chile, 3,600 meters above sea level and almost four hours from the nearest city of Arica, Janet Gómez Mamani tends to livestock on her farm. The Indigenous Aymara woman treats the land she farms as belonging to mother earth, rather than as her own, a belief of the Aymara cosmovision, an ancient belief system.

Beneath the earth, at Gómez Mamani’s feet, there remains untapped geothermal energy resources which could generate continuous clean electricity. Across Latin American and the Caribbean, there is an estimated 11 to 55 GW of geothermal resource potential just for power generation alone. This could play a key role in mitigating the impacts of climate change as droughts increasingly hinder hydropower production in the region, but also to assist in meeting the energy needs of the population.

Nonetheless, there have been various challenges slowing down geothermal development in Chile, one of which was a lack of knowledge about its potential and limited buy-in from Indigenous locals like Gómez Mamani. Misperceptions about the potential impacts were common, and since most areas with geothermal resource potential are in  Indigenous Peoples’ territories, there was a need for early communication with the Government and other stakeholders regarding the development of these natural resources.

For over four years, the World Bank has been assisting the government of Chile through the Technical Assistance for Geothermal Development in Chile Project, financed by a Clean Technology Fund grant. The aim is to improve geothermal energy market conditions by removing barriers to their development, including ones related to regulatory matters and social and environmental aspects. One important subcomponent of this project is stakeholder engagement, raising awareness about the impacts and benefits of geothermal energy development.

Well in advance of the start of the exploration stages of geothermal development, training workshops organized by the Ministry of Energy and University of Chile revealed that there was a lack of knowledge around what geothermal energy really is. A total of more than 400 Indigenous leaders and community members from 6 groups – Aymara, Quechua, Diaguita, Colla, Mapuche, and Pueblos Australes – participated in the 15 workshops.

“We have to advance economically, but it is good to communicate with native peoples because otherwise they [the government] are mistrusted,” says Gómez Mamani.

During consultations, it became apparent many thought geothermal energy was equivalent to large-scale mining, and this misperception was gradually clarified as knowledge was shared. The direct uses of geothermal energy were made more visible, including ways in which geothermal resource development can contribute to community development, improve quality of life, and serve as an alternative to firewood.

Key to engaging and informing citizens like Gómez Mamani were informational materials and visits to geothermal projects. Two technological tours were held with Indigenous leaders, one to Nicaragua, and a second one to the Cerro Pabellón geothermal power plant in Chile.

Gómez Mamani participated to better understand the resource. At the workshop she attended prior to the technological tour, she was presented with brochures about geothermal energy which focused on Indigenous Peoples’ worldview of “the heat of the earth”.

"The earth is alive, it has energy,” she says, knowing now that it is linked with geysers and hot springs.

"We know that lack of knowledge generates mistrust and even more so for geothermal energy, and for this reason early participation by communities in energy project development is vital"
Santiago Vicuña
Head of the participation and community relations division at Chile’s Energy Ministry 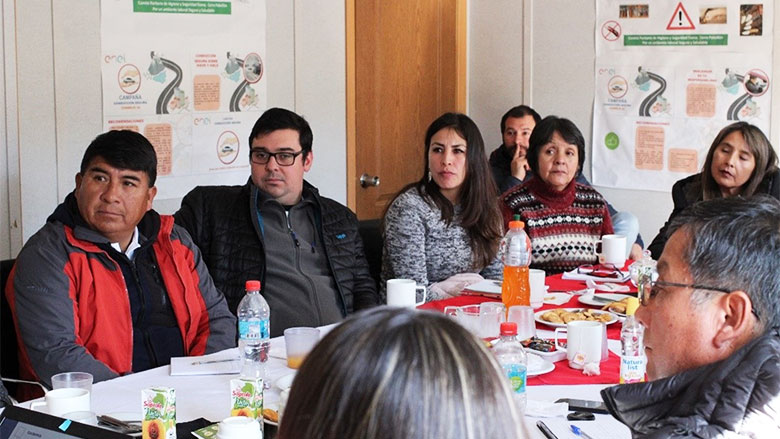 Technical induction talk at base camp.

Participants were able to raise doubts about the use of the energy for power generation, including regarding what impact it might have on water resources. Interest was especially piqued about the benefits that can be derived from direct uses of geothermal, which were viewed positively by communities as an option for reducing gaps in access to energy services.

“We know that lack of knowledge generates mistrust and even more so for geothermal energy, and for this reason early participation by communities in energy project development is vital,” says Santiago Vicuña, head of the participation and community relations division at Chile’s Energy Ministry.

He emphasized that the earlier Indigenous Peoples were consulted, the greater the trust built. “These workshops and tours allowed us to provide knowledge and dispel myths about geothermal energy.”

Rosa Maita Querquezana, another Aymara woman from the province of Parinacota, visited the Cerro Pabellón geothermal plant in northern Chile as president of the community.

“It is important to get to know the projects from these workshops, seeing it, and touching it,” says Maita Querquezana, who was recently a candidate for mayor in her commune. “In this way, you have the opportunity to see the issues related to security and not be guided by transcendental comments.”

The visits showed how electricity production works and its uses for communities like Maita Querquezana’s. It also demonstrated how agreements can be reached with locals and the private companies operating the plants to obtain additional benefits.

For example, the commune of General Lagos, home to 1,400 people, has been waiting for 10 years for daily electricity. Through citizen engagement, stakeholders learned what is involved in getting electricity to their commune and the rules and regulations that need to be overcome to get access, according to Maita Querquezana.

Information is reciprocal and the Ministry understands better now the traditional knowledge of Indigenous leaders. Dialogue must be maintained and institutionalized and moving forward the Ministry plans to replicate these successful early consultations for other renewable energy projects in Chile, including solar and wind projects.

Gómez Mamani embraces the word “respect,” saying the Ministry reciprocated how she and others would want a future geothermal project to proceed. She thinks replicating these experiences with other arms of the Chilean government would provide good results.

“We are people with different beliefs and experiences,” she says. “It has been an innovative and surprising experience. When there is good faith, you can talk.”

While the Technical Assistance for Geothermal Development in Chile Project is limited to providing technical assistance, this support is expected to facilitate greater geothermal development so that Chile can more fully realize the benefits its sizable geothermal power potential (estimated to be 1.3 and 3.8 GW) will bring to the country and its citizens.