Enabling Women to Work and Their Children to Blossom: The Double Success Story of Mobile Childcare in Burkina Faso 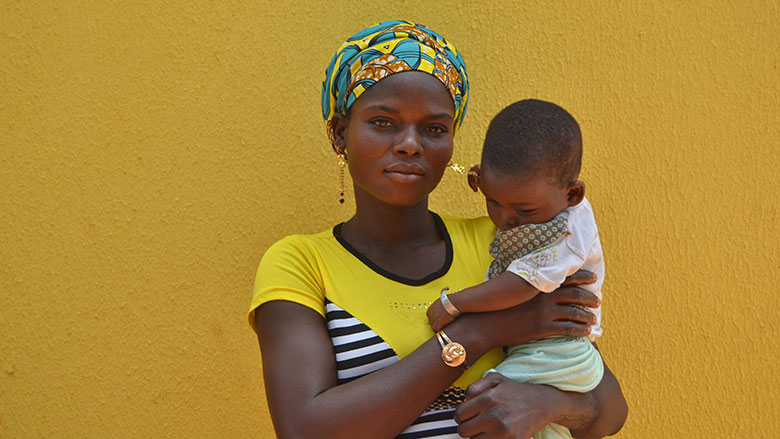 Mamounata is employed at a public works site in Manga, Burkina Faso while her infant son is cared for nearby in a mobile daycare center set up with the help of the World Bank.

MANGA, Burkina Faso, March 8, 2021—Snack time has just ended. Sporting a fine white moustache, several children linger at the table, savoring the last drops of milk in their cups and carefully gathering up the remaining breadcrumbs with their chubby fingers. But most of the kids have already run off to play in the shade of the big acacia tree in the courtyard.Squealing and giggling, some of them spin on the roundabout, while others play catch with a ball or balance like acrobats on tires that have been set into the ground. A small group of girls is having a tea party. The shyest ones are leafing through a book or discovering the joy of mixing bright paint colors on a sheet of paper. A little further on, older children sitting crisscross-applesauce are clapping their hands to the new counting rhyme that a daycare assistant is teaching them while the youngest ones nap.

It’s a typical scene from a daycare center, with one little difference:  This is a revolutionary change for Manga, a town of 28,000 that is a two-hour drive from Ouagadougou. “Knowing that our children are in a safe place gives us peace of mind while we work and reassures our husbands,” explains Minata Dianda, a young mother whose child is in the daycare center. 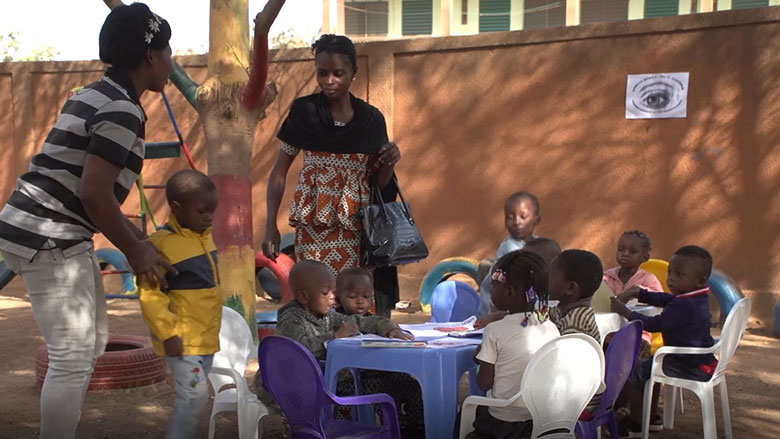 It all began in 2016 when the government decided to launch a temporary job program in the poorest communes of the country as a way of fighting youth unemployment. This is a widespread problem that fuels social tensions in Burkina Faso, one of the world’s poorest countries. 40% of the population lives below the poverty line (US$1.90 a day per person) and escalating conflicts have created an unprecedented humanitarian crisis since 2016.

The aim of the project: offering basic skills training to young people and providing them with a job for six months in public urban development and roadbuilding projects. A lottery system was set up for the selection of candidates. Cleaning out gutters, weeding, tree pruning… the work is varied and very physically demanding.

Even so, more women applied and were, in fact, selected. The problem was that many of them hadn’t dared to say that they were pregnant or had small children in need of childcare because that would have automatically disqualified them.

“It became clear that the women were hiding their children and were making do in whatever way they could to take care of them,” explains Savadogo Ouédraogo, mayor of the third arrondissement of Manga. These makeshift arrangements were far from ideal. Older sisters were often called on to watch over their little siblings, forgoing their own childhood and schooling. “Otherwise, they would be left with a grandmother or a friend, often sitting for hours out in the glaring sun near building sites so that their mothers could come to nurse them and take care of them on their breaks.” These kinds of situations were dangerous for the children and stressful for their mothers. 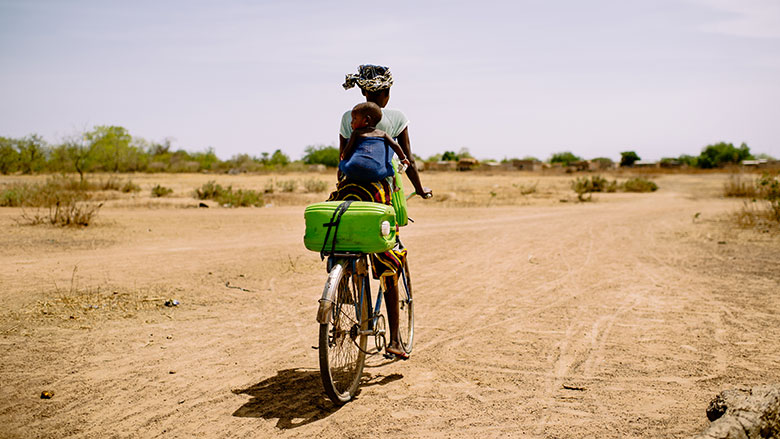 Barry Aliman, 24 years old, rides her bicycle with her baby to collect water for her family, Sorobouly village near Boromo, Burkina Faso. For many women, regular childcare facilities are not an option for many women, given transportation difficulties and limited time available. © Ollivier Girard, CIFOR

This gave the program organizers an idea: “In Burkina Faso, working-age women may have between 5 and 7 children,” says Rebekka Grun, an expert on social issues with the World Bank, which has provided $50 million in funding for the youth employment project through its International Development Association. “”

Since “It takes a village to raise a child,” the project team decided to set up a focus group to look for a way to resolve this problem. They contacted relevant ministries such as education, social affairs and women’s affairs. They also recruited a childhood development expert and sought assistance from partner organizations in order to work more effectively. Most importantly, they invited mothers who were employed on the worksites to tell the team members about their difficulties and needs. That’s when the group came up with the idea of creating mobile childcare units that would address the needs of these temporary workers, who had to move from one worksite to another. A pilot project was then launched in Manga and two other communes.

"Knowing that our children are in a safe place gives us peace of mind while we work and reassures our husbands." 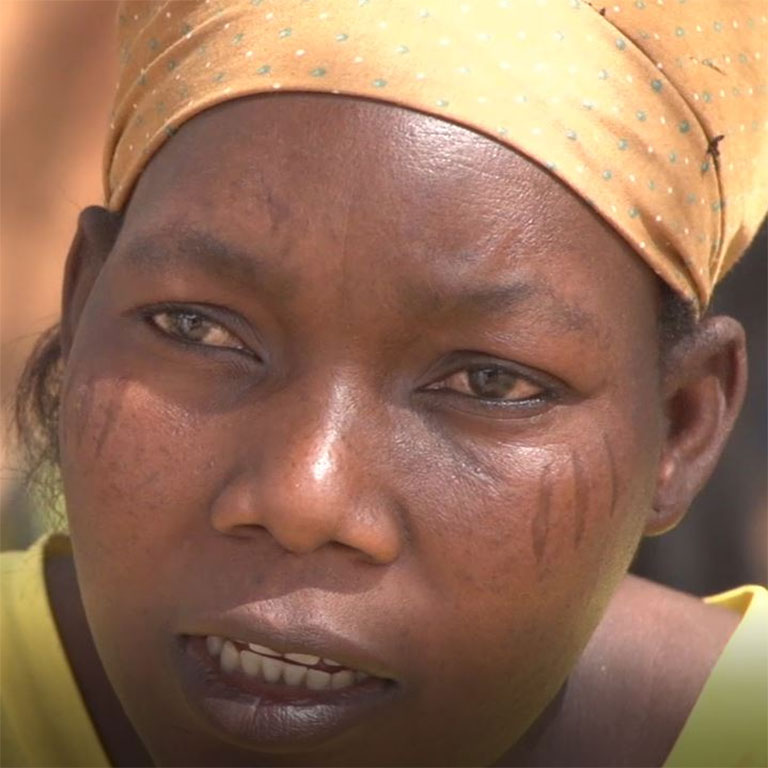 Minata Dianda
A young mother who has benefited from the mobile childcare project in Manga, Burkina Faso.

Playing, singing, interacting, learning to talk, and developing a strong immune system: so many milestones to look out for during the first 1,000 days of a child’s life. According to UNICEF and many scientific studies, infants begin to shape their future in their first years of life. It is therefore crucial to invest early on in their education and health. By organizing these children’s days around play and learning activities developed by specialists, the mobile childcare units contribute to that process and to the development of human capital. The units have also started up a cooperative initiative with the Ministry of Health and local clinics to monitor children’s growth and ensure that they are vaccinated.

The caregivers also provide support to parents by counseling them about hygiene, nutrition and the emotional well-being of their children, thus extending the benefits beyond the time that the children spend in childcare. Pregnant women who are employed at these worksites have been selected to become childcare providers, and the most motivated ones among them have attended a simplified national training course to prepare them to become instructional aides. “This has changed how people think about childcare, which was undervalued and usually unpaid because it was not regarded as involving any actual job skills,” says Savadogo Ouédraogo.

With their minds more at ease, the other women have increased their productivity. They have also managed to save a considerable portion of their wages, and have used this money to start up a business once their contracts come to an end. The production of shea butter or soap, the sale of clothing, the preparation and sale of food, dressmaking, animal husbandry: the list is long. “I was able to save enough money to pay for a hairdressing course where I learned to braid and dye hair, and now I’m planning on opening my own salon,” says Sophie Ilboudo, a 34-year-old mother of three. “I can also help cover household expenses and, thanks to the childcare center, I’ve learned how to take better care of my children.”

The key to success: a simple, inexpensive and replicable idea

Tents provided by UNICEF, a few pieces of furniture, toys, books, some childcare products, all bundled up on a trailer and towed from one site to another by a three-wheeler: the biggest advantage of the mobile childcare units is that they are easy to set up and transport. Following the success of the three pilot projects, Burkina Faso has replicated this initiative in 21 other communes. They were closed at the start of the COVID-19 pandemic but were reopened in October 2020 and now tend to 1,000 children.

“This experience has taught us that, if we want to mount an effective development effort, we need to listen carefully to the people taking part in the program and adopt a more participatory approach. ,” asserts Rebekka Grun. “This is working so well that we plan to make a “how to” video to guide people through the process of setting up a mobile childcare facility.”

Cameroon isn’t waiting around. Impressed by how this initiative is working out, it has successfully organized four mobile childcare centers and plans to set one up on each public works site in the country. Further away, after having piloted the concept, Madagascar intends to launch 278 mobile childcare units, and both Ethiopia and the Democratic Republic of Congo are following suit.