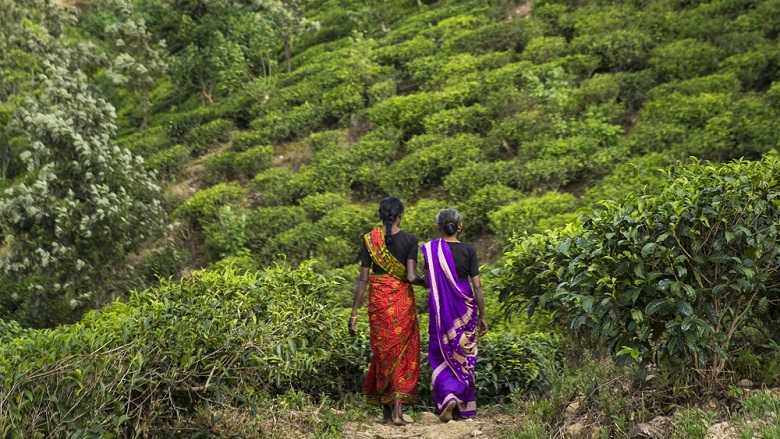 In late 2019, Bunge, one of the world’s largest agricultural producers, took out its first sustainability-linked loan (SLL), following closely behind its competitors, Louis Dreyfus and Wilmar. The interest rate on Bunge’s loan is tied to the company reducing its biodiversity impact and associated risks, namely increasing traceability for its main agricultural commodities and adopting sustainable practices across its wider soybean and palm supply chain. Global SLL volumes increased by 168% over 2018-2019. These instruments have the potential to help drive the transition to a nature-smart economy by offering short-term financial incentives for companies to implement their sustainability strategies. 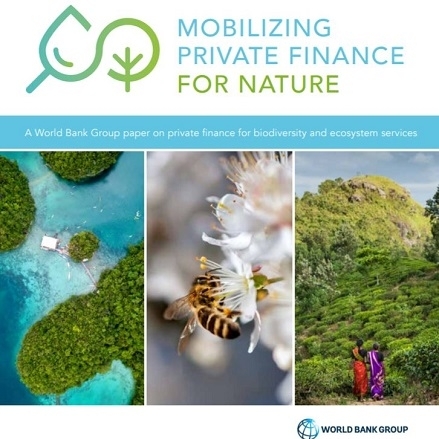 A new World Bank Group (WBG) report ‘Mobilizing Private Finance for Nature’ looks at the current state of play for private finance for biodiversity and ecosystem services. The report argues that the financial sector, has a critical role to play in addressing the global biodiversity crisis, and that governments and regulators hold the key to harnessing the power of the financial sector to mobilize private finance at scale to protect nature.The report highlights a set of “Big 5” ideas for actions that can be taken to better integrate biodiversity risk and opportunities into private sector decisions. These range from environment fiscal reform and better data collection, to broad support of the recently-announced Task Force on Nature-related Financial Disclosures (TNFD). 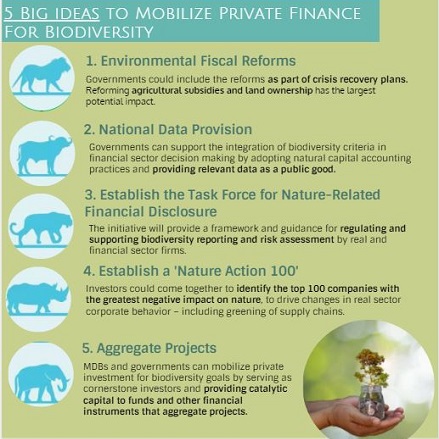 "“The report provides essential guidance on the ‘how to’ of taking private finance to scale. There are several innovative instruments that can help stop runaway biodiversity loss. What is needed is strong political will and coordinated action by the private sector, aided by regulators and governments to bring solutions to scale and ultimately impact economies and the ecosystems they rely on.""
Karin Kemper
Global Director, Environment, Natural resources and Blue Economy at the World Bank

Bunge’s SLL is one of several examples of innovative financing mechanisms companies are using in their efforts to reduce their negative impact on nature. While these instruments demonstrate the increasing attention companies are paying to biodiversity risk, the scale of the biodiversity crisis requires a faster, deeper, and more coordinated response. A recent report from WWF found an average decline of 68 percent in vertebrate species numbers between 1970 and 2016. This is not just an ecological crisis, but also an economic one. According to the World Economic Forum, more than half of global GDP ($44 trillion) is generated in industries that depend moderately to highly on nature and its services. To put it simply, the loss and degradation of biodiversity affects companies’ bottom lines.

There is growing recognition that public funds are insufficient to reverse biodiversity loss. A report recently released by the Paulson Institute shows that the funding gap for biodiversity is $700 billion per year for the next decade. To make matters worse, governments spend about $500 billion per year in economic support that is potentially harmful to biodiversity – five to six times more than the current level of spending on biodiversity protection. A range of perverse economic incentives drive environmental harm over conservation, restoration, and sustainable use of nature. 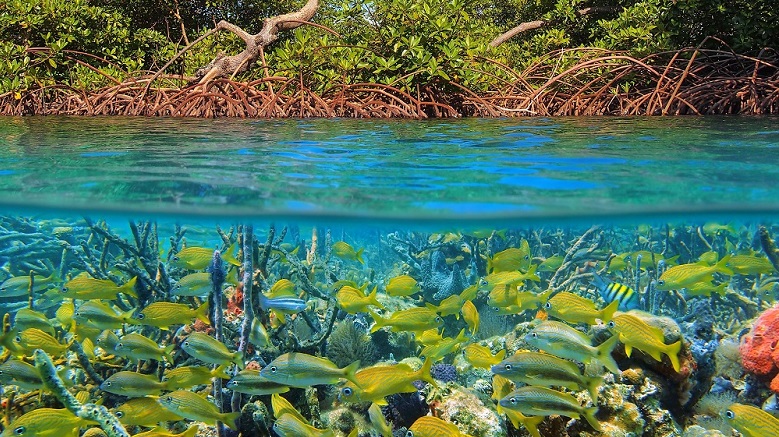 In order to scale up investments in ‘financing green,’ the ability of projects to generate cash flows needs to be improved and track records for new business models need to be established. The report recommends governments support the application of financial instruments which blend commercial and concessional finance and create investment opportunities. One approach to better monetizing cashflows from biodiversity involves ‘stacking’ multiple revenue streams from ecosystem-generated goods and services. For example, some corporations are taking steps to conserve old growth forest in order to sell carbon credits, alongside their traditional logging activities. This approach of ‘stacking’ revenue streams led the Alaska-based Sealaska corporation to realize its most profitable year yet in 2018, while also conserving a large swath of its forest for its Native shareholders to fish, hunt, trap, and forage.

For the second approach, ‘greening finance,’ the financial sector has a critical role to play in driving the transition to improved biodiversity risk management. Some financial institutions are leading by example, as illustrated by the deployment of SLLs. But regulators, supervisors, and standard setters can encourage these initiatives, by expanding the scope of environmental risks they manage to include biodiversity risk. The Dutch Central Bank (DNB) is playing a key role in advancing this agenda. In its recent report ‘Indebted to Nature,’ DNB advocates for oversight of the management of biodiversity risks. The report represents the first attempt to quantify the potential value of biodiversity loss to a country’s financial sector. The French government is also leading on regulatory changes and has a law[1] which will come into effect in 2021 that requires companies to disclose biodiversity risk.

“Biodiversity loss presents us with an unhedgeable risk of unimaginable size and impact. But ‘unhedgeable’ doesn’t mean that there’s nothing the financial sector can do about it. Rather, it means we need to do the hard work to understand the threat presented to our clients’ investments, as well as the threat our investment decisions, and our portfolio holdings, may be presenting to biodiversity. We need to engage with companies in our portfolios, and with policymakers, with an increasing sense of urgency. It is not too late to act, but time is very short,” said Adam Kanzer, Head of Stewardship, Americas, BNP Paribas Asset Management

There are some actions that help advance both categories of investments. A key example is the reform of agricultural subsidies which, by shifting from incentivizing harmful production practices to techniques supporting conservation, can significantly contribute to both improving environmental outcomes and reducing the biodiversity risk associated with a company’s practices. Such policies have the potential to improve the potential cashflows associated with biodiversity projects, promote sustainable use, and drive better risk management practices.

“Investors are increasingly focused on financing activities and companies that preserve, protect and enhance nature over the long-term, and create positive biodiversity outcomes. At IFC, we are excited by these emerging investment opportunities in nature-based solutions,” said Alzbeta Klein, Director and Global Head of climate business, IFC.

COVID – a stark reminder of the urgency to act

The COVID-19 pandemic is a stark reminder that planetary health and human health are interconnected and that economies can only thrive on a healthy planet. Stimulus packages currently being crafted can demonstrate how short-term job creation can be pursued alongside long-term goals, including the protection of biodiversity and ecosystem services. For example, Pakistan’s 10 Billion Tree Tsunami Program, a national reforestation effort, is the largest public safety net program to be implemented during the current downturn. The program has created more than 63,600 jobs, many of which are in rural areas and focus on hiring women and youth.

Biodiversity finance can build on lessons from climate change

The paper highlights biodiversity as the new frontier for financial markets and estimates that biodiversity finance is five years behind climate finance. Biodiversity finance can learn from the actions taken to scale up climate investments, including the importance of blended finance and the disclosure of physical and transition risks. Yet biodiversity finance has important differences from climate, requiring a greater emphasis on risk mitigation and management in the private sector.

Biodiversity does not yet have an apex target, like 1.5 degree C, to organize investment and policies around. However, the upcoming Conference of the Parties of the Convention on Biological Diversity (CBD) provides an opportunity to set a goal and that can help shift how the world produces food, builds infrastructure, and mitigates climate change. The new post-2020 global biodiversity framework to be adopted at the COP is also an opportunity for governments to engage the private sector in a new way.

The WBG is committed to helping to bridge the biodiversity financing gap by bringing governments and the private sector together to fund the necessary investments to reverse global biodiversity loss. Ongoing research will point to specific policy actions that can be taken to advance the transition to the nature-smart economy.

[1] Article 173 of the Energy Transition Law 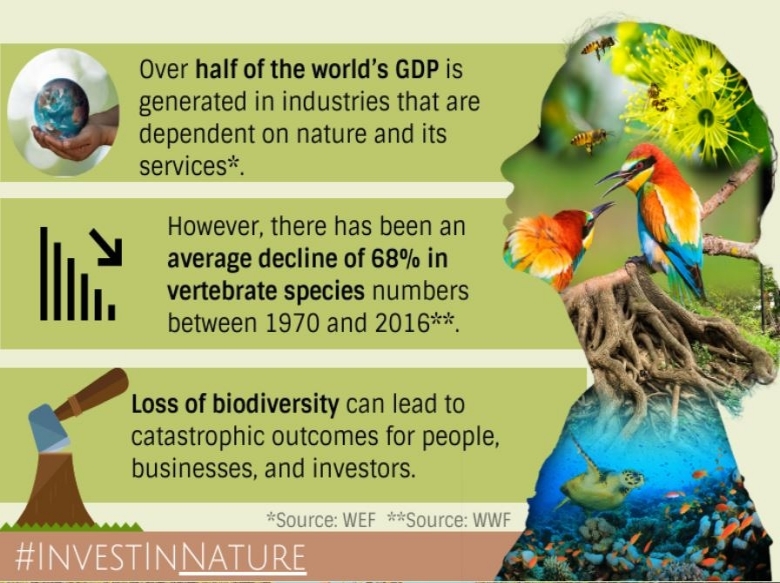