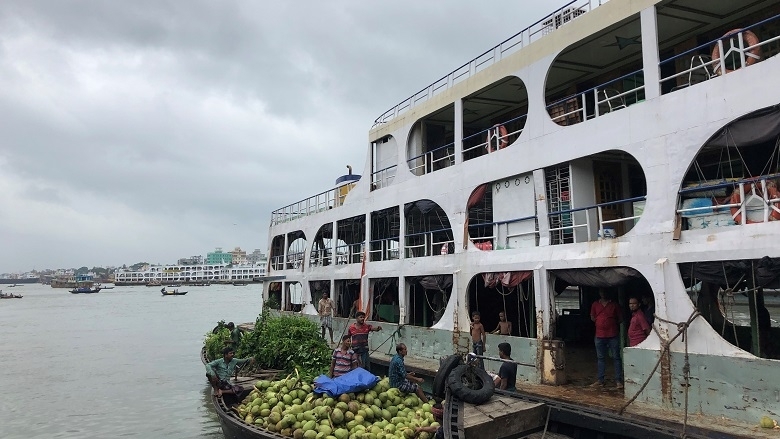 Bangladeshis live on the front lines of climate change. Over 28% percent of people reside in coastal areas which boast highly fertile alluvial soil and some of the best farmland in the country. Rising sea levels, cyclones and other climate-induced disasters, however, are displacing people, destroying harvests, livelihoods and infrastructure in the country. The melting of Himalayan glaciers due to rising global temperatures further compounds the problem for Bangladesh, which is located on the floodplains of major transboundary rivers.

At the same time, In this spirit, Bangladesh is integrating climate considerations into its national development planning.

The country is a member of the NDC Partnership and has worked with the NDC Support Facility to develop a low-carbon strategy for the country’s inland waterway transport sector as well as prepare a greenhouse (GHG) inventory and a monitoring, reporting, and verification system to support a low carbon and resilient transition. Key among this is a pilot exercise shifting some of Bangladesh’s cargo transport along the Dhaka-Chittagong corridor to inland waterways which brings a unique addition to the NDC dialogue in country as previously, the role of inland waterways in Bangladesh’s transport sector, was absent from these discussions.

Not only is Bangladesh’s road transport sector the backbone of its export-driven economy, a growing source of national emissions but this corridor accounts for 60% of the country’s commercial traffic. Furthermore, congestion on the highway and political disturbances often cause significant delays in the transport of goods to and from the Chittagong port, one of the busiest international seaports in the Bay of Bengal, and air pollution has also been a growing public health concern. A transition to greener, more resilient and more efficient modes of logistics and transport infrastructure – including the existing IWT route connecting Dhaka to Chittagong -- is crucial to boosting Bangladesh’s export-led growth and prosperity in the longer term. The modal shift envisaged by the pilot would not only reduce the emissions of Bangladesh’s transport sector in line with its NDC, but also lower transaction costs for suppliers and improve the reliability and efficiency of freight transport in the country.

A first-of-its-kind joint working group was created to promote inclusive planning and decision-making, bringing together stakeholders from the public and private sectors. Members are derived from the Ministry of Environment, the Ministry and Department of Shipping, inland waterway and port authorities, customs and shipping companies and both national and multinational companies involved in Bangladesh’s garment sector. The broad coalition was vital given the complexity and the multi-sectoral effort required to boost the competitiveness of the inland waterway transport sector which boasts a network extending 24,000 kilometers.

The group identified key barriers and low-carbon solutions for improving the inland waterways transport sector. Proposed solutions include guaranteeing payments to barge service providers; providing short-term subsidies to shippers to equalize the costs of using inland waterways instead of roads; and addressing last mile connectivity constraints and warehousing space. As a follow-on activity from the project, the government is undertaking a modal shift pilot for the Dhaka-Chittagong corridor, with support from the World Bank’s Bangladesh Regional Waterway Transport Project.

A GHG inventory along with monitoring, reporting and verification tools have helped create a knowledge base for government agencies to effectively measure, monitor and report on GHG emissions in the inland waterways transport sector. This effort is paving the way for evidence-based low carbon policies and investments. The assessment of mitigation measures for the sector using marginal abatement cost curves have enabled policymakers to identify measures and scenarios that would have the highest impact in lowering GHG emissions on a sustainable basis. Through measures such as the use of more efficient vessels, alternative fuels, auxiliary power and trip efficiency, the sector could reduce emissions by between 4% and 10% annually by 2030. Armed with data tools and expert recommendations, Bangladeshi government officials and policymakers are in a better position to more closely align the country’s transport policy strategy and business planning with the country’s NDC targets. There has also been growing interest among inland waterway authorities and private companies to put in place measures to enhance the resilience of ports, vessels and in-land waterway infrastructure.

Best practices that emerge from its experience of scaling up the use of inland waterways for cargo transport are applicable to other countries in the region with coastal access such as India, as well as landlocked ones including Nepal and Bhutan which host Himalayan rivers.

Leanne Farrell is a Senior Environmental Specialist at the World Bank. She can be reached at lfarrell@worldbank.org

Xi Hei Chiu is a Transport Specialist at the World Bank. She can be reached at hchiu@worldbank.org

Erik Nora is a Senior Operations Officer at the World Bank. He can be reached at enora@worldbank.org

Rajesh Rohatgi, a Senior Transport Specialist, is the Task Team Leader of the Bangladesh Regional Waterway Transport Project. He can be reached at rrohatgi@worldbank.org