A Shift Among Bangladesh’s Power Planners 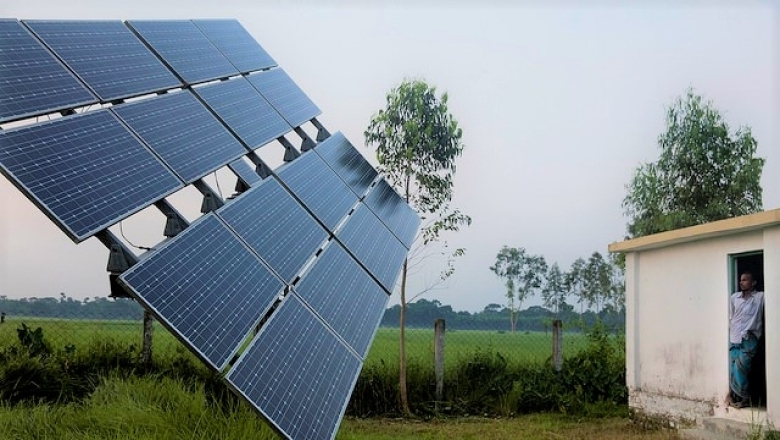 Manik, a solar pump operator for an NGO working to bring solar irrigation to farmers and solar home systems, works near solar panels in Rohertek, Bangladesh.

It is opting for low-carbon and climate resilient development, diversifying its energy mix which has been reliant on on-shore natural gas that helped the country rapidly expand electricity access over the decades.

Renewable energy has made promising inroads into the country. Solar panels dot rooftops and tracts of land, delivering clean power to homes, businesses and communities. Wind power plants are being planned in coastal areas and utility scale solar is coming online elsewhere. Bangladesh’s Nationally Determined Contribution (NDC) speaks of producing 10% of its electricity from renewable sources by 2020, a target the country aspires to achieve, in part, by developing a 400-megawatt wind power generation capacity and adding 1000 megawatts of utility-scale solar capacity by 2030.

A member of the NDC Partnership, Bangladesh is committed to achieving universal access to affordable and clean electricity. The World Bank Group, an implementing partner of the Partnership, supports Bangladesh in this endeavor. Its NDC Support Facility is helping the country address barriers to lowering the carbon footprint of its power sector—which currently accounts for over 40% of national GHG emissions.

The Bangladesh Power Development Board (BPDB) – the national body that oversees power sector planning and owns significant generation capacity – has addressed the surge in power demand that has accompanied strong economic growth over the past decade by skillfully developing power system master plans. The BPDP updated its power system master plan [2017 – 2030] without external support, after receiving capacity building trainings and tools from a project funded by the World Bank’s NDC Support Facility.

The “Implementing Renewable Energy Targets in Bangladesh” project trained power experts using planning techniques focused on building renewable energy capacity. The trainings helped develop planning capacity using the World Bank’s Electricity Planning Model (EPM), which was tailored to Bangladesh’s power planning needs. In what was a first for the country, the project also produced a comprehensive paper on the integration of variable renewable energy into Bangladesh’s power generation mix. This provided a sound basis for BPDP and the Power Grid Corporation of Bangladesh (PGCB) to plan the integration of variable renewable energy, by considering Bangladesh’s inadequate spinning reserves. As per the project’s analysis, Bangladesh’s renewable energy target under the current NDC can be achieved at a relatively modest cost by augmenting the power supply through a combination of renewable energy, and regional interconnection and off-shore gas exploration. Such an approach significantly limits coal-based generation and generates cost savings for the Bangladeshi government.

Bangladesh’s power planners now have the tools and expertise to independently conduct technical studies for planning investments in grid stability and storage technologies-- key considerations for scaling up renewable energy deployment. Additionally, the creation of a joint planning committee comprising of power generation and transmission experts under the project’s initiative, has enhanced coordination for building a resilient and greener power grid.

The project financed by the NDC Support Facility has ended but has set the stage for follow-on activities that reinforce Bangladesh’s climate ambitions. “The project has not only supported Bangladeshi planners in their aspirations to accelerate renewable energy deployment, but it has also spawned interest in the areas of energy efficiency and demand response”, says Debabrata Chattopadhyay, the Project Team Leader. The project has provided valuable inputs to the World Bank Group’s initiatives on sustainable energy access in Bangladesh and in the South Asia region. The findings of its power transmission analysis have been valuable to the Bangladesh Scaling Renewable Energy Project’s work on a utility-scale solar PV park in the country’s Feni district and for the World Bank’s program on the development of a South Asian regional electricity market.

, which face similar power planning capacity constraints and barriers to scaling up renewable energy. Another project funded by the NDC Support Facility on developing lowcarbon waterway transport in Bangladesh also underscores the country’s commitment to climate-smart development. The Facility’s experience in Bangladesh shows that other developing countries can also work towards greening their electricity grids and economies with a paradigm shift and the right toolkits.

The Project Team Leader, Mr. Debabrata Chattopadhyay, is a Senior Energy Specialist at the World Bank. He can be reached at dchattopadhyay@worldbank.org.