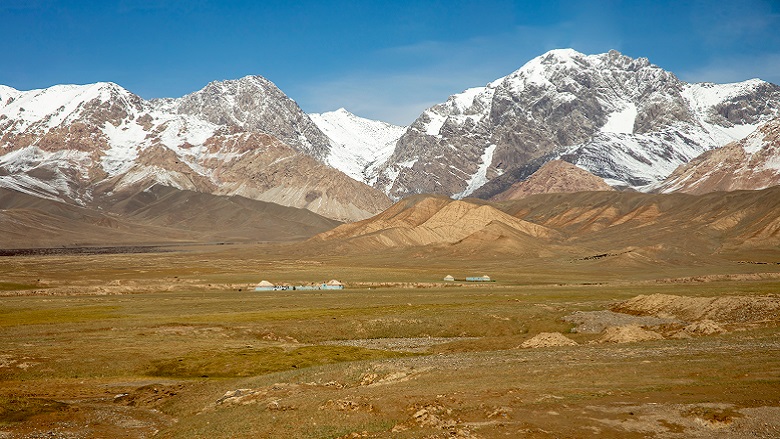 Many of Central Asia’s major rivers flow through the Kyrgyz Republic, making the country a critical source of freshwater for its population and that of several neighboring countries. However, glaciers in the predominantly mountainous country are shrinking due to climate change which, in turn, adversely affects water, food and energy security across the region.

With a 19% poverty rate (measured at below US$3.2 per day, 2011 PPP terms), the country’s mountainous populations are already experiencing droughts, erratic rainfall, soil erosion and degradation.

The Kyrgyz Republic, a member of the NDC Partnership, is launching a robust response to climate change putting the country on a path to lower carbon and climate resilient development. The country is one of the world’s lowest contributors to greenhouse gas (GHG) emissions. Its energy and agriculture sectors, however, are the top two drivers of national emissions at 55% and 34% respectively.

The country’s nationally determined contribution (NDC) pledged to reduce GHG emissions in the range of 11.49%-13.75% below business as usual (BAU) levels by 2030, rising to between 29% and 30.89% with international support. It also prioritizes building the resilience of priority sectors such as water, energy, forestry, biodiversity and agriculture.

With the help of the World Bank’s NDC Support Facility, the country has developed a Monitoring, Reporting and Verification (MRV) system to track progress on NDC actions and financial flows in the forestry and biodiversity sectors. The country also strengthened its national GHG inventory, which tracks emissions from a variety of sectors.

The MRV system has generated data that has boosted collaboration between policy makers and shared decision making for policymaking across ministries. It has helped establish a baseline to identify and report on trends in GHG emissions levels, the impacts and costs of climate actions, as well as the use of international and domestic climate finance.

The updated GHG inventory provides granular data to assess the impacts of low carbon measures in different areas in the country and is in full compliance with the UNFCCC MRV framework.

Previously, data generated by ministries was not available in a format that could be shared and used to inform policymaking. Today’s MRV system, developed with cross-sectoral participation, is fully customized to the needs of the forestry and biodiversity sectors. Thirty one percent of the population of the Kyrgyz Republic lives nears forests and relies on forest resources for their livelihoods.

Integrated data can ensure that responses and policies are more targeted in key sectors such as agriculture, forestry and land use, and can boost development outcomes and improve lives and livelihoods. The project has also laid the foundation for future support to MRV across various sectors under the NDC Partnership Plan.

Training government officials on GHG inventory tools has enhanced access to quality data and built a wide network of stakeholders that are mainstreaming climate considerations - including understanding specific climate vulnerabilities and the emissions reduction potential of priority sectors - into the Kyrgyz Republic’s development planning.

Government officials are now well versed in preparing the annual inventory and have sufficient expertise for collecting and managing quality data in line with the newest reporting standards and requirements.

The Kyrgyz Republic is now better equipped to fulfill its reporting requirements to the UNFCCC, under the Paris Agreement, including submission of its National Communication and Biennial Update Reports.

These submissions inform the Paris Agreement’s goals for countries to raise their ambition over time, building trust and confidence in global collective action towards achieving net zero emissions by 2050 and climate neutrality thereafter.

The MRV system and GHG inventory have also helped demonstrate the Kyrgyz Republic’s commitment to climate action, strengthening trust among donors and investors. For instance, the ongoing work has demonstrated the need to expand further into sectors including climate-resilient land, forestry and sustainable tourism, and has helped catalyze funding for natural capital accounting in these sectors from WAVES, a World-Bank led global partnership  that aims to promote sustainable development by ensuring that natural resources are mainstreamed in development planning and national economic accounts (the Partnership is funded by the European Commission, Denmark, France, Germany, Japan, the Netherlands, Norway, Switzerland, and the United Kingdom.)

Gillian Ann Cerbu is a Natural Resources Management Specialist at the World Bank. She can be reached at gcerbu@worldbank.org

Philippe Ambrosi is a Senior Environmental Economist at the World Bank. He can be reached at pambrosi@worldbank.org