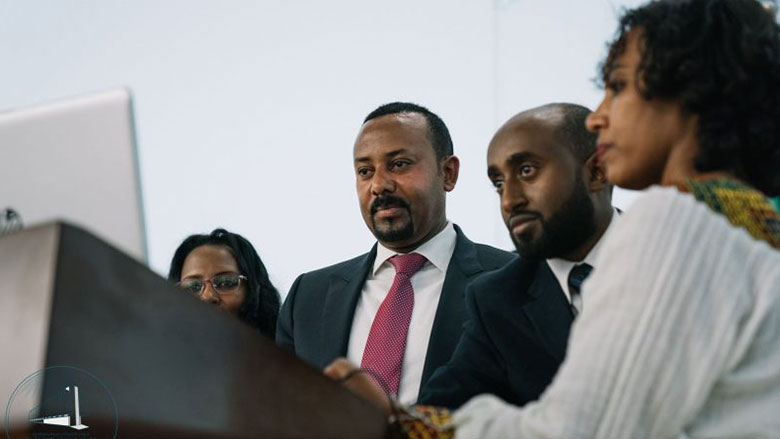 Ethiopia Prime Minister Abiy Ahmed (middle) at the launch of the new electronic single window, which automates trade procedures and reduces the need for physical, manual and duplicate processes.

Maintaining trade flows during the COVID-19 (coronavirus) pandemic is crucial in providing access to essential food and medical items and in limiting negative impacts on jobs and poverty. For Ethiopia — Sub-Saharan Africa's fifth largest economy and second most populous nation with more than 100 million people – mitigating pandemic-related trade risks is essential. The country’s recently launched electronic single window will help facilitate trade in times of crisis, like COVID-19. The new online platform automates trade procedures and replaces the need for physical, manual and duplicate processes. It also plays a key role in enhancing transparency for trade, which is important for easing the movement of critical supplies during the pandemic.

ADDIS ABABA, April 23, 2020 – Prior to the pandemic, Ethiopia had experienced steady economic growth over recent years. Foreign direct investment has increased from $278 million in 2012 to more than $3.3 billion in 2018. Despite this progress, the country's competitiveness continues to be constrained by high trade costs that deter investment by both local and international businesses from operating in Ethiopia.

Burdensome documentary requirements, high levels of physical inspection of imports, lack of coordination among border agencies coupled with low levels of automation and an uncompetitive trade logistics sector raise the costs of doing business and limit opportunities to trade.

“Manual procedures required frequent face-to-face interaction with regulatory agencies,” said Henok Eneyew Wassie, import and export manager at Belayneh Kinde, one of the largest import and export firms in Ethiopia. “Many actors were involved in the clearance process, but there was little coordination among them. This resulted in severe trade delays.”

Ethiopia has among the highest logistics costs in the world, – which retard growth of export-driven light manufacturing and agriculture. High trade costs can be attributed to various constraints, including a state monopoly on key logistics services, regulatory restrictions and low levels of key logistics services, shortages of foreign currency which prolongs import times, and delays in obtaining and processing trade documents.

To address these challenges, the government, - through its Homegrown Economic Reform Agenda,  is pursuing a multi-pronged approach that includes improving regulations, processes, and practices that were burdensome to private businesses and addressing investment climate issues that have been holding back investment and productivity growth.

As part of the government’s commitment to improve investment and trade, the Ethiopian Customs Commission developed an electronic single window (eSW) for trade with help from the World Bank Group. The new eSW system connects the 16 major cross-border regulatory agencies. It enables traders to submit documentation and receive electronic permits relating to import and export through a single window submission, significantly reducing the time and cost to trade.

“By creating a paperless environment, eliminating multiple physical inspections and repetitive document submissions, it will reduce clearance times for traders from 44 to 13 days,” Prime Minister Abiy Ahmed told the Ethiopian Mirror earlier this year. “It will also help to reduce compliance costs for traders by an estimated 50%.”

At the onset of the project, the Bank Group assisted the government to build a blueprint for the eSW (business process reviews, functional and technical architecture, etc.), but also catalyzed stakeholder consensus for reform.

As changes in the legal and regulatory framework introduced new procedures and approaches to the conduct of customs operations, the Bank Group was instrumental in providing training and workshops for customs officers, other relevant boarder agencies, and the private sector to ensure the effective implementation of the reforms.

A second phase of the project – currently underway – will connect more regulatory agencies to the eSW and is expected to further reduce trade times from 13 to just three days.

Early results are already being voiced by the private sector. “The new eSW system has eliminated the need to physically apply and get permits for each export shipment from the Ministry of Trade,” said Muluken Mihret, documentation officer at Belayneh Kinde. “This not only has saved us time, but also reduced our transport costs to and from the Ministry office.”

“We have processed over 20 exports of sesame seeds using the new eSW system,” said Ato Asmamaw Melaku, documentation officer at Abat Import and Export Plc. “We used the system to submit applications and get permits from the Ministry of Trade. The system is friendly, easy to use and reduced the time required to process the export permit from the regulatory agency,”

The eSW brings Ethiopia closer to international trade standards, such as the World Trade Organization Trade Facilitation Agreement (WTO TFA). While Ethiopia is not a member of the WTO, the government requested assistance from the Bank Group to support improvements in Ethiopia’s trade facilitation procedures, in line with the WTO TFA.

Trade facilitation can also enhance the competitiveness of Ethiopian products by streamlining customs clearance and logistics procedures for importers, exporters and manufacturers, which in turn reduces trading costs and time of inputs for producers and final products for consumers.

Support for the electronic single window in Ethiopia was provided by the World Bank Group with funding from the Trade Facilitation Support Program (TFSP).  The TFSP is funded by nine donor partners: Australia, Canada, the European Commission, the Netherlands, Norway, Sweden, Switzerland, the United States, and the United Kingdom. This initiative—implemented by IFC and the World Bank—provides assistance to countries seeking to align their trade practices with the World Trade Organization Trade Facilitation Agreement (WTO TFA).

IFC’s Ethiopia Investment Climate: Trade Facilitation I & II Projects - funded by the governments of Sweden, Netherlands, and the United Kingdom - aim to promote private sector development and improve the investment climate in Ethiopia.