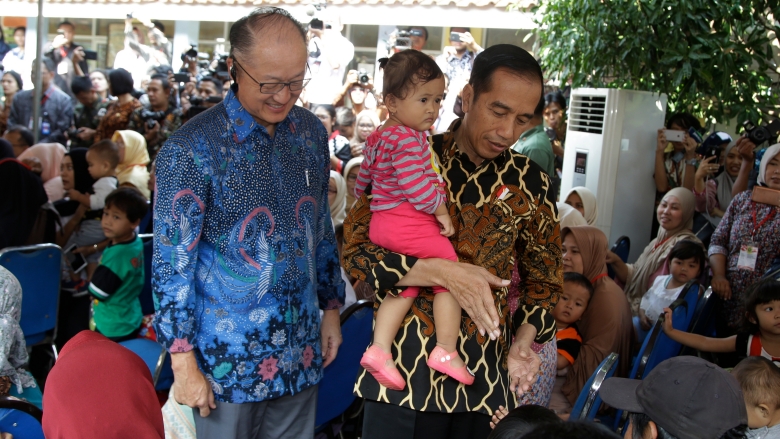 Indonesia’s new National Strategy to Accelerate Stunting Prevention will ensure that all households with pregnant women or children under age two can access the complete package of services essential to prevent stunting. Under the leadership of the highest level of government, the program employs a ‘whole of government approach’ involving coordination among 22 ministries and alignment across levels of government.

For years, Indonesia has invested substantially in nutrition for mothers and young children. But child stunting—marked by low height for age, a red flag indicator that points to a range of deficits—has remained stubbornly high at 30.8 percent (2018), with worrying implications for human capital.

Inspired by Peru’s success in reducing stunting in a short period of time, the Government of Indonesia is moving swiftly to ensure that future spending delivers results. Its new National Strategy to Accelerate Stunting Prevention will ensure that all “1000-day households”—those with pregnant women or children under age two—can access the complete package of services essential to prevent stunting.

Indonesia is part of the Human Capital Project, a network of 39 countries working on accelerated human capital development plans. The Investing in Nutrition and Early Years (INEY) Program, which supports the Indonesian government in implementing its ambitious National Strategy, embodies the guiding principles these countries are using to transform human capital outcomes and raise future productivity.

A “whole of government” approach

Traditionally—and not just in Indonesia—stunting has been primarily a health sector issue. But there is now broad recognition that it is a multisectoral issue requiring strong leadership. President Joko Widodo champions the agenda, while Vice President Jusuf Kalla chairs a minister-level committee that serves as a coordination mechanism to hold ministers and sectors accountable for specific and timebound actions.

The National Strategy involves coordination among 22 ministries that play a role in ensuring that every village and every households gets access to a core package of services proven to be key in reducing stunting in Indonesia. These include the Ministries of Health, Public Works (for water and sanitation), Education (early childhood development), Social Affairs (social protection programs), Agriculture (food supply), Communication (behavior change), as well as the Ministry of Home Affairs and Ministry of Villages (decentralized service delivery at the district and village levels).

It also involves alignment across many layers of government, as Indonesia is a highly decentralized country with 75,000 villages playing an important role in the delivery of stunting reduction services at the frontline. And delivering the program at scale in Indonesia means reaching 24 million 1000-day households—across 6,000 islands.

The Ministry of Finance is taking a keen interest, just as in Peru. It is committed to ensuring that the $3.9 billion per year program reaches its goals. World Bank Group support of $400 million for the INEY Program follows a results-oriented model, with money being disbursed when targets are reached. The $400 million program leverages improved government spending of $6.6 billion over four years.

The program has within the first few months organized an initial stunting summit with the first 100 priority districts, and signed the first set of MoUs with them to accelerate stunting prevention and carry a list of actions to ensure that the work of many sectors converges towards the same goal. In 2019, the government will scale up to 160 districts, aiming to reach all districts by 2022.

Aligning sectors towards a single goal

Why is this important? A look at the data for service delivery in Indonesia shows that each separate intervention (for example, access to safe water and sanitation, or early childhood development services) has reasonable rates of coverage. The reason stunting has remained high is because millions of 1000-day households are missing out on the complete package of interventions that will move the needle.

This requires much better planning and budgeting at the district level, so that interventions are not delivered in silos but in a more coordinated way. But first, what is needed is to find out what is missing for each household. This is not easy, because stunting is not concentrated in just a few districts in Indonesia. In fact, it is spread across the country, making identification of priority households a key task.

"Health is a collective responsibility and therefore budget management is critical, whether it is the budget of the central government, the district government or the village government – all levels of government must prioritize spending on stunting prevention. " 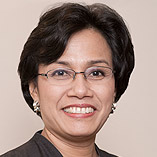 Indonesia’s “Human Development Workers” play a pivotal role on both the supply and demand side of service delivery. On the supply side, they identify service gaps related to malnutrition, establish targets for service providers in addressing the gaps, and monitor results and implementation of key human development interventions at the facility and household levels.

On the demand side, they work with the Government’s Program Keluarga Harapan (PKH) to ensure vulnerable households are incentivized through conditional cash transfers to utilize key nutrition and early childhood education services. The PKH program will also include family development sessions delivering behavioral change communication on nutrition, early childhood stimulation and sanitation.

Human Development Workers are carrying out a massive social mapping exercise. They are identifying 1000-day households across the country, mapping their access to key interventions, and writing up diagnostics that help village and districts administrators understand what needs to be done and priority budget allocations for increase their access to the priority nutrition interventions.

These workers also monitor implementation every month and organize village meetings once a quarter to update people on progress and help villages prepare progress reports. Citizen engagement is vital to succeed, as villages receive fiscal transfers to take actions that potentially reduce stunting.

Innovation and research as the program scales up

A program of this scale and ambition inevitably needs an evidence-based approach to course correction and good implementation support. Financing from Australia’s Department of Foreign Affairs and Trade and the Global Financing Facility—which supports maternal, newborn, child and adolescent health—is supporting catalytic investments in future capacity building, innovation and research and a laboratory of learning to be scaled up in the national program.

For example, the World Bank is working with the Ministry of Villages to design and test new app-based technologies to help HDWs track tasks, record monitoring data and easily generate reports. This will be tested in the field in early 2019 and is expected to be particularly efficient and cost-saving because it tracks all the necessary data simultaneously in real time—invaluable for district officials trying to identify gaps and direct support in the right direction.

The World Bank is also working with the Office of the Vice President and the National Planning Agency in Indonesia to put in a place a mixed-methods evaluation strategy.  This includes measuring stunting every year to accelerate learning and identifying best practices across the country. It also includes investing in nudge experiments to understand how best to design interventions that change behaviors such as early initiation of breastfeeding and healthy diets.  Indeed, the program was designed based on extensive global research, and may become an example for other countries in the years to come.