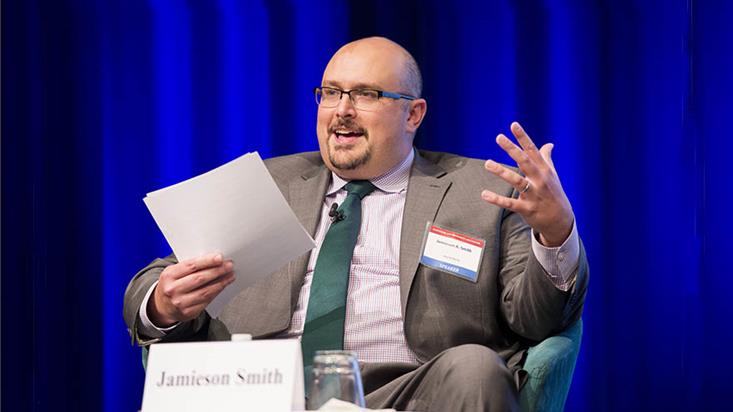 Our staff should care about promoting integrity and identifying instances of corruption because this will help their projects achieve their intended objectives and truly meet our clients' needs.

​​Fraud and corruption—these words often inspire feelings of indignation and frustration in World Bank Group (WBG) staff.  Fraud and corruption in our projects divert our institution's funds and our staff's efforts into waste instead of fully mobilizing these resources into helping our clients solve their greatest developmental challenges. WBG projects fund over 30,000 contracts annually with firms and individuals from all over the world, so it might not be surprising that concerns with fraud and corruption sometimes come up regarding WBG projects. Some staff remain cynical about the prospects of stamping out corruption in our projects, while others are optimistic. Among our most optimistic staff is Jamieson Smith, the World Bank's Chief Suspension and Debarment Officer (SDO). In April 2018, Jamieson was appointed to lead the Office of Suspension and Debarment (OSD), which provides the first level of adjudication in the WBG's sanctions system.

Q:  Jamie, what is your background and what attracted you to this work?

I came to the WBG in March 2010 specifically because of the impactful work the institution was doing in the anti-corruption space.  Before that, I worked in white-collar criminal defense at a couple of large law firms in Washington, D.C. where I concentrated on conducting internal investigations and implementing compliance programs for corporate clients that had been accused of paying bribes overseas. As part of my job, I had the chance to visit many countries around the world and I really enjoyed both the anti-corruption work and the international aspect of it. These travels also increased my awareness of how badly corruption can harm societies, which spurred me to look for a job where I could do more to stamp out corruption at the source. So when an opportunity arose to work with the WBG, I was very excited to join the impressive team working in the sanctions system. Eight years into my career at OSD, I could not be happier that I left law firm life and joined the WBG—it is such an interesting and fulfilling place to work and every week I meet amazing people from around the world who all bring such different perspectives and talents.

Q:  Why do integrity and anti-corruption efforts matter and why should WBG staff care about promoting this?

It comes down to developmental effectiveness. It has been long-established that corruption directly undermines the WBG's efforts to reduce poverty and help boost shared prosperity. Regardless of the country or sector where our staff work hard to address crucial development challenges, corruption can distort decision-making, create uncertainty and deepen inequality. Our staff should care about promoting integrity and identifying instances of corruption because this will help their projects achieve their intended objectives and truly meet our clients' needs.

Q:  Many of our staff may not know all that the Bank is doing to fight fraud and corruption. What is the WBG's sanctions system and what is your office's role?

In 1996, then-President Wolfensohn acknowledged that corruption is a development issue in a speech now known as the "Cancer of Corruption" speech. This prompted the WBG to establish a formal mechanism to sanction companies and individuals that engaged in fraud and corruption in WBG-financed projects. Over time, the early sanctions structure has evolved into a robust two-tiered sanctions system that is now a key component of the WBG's institution-wide anti-corruption efforts. How does it work? The Integrity Vice-Presidency (INT) investigates misconduct allegations (which can range from a simple forged C.V. to a complex scheme involving bribes paid on multiple contracts) and if it finds evidence to conclude that the alleged misconduct occurred, it submits a case and all the supporting evidence to my office for review. My job as SDO is to independently assess whether there is sufficient evidence to sanction the accused party. If the evidence shows that the company more likely than not engaged in the misconduct, my office will send the case to the company and recommend an appropriate sanction, which is usually a period of debarment during which the sanctioned company is ineligible for WBG-financed contracts. The company may contest my determination to the WBG Group Sanctions Board, which will consider the case anew and make a final decision. Approximately one-third of companies appeal; the other two-thirds accept my determination.

Q:   Do you think it is an effective system? If yes, why?

Yes, I absolutely think it is an effective system, mostly because it brings concrete and immediate results. Since our two-tiered system was set up in 2007, nearly 600 individuals and companies have been sanctioned. I should mention that the list of sanctioned entities is publicly available, which enhances the general deterrence effect of the sanctions system. Importantly, since 2011, the WBG cross-debars with four other major multilateral development banks. This sends a strong message that misconduct will have global consequences. Also essential for the system's effectiveness is my independence in deciding cases. This ensures my ability as SDO to impose sanctions without any internal or external interference, which further guarantees that WBG contractors know they are getting a fair shake. Staff can get a better sense of the activities of the sanctions system in the recently released World Bank Group Sanctions System Annual Report FY18, which represents the collaborative efforts of colleagues at INT, OSD, and the Sanctions Board Secretariat.

Q:  What can you tell us about being in a management position for the first time in your career?

Before the previous Chief SDO departed for a promotion, I honestly had not thought that much about taking on a management role, but now that I am in the role, I love it and I find it very rewarding. In preparation, I participated in a week-long HR-sponsored supervisors program, which I found extremely useful. Even though OSD is one of the smallest independent units in the WBG, with a total of less than 10 staff and consultants, I have had a lot to learn about issues like budgeting and staffing. I try to keep my door open—literally and figuratively—at all times for my staff and I do my best to encourage feedback and build a cohesive team. I am also blessed with an extraordinary staff here at OSD, including colleagues from China, Romania, Kazakhstan, Turkey, and the United States.

Q:  When you are not deciding sanctions cases, what do you like to do?

I have a wonderful wife and two very active sons—one is 11 and one 8—and I love spending time with them, particularly coaching both of my sons' basketball teams. I grew up in Massachusetts, so I remain a very big fan of all Boston sports teams and revel in the recent successes of the Boston Red Sox and New England Patriots. And when I can sneak some time on a plane or while eating lunch, I try to read as much as possible, usually in the history or biography areas.

Q:  Going back to addressing fraud and corruption in the WBG's projects, what can our staff do to help?

Staff can help by getting familiar with the five types of misconduct sanctioned by the WBG—corruption, fraud, collusion, coercion and obstruction—and reacting to potential misconduct if they spot it. If a staff member suspects that misconduct has occurred, she or he should report incidents to the Integrity Vice Presidency. Staff can learn more about how to report fraud and corruption in a recently-launched e-course:  Integrity is Your Business. The significant number of staff that bring complaints against corruption contributes to my optimism in this area, as well as the growing interest of our client countries in developing efficient responses at the national level.