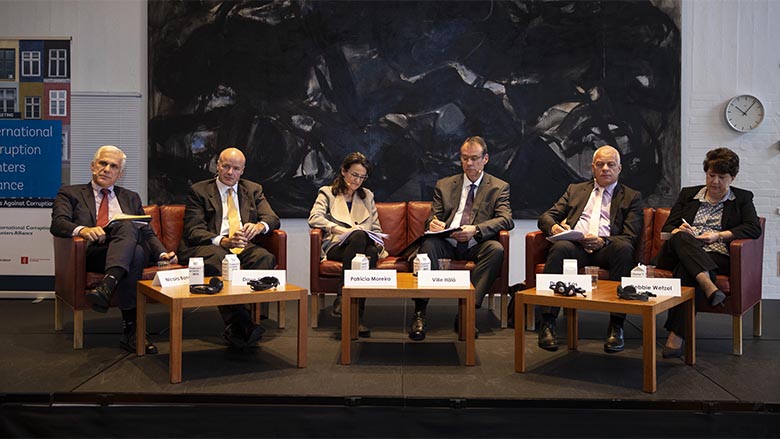 Panelists at the opening plenary of the fourth meeting of the World Bank’s International Corruption Hunters Alliance discussed the impact of technology on corruption, the necessity to make cooperation go beyond commitments on paper, and the challenges to addressing corruption in fragile and violence-afflicted countries. They represented organizations that have been at the forefront of setting anti-corruption policy, investigating acts of corruption and advocating for an end to corruption around the world.

The plenary panel, titled “Coalitions Against Corruption: Building Trust, Promoting Integrity, Ending Impunity,” was moderated by Nicola Bonucci, the OECD’s Director for Legal Affairs. The discussion explored the ways in which international cooperation between law enforcement agencies, civil society organizations and international organizations can further the fight against corruption. 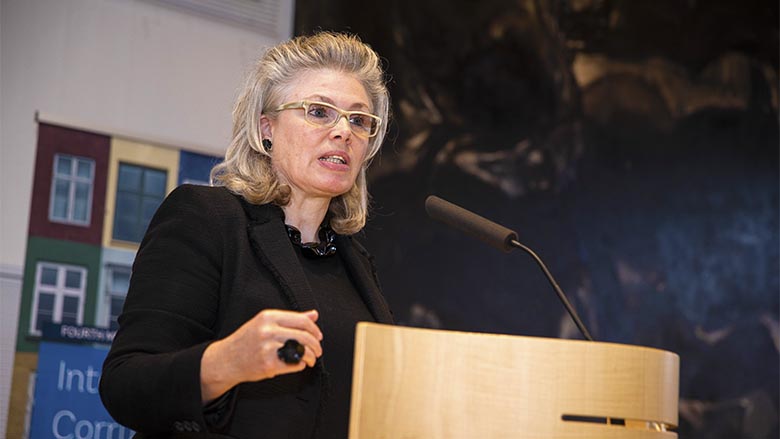 Bonucci set the stage: “The level of investigation, of prosecution, of cooperation, is stronger than ever. The paradox is that the general perception is that the bribery and corruption industry is not in decline,” he said. “Building trust, promoting integrity, ending impunity are indeed three main challenges that we are all facing today.”

Moreira, of Transparency International, pointed out that civil society is currently working under difficult conditions, and organizations interventions depend on the social and political environment of the country in which they are working. She said the potential role of civil society organizations in the law enforcement arena was threefold: They can help with the detection and investigation of corruption, promote public trust, and advocate for reforms that make government more transparent.

“Very frequently what we find is that civil society plays this role of a bridge between the citizens or the whistleblowers, and the law enforcement agencies,” she said.

Itälä, of OLAF, noted that much of the proceeds of corruption gets stashed in off-shore accounts. He said national authorities alone are handicapped, but OLAF, taking a pan-European perspective, has the ability coordinate experts, use forensic tools, and solve complex challenges in transnational corruption cases.

Kos explained how the OECD’s Working Group on Bribery encouraged its member countries to be vigilant about corruption. He said it monitors policies and actions by countries and brings together law enforcement agencies to discuss issues they are having.

“We can see that the level of cooperation is increasing, really, in the last years,” he said.

Wetzel, who leads the World Bank’s work on governance, discussed the “demand side” of corruption –governments and civil servants. She explained how the World Bank supports government institutions, works to improve public accountability, and tries to improve the norms and standards that discourage corruption.

“What we see is that as corruption occurs, it’s really corrosive of trust and it is corrosive for the whole relationship between the citizens and the state,” she said. “And you, all of you sitting in the audience, are the people who are the keepers of trust.”

Questions from the audience touched on the challenges of new technology such as cryptocurrency and artificial intelligence in the fight against corruption, whether ending corruption is a question of skills or political will, and how the anticorruption community can deploy itself as an effective force as opposed to developing into an “industry.”

Fielder, head of investigations in the Integrity Vice Presidency of the World Bank, agreed that emerging technology poses challenges to investigators. He said the World Bank has investigated two cases in which bribes were paid with cryptocurrency. He said another technological innovation he has seen increasing among criminals is the use of anonymized text messages, instead of traditional email, to communicate.

Fortunately, “there’s no honor among thieves,” he said. “So one of the recipients of those text messages will keep a snapshot or something like that, that they will later share with us.”

Itälä, responding to the question about the community’s effectiveness, noted that often cooperation is celebrated in public before it is tested. He said it is important to make sure that it is effective in real cases, when legal obstacles can delay action.

“It’s a mindset – can we trust?” he said. “I really want to see that this cooperation happens in practice, not only in the documents.”

A full replay of the session is available here: http://live.worldbank.org/International-Corruption-Hunters-Alliance-Coalitions-Against-Corruption