Realizing the Promise of Regional Trade in South Asia 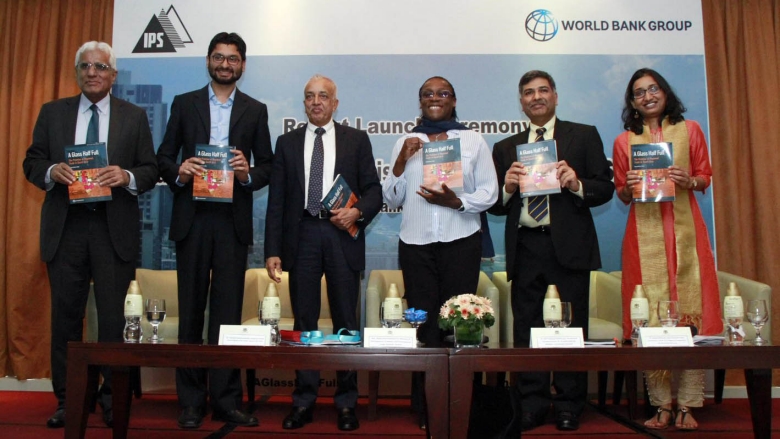 A Glass Half Full: The Promise of Regional Trade in South Asia report launch in Sri Lanka. The report explores the potential of open regionalism, suggesting how policymakers can maximize this to drive economic growth across the region and support deeper global integration.

Such robust links are rare in the South Asia region. For instance, there are no direct flights between Colombo and Kathmandu, Kabul or Paro (the site of Bhutan’s only international airport).

The bilateral air connectivity between Sri Lanka and India has been decades in the making. Sri Lanka saw an opportunity and embraced it, supporting air services liberalization with other policies such as the authorization of visas on arrival for Indian travelers in 2003.

. Simultaneously, air cargo volumes have grown and the prices of air tickets have dropped.

This is one of the success stories documented in a new report from the World Bank. A Glass Half Full: The Promise of Regional Trade in South Asia is anchored in ground realities. It explores the potential of open regionalism, suggesting how policymakers can maximize this to drive economic growth across the region and support deeper global integration.

At the launch, Country Director for Sri Lanka and the Maldives Idah Pswarayi-Riddihough noted that This has implications for a region that is home to 33 percent of the world’s poor.

"One can no longer afford to fear cross-border trade; rather that energy will be better spent ensuring that when borders open, the companies and products that become exposed to this new competition can remain competitive."
Idah Idah Pswarayi-Riddihough
World Bank Country Director for Sri Lanka and the Maldives 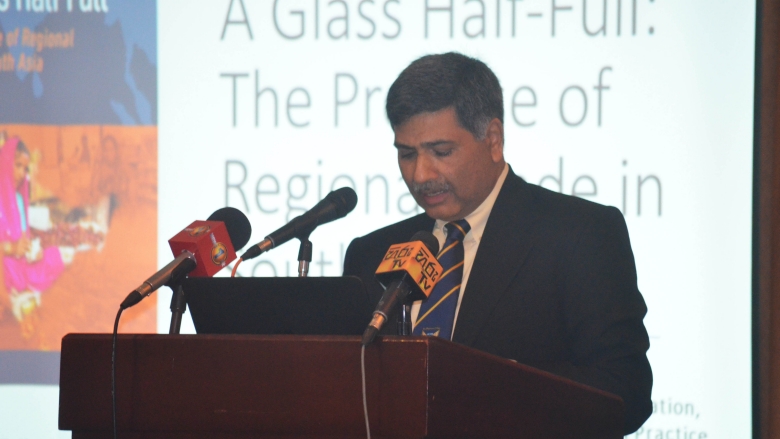 “Both nature and man, but mostly man, have contrived to fragment the region, denying countries and people the benefits of proximity,” said Sanjay Kathuria, author of the report, and Lead Economist and Coordinator, South Asia Regional Integration, in the World Bank’s Macroeconomics, Trade, and Investment Global Practice.

. This yawning gap between actual and potential trade arises because South Asian countries actively discriminate against each other.

High tariffs and para-tariffs are common in South Asia. I As a result, citizens are left holding the bill as they have to pay higher prices.

Despite the existence of the South Asian Free Trade Area (SAFTA), trading with neighbors is not “free”. This is mainly due to the long list of products that are not included under the concessional tariff of SAFTA. Almost 44 percent of Sri Lanka’s imports from South Asia and 23 percent of Sri Lanka’s exports to South Asia falls under this “sensitive list”. Speaking at a panel discussion at the launch of the report, Ravi Ratnasabapathy, Fellow, Advocata Institute, said that countries had set out to protect as many sectors as they could: “Of Sri Lanka’s top 20 exports to the world, 15 of them were either on a negative list or subject to some form of tariff. Of India’s top 20, only seven received any kind of significant concession that was not available previously.”

Poor transportation and logistics infrastructure as well as complicated and non-transparent non-tariff measures continue to drive the disproportionately high costs of trading within the region. For example, it is less costly for Sri Lanka to trade with Brazil than with Nepal. Furthermore, constraints on trade in services and low intraregional foreign direct investment hold back regional trade possibilities in dynamic areas like services and regional value chains. .

Citizens, not politicians, have the most to gain from increased intraregional trade

Panellist Subhashini Abeysinghe, Research Director, Verité Research, asked: “Why do countries have prohibitive tariffs?” She went on to say their existence indicated that domestic prices were significantly higher than international prices. “This means we have large numbers of domestic industries in this part of the world which are extremely uncompetitive internationally.” For customers, this translates into higher prices for lower quality products.

Suresh Shah, Executive Director, the Lion Brewery Ceylon, shared his conviction that Sri Lankan businesses had to face international competition head on to truly succeed. Using a cricket analogy he said: “We have Muralitharan who has 800 test wickets. If Muralitharan had only played local cricket…would Murali be Murali? Sanga is probably the finest left-hand batsman the world has ever seen. Would Sanga be Sanga if he had only played domestic cricket? It’s because these guys went out and competed that they are where they are.”

Dr Indrajit Coomaraswamy, Governor of the Central Bank of Sri Lanka described intraregional trade performance as disappointing but added: “When it comes to trade and investment…the view through the windscreen is somewhat more optimistic than the view through the rear-view mirror.”

He noted that rather than waiting for a grand design to fall into place, businesses had exploited opportunities to move ahead. Between areas such as India’s North East, Nepal, Bangladesh, and Bhutan, cooperation had boosted rail and road links, supported grid sharing and water management. Sri Lanka’s advantageous location in the region also made it a valuable player on the board.

Hon. Malik Samarawickrama, Minister of Development Strategies and International Trade said: “With the South Asian market at our doorstep, growing our exports to this region is simply a top priority.” The report revealed that Sri Lanka could go from earning $1.2bn to nearly $3bn by exporting more to South Asia.

Trust promotes trade, and trade fosters trust, interdependence, and constituencies for peace. Building trust between countries in the region is a critical part of their overall growth. Trade could lead the way in building trust and enabling stronger intraregional relationships. The minister concluded: “At a time when there is a lot of uncertainty around global trade integration, we have much to gain from greater regional integration...This is an agenda all our countries have to work on collectively, so we can make real progress.”