When women get paid work, their families, communities, and countries proper. Unfortunately, when it comes to female participation in the labor force, Sri Lanka still lags far behind other countries. What can be done?

In March this year, as part of the International Women’s Day #PressForProgress campaign, the World Bank office in Sri Lanka invited expression of views of Sri Lankans on priorities and opportunities to improve Female Labour Force Participation (FLFP) in Sri Lanka. Among other things, the survey* was designed to help us identify what Sri Lankans think are the main challenges keeping women out of the workplace; including their views on tangible steps to be taken to support women to gain paid employment.

In a blog that announced the survey and the Who’s Your Role Model? photo competition, Idah Pswarayi-Riddihough, Country Director for Sri Lanka and the Maldives, pointed out that Sri Lanka’s prosperity depends on its women joining the workforce, particularly as the country is aging fast - ‘Sri Lanka is getting older before getting rich. Without an adequate labour force, the country cannot be competitive, hence its ability to deliver basic services and generate revenue to support this service delivery would be hampered.’

We are pleased with the number of responses; though we would have loved more.  Of the 239 respondents, 169 were women and 69 were men, and most of them between the ages of 25 to 35 years of age, and many being graduates or post-graduates.

When asked what are the top 3 challenges women faced in getting to work, 46% of the respondents identified parenting and caregiving responsibilities, followed by social/cultural norms (21%), and sexual harassment in the workplace (15%).

“[There is an] expectation that the woman should fulfil 100% traditionally expected responsibilities at home (fresh food daily, child and elderly care) as well as 100% contribution at office,” one respondent said.

So, although both men and women became parents, it was assumed women would be the primary caregivers.  “I have friends (female) who were asked in job interviews about the age they are going to get married and how many children she will be bearing,” said one respondent.

For those who persevere and continue to work, many face serious challenges. Respondents identified issues with juggling responsibilities at home and work (89%), difficulty with working long hours or staying overtime (73%) and difficulty finding childcare (79%) as being among the biggest challenges. One respondent said that inflexible workplace support systems and policies meant that women with babies or young children struggled to re-enter the work force after childbirth.

But core to this balanced sharing is the need to change attitudes at the family level.  There is a need to promote “the concept of fatherhood and sharing gender roles at home.” Practical measures must underpin this attitude shift; such as flexible hours to help parents who need to balance both work and child care, said respondents, highlighting policies that supported working remotely and the provision of reliable child care facilities at the work place. 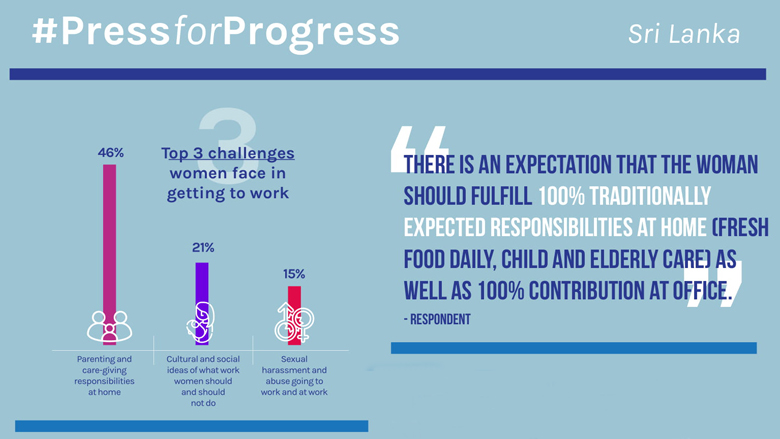 Check out the infographic.

Respondents highlighted how private sector employers seemed to consider employing women burdensome, believing that there were security issues – particularly for women who had to go to the field.  Moreover, there is a pervasive feeling that additional investments are required to provide maternity leave, leading to gender discrimination that began in the recruitment process all the way to promotions.

Respondents felt that “there is still a boys’ club in place. Women have to prove themselves twice as much as men,” said one respondent. Wage gaps persisted, with women being offered less pay than men even though their qualifications and experience were on par – or better; an unfair disparity that was also reflected in who was promoted.

Women who did make it into managerial positions said they found opposition from their male colleagues. “They do not accept women giving orders at work,” said one respondent. “It does not matter if you have done everything expertly, there is no recognition for that.”

Key to changing these attitudes would be to promote “public acceptance and appreciation of working mothers and working women,” said one respondent.

Women experience harassment inside and outside the workplace

Getting to work was often a challenge. 45% of respondents identified a lack of safe and reliable public transport as keeping women from work. One respondent shared her own struggle: “Transport was a major issue for me when coming home in the night. I had to depend on my father or husband but I am still managing with fear,” she said.

Once at work, the harassment sometimes continued. Respondents said there were men who could harass their female colleagues and enjoy complete impunity because they were in senior positions or were connected to other men in senior positions who would cover up for them. “It also puts the safety of other employees at risk when sexual harassers are protected,” said one respondent.

The solution was clear: 70% of respondents said that employers needed to create a welcoming workplace by adopting zero sexual harassment policies. “[We need] law enforcement that demonstrates commitment to zero tolerance of sexual harassment both at work and in public transport, and on the streets.”

The World Bank in Sri Lanka is determined to help drive change to see more women participate and remain in Sri Lanka’s workforce. Together with our partners in public and private sectors as well as civil society groups, we are committed to join efforts to advocate for change. We want this campaign to be informed by the knowledge, the resources and the commitment of our many partners. There are many stakeholders ready to press for progress in Sri Lanka with whom we are seeking to connect and create a common platform with.

As this public opinion survey confirms, there are clear challenges that are preventing Sri Lankan women from claiming their place at work. We hope to move this initiative from conversation to action by developing a common dashboard to track commitments made by key stakeholders, both public and private, which will be available in the public domain for your review as well. Stay tuned for more information on this initiative. If you would like to join our efforts and contribute your time, send us an email to infosrilanka@worldbank.org.

*This infographic is based on an online survey with the objective of inviting public opinion on women’s work. This is not a survey carried out using World Bank’s standard processes and practices.