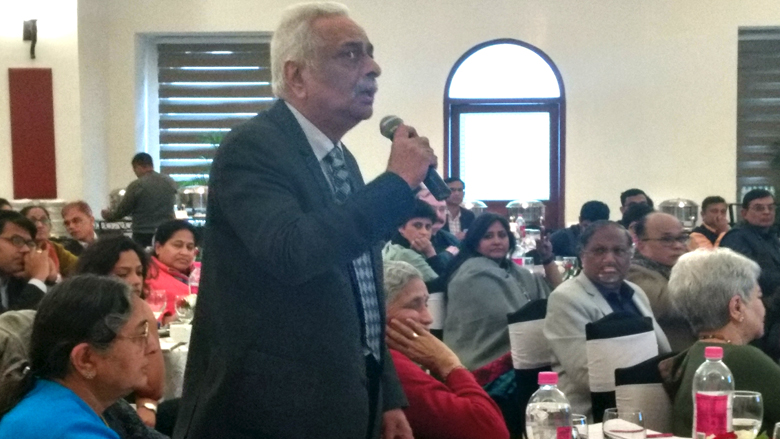 The World Bank Group organized a consultation with CSOs at New Delhi on 29th Jan 2018. Around fifty participants from New Delhi and other states attended.

Mr. N.C. Saxena, former member of the National Advisory Council and former Secretary Rural Development, moderated the discussion.  Mr. Saxena opened the session requesting participants to suggest what they saw was World Bank’s role in India over the next 4-5 years, and the kind of policies, plans, programs, and strategy the Bank should adopt.

World Bank Country Director, Junaid Ahmad presented the Bank’s Strategic Country Diagnostic (SCD), a study which reflected the Bank’s understanding of the constraints faced by India on the path to reaching its full potential.

Participants wanted more analysis on the fundamental question of job creation, one of India’s most pressing development challenges. They asked the World Bank to delve deeper on which sectors held the most potential for job creation, as this was essential to make the skilling effort more meaningful. For instance, asked one participant, does the Bank believe manufacturing is still an option for India, or has the country missed the boat on that?

There was substantial discussion around the SCD finding that Indian firms remained ‘stunted’ and unable to absorb more job-seekers.  A participant said that there could be several reasons for this. For instance, entrepreneurs often preferred to start a second or even a third enterprise rather than increase firm size.

The changing nature of work should also be taken into account, particularly in the manufacturing sector which was impacted by shifts in technology and global value chains. It was also suggested that the Bank look at supporting the private sector with guidance on the latest rules of “responsible business” and best practices from around the world.

It was said that while cities may double incomes, they were not absorbing people in terms of jobs. It was not clear how the cities would continue to absorb migrating populations without creating problems of insanitary conditions, slums, pollution, breakdown of civic amenities etc.

A speaker pointed out that cities needed to be viewed through a place-based lens rather than through a sector-based approach. Participants also said that the concept of smart cities could be made more inclusive by placing greater focus on the needs of the poor and vulnerable, including the homeless, as well by providing affordable housing. The affordable housing sector could benefit from micro-finance as the greatest requirement was for houses that cost less than Rs.2 lakh.

It was also suggested that, as a part of the overall sanitation program, the Bank look at the issue of community toilets in slum areas. This was an area which needed a holistic policy and support, as these toilets - which were now free - were neglected and dysfunctional. Though some corporate houses had involved themselves in sanitation this was not adequate to meet the sector’s huge needs.

Several participants pointed out that job creation in rural areas was critical. A participant said that the SCD did not adequately analyze to the agrarian crisis, the weaver crisis and other crises in rural India.  It was the poorest who faced the brunt of a water crisis, disaster, drought or floods for they had neither the wherewithal nor the training to cope with such events, forcing them to move to cities. If these problems were solved at the village level, it would prevent them from snowballing into a larger issue.

It was said that with new technology coming into farming, and farmers becoming more educated, newer extension methods were becoming necessary to give the required impetus to agriculture.

A participant from the handicrafts/handloom sector said that craftsmen are already skilled so there was no need to create new learnings for them. However, it was necessary to improve ancillary industries to add value to village products. Dyeing, wood seasoning and packaging were areas where skills training could make a difference. It was also said that since macro institutions often fail to take the sector’s huge diversity into account, a much more decentralized approach was needed.

The aspirations of rural youth also needed to be taken into account as they formed a large segment of the rural population.

To promote inclusion, it was suggested that the Bank look at areas of stubborn poverty and carry out a mapping of vulnerability. It was said that the Bank’s work should start with those who constitute the last mile, rather than the other way around.

While appreciating the Bank’s multi-sectoral focus on early childhood development and nutrition, a participated requested the Bank to articulate in detail the ‘how’ of development initiatives in this arena.

Regarding education, a participant pointed out that, in Delhi, government schools spent more on educating a child than private ones, though learning outcomes at private schools were better.

Participants pointed out that the Bank’s work on inclusion also required greater focus on those with disability. It was said that while 15 percent of the world’s population had some disability, the share was likely to be higher in India. The Bank should therefore place greater emphasis on the wellbeing of the differently-abled, especially by enhancing their access to education, skills, and jobs.

Many participants appreciated the Bank’s cross cutting focus on closing gender gaps. Some said the SCD could be strengthened with gender analyses for each sector. It was said that labor policies for women needed to be developed, and adolescent girls needed to be addressed as a separate group, with a special focus on their sexual and reproductive health.

It was pointed out that the report missed mentioning the plight of women farmers and the constraints they face. As men moved to cities for wage work, more women were now involved directly in agriculture, calling for a gendered perspective for conceptualizing an effective program.  For instance, did women cultivators have access to credit and markets or technology?

Another participant noted that gender should not be seen as a binary; instead, transgenders etc. should also be covered.

While appreciating the Bank’s emphasis on resource-efficient growth, participants said that as India was developing, a huge consumer base was coming up, but no serious thought had been given to the efficient use of resources and the management of waste.

A participant pointed that India lacked the capacity to measure and impute values to natural resources, including water, adding that the World Bank could perhaps help develop this capacity.

It was also pointed out that the recycling and reuse of urban waste, currently happening informally, provided a huge opportunity for job creation.

Several participants appreciated the focus on institution building, especially at the local government level. A participant said that while there was a demand for more democracy on the ground, 25 years after the 73rd and 74th amendments a culture of local governance had yet to take full root. It was said that while the WB was one of the first international organizations to support India’s PRI agenda, it now needed to enlarge its focus. Among the measures needed was more knowledge sharing between state institutions and local bodies.

A participant pointed out that greater transparency, accessibility and accountability was needed, with administrators being more accountable to the people.  A speaker from the urban development sector stressed that it was not just about improving the effectiveness of institutions but about “learning the pathways for building effective institutions”, especially at the local level. This was where the Bank could play a role.

It was also said that the citizenry needed to better understand their rights and duties vis-a vis the different levels of government.

A number of participants said that while they agreed with the Bank’s approach of leveraging, this would only be effective if the Bank worked in partnership with various stakeholders, including civil society and the private sector.

It was recommended that given India’s size and diversity, the Bank should focus more on ‘listening’. Both the Bank as well as think tanks and NGOs could benefit from an exchange of knowledge between the two.

While expressing happiness over the Bank’s support of SHGs in the past, a participant pointed out that World Bank engagements with state structures in the SHG sector had driven away NGOs and CSOs, thus ‘robbing the system of its vibrancy’.

Deeper partnerships at the state level

It was suggested that based on its past experience in adopting a state-focused approach to India’s development, the Bank should not only engage with states that have ‘fire in the belly’ but also with those such as UP, Bihar and Chhattisgarh whose needs were far greater. These states could benefit through knowledge transfers from the more advanced states.

To improve outcomes, a participant held that the Bank should put itself under the microscope, re-examine its own systems and reflect on its own accountability.

A speaker pointed out that the regional approach was missing from the presentation. India could learn much from Bangladesh and Sri Lanka and perhaps have more business ties with Bhutan and Nepal.

Throughout the consultations, participants emphasized the need for better data so that decision makers could make more informed development decisions.

Concluding the session, N.C. Saxena made it clear that the Bank could not be expected to solve all India’s problems or look into all the issues facing the country, as many of these were complex issues that often related to the political economy.

Junaid Ahmad concluded the consultation by thanking all those who participated.