Your Feedback on Our Systematic Country Diagnostic 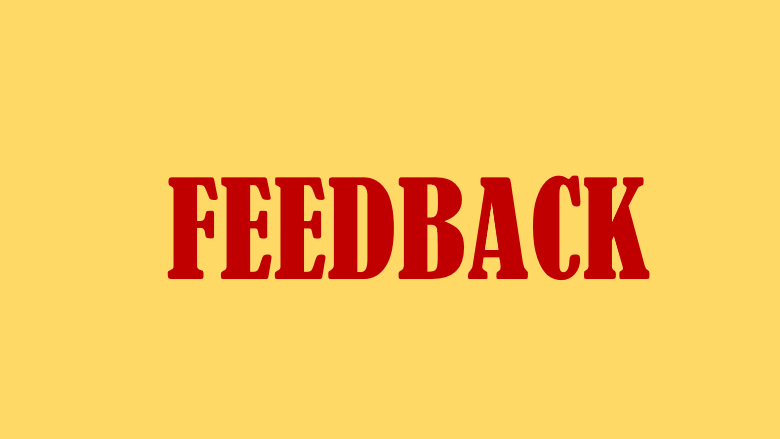 Your comments on our Systematic Country Diagnostic received via email and social media:

We first of all interact with the people of the relative place and spend some time with them to know what a poverty really is? How they manage their lives. What are the difference between their lives and standard of the people not really poor. Because until we not completely interact with them we cannot know the meaning of poverty. Else we stand the main reason behind this we can improve the quality of poverty.

Since the topic is to eradicate poverty and sharing boosted prosperity I would like to state since diversity is not a problem but a solution where a single effort with equity stand has to be taken and then the problems can be solved.

For this the youth should be given a greater role to play rather than being De Facto vigilant, they should be given shadow authorities to cater to the needs of India s demands, secondly the creation of jobs with ample of opportunity and money value would serve the interest with education which should be object oriented with practicality to lead this nation.

Lastly the opinions of every single entity should matter irrespective of their identification so that they can give their best and feel recognized at all possible ends.

India is a very big country with huge population. Many Religious and ethical communities in our society. Everyone needs something difference. But policymakers couldn't think about it. So when they making development plans, it satisfied only few of whole society. If we really want a develop and sustainable society, country or world, than we first talk to each community of our Society . And know about their views, hopes and will. Than we make our plans and apply it for whole.

This is to thank you for giving me an opportunity to attend the World Bank Group Country Engagement Dialogue 2017-18.

It was a learning experience, indeed.  I do hope and pray that the Paper will include Persons with Disabilities as far as health, education and medical care is concerned.

It is undoubtedly absolutely necessary to mainstream them and make education, health & other facilities accessible for them.

Thanks for inviting me for the consultation on the draft India SCD Report yesterday.  It’s a very interesting report and it was great to be part of the discussion.

In addition to the two points that I made yesterday—about the need to pick the states carefully and focus on the low income states if possible; and about the need to get some more clarity on jobs, where the message was very fuzzy—I would like to add the following:

(1)  Inequality--It is great to see a discussion of the high and rising inequality in India and the danger it poses to the sustainability of growth and its .  I find that the policymakers here don’t seem to yet have bought into the dangers of rising inequality.  I wonder if it would be possible to show some alternative scenarios and what happens to extreme poverty if inequality keeps rising as it is now or if policies are adopted to either contain it at the current level or reverse it, as some countries have done.

(2)  Wage Increases—I think it might be useful to clarify the sentence on page 16 (and in the executive summary) about “Low risks of sustained wage increases for many years, at least for the lower skilled workers.”  This should be a very good thing to achieve (and will be the key to reducing inequality and poverty) but here it sounds like it would be a negative kind of risk.

(4)  Taxes—In the section on taxes on page 73, it would be good to elaborate on what a more progressive tax system would look like.  India is an outlier on not having either an inheritance tax or any wealth tax.  It would be good to mention these as potential sources of revenue to boost the tax effort, especially with extreme concentration of wealth with the top 1%, and  2/3rds of the wealth in India being inherited wealth.

Data—Table 1 in Box 17 is shocking.  India used to be ahead of other countries on data and now has fallen so far behind.  And it is ironical that if you try and discuss high malnutrition or high underemployment with government officials, they just turn around and says we have no data!  It would be great if the Bank could help modernize data collection and availability in India.

In the recent past, Government of India has been engaged in introducing ‘prosperity/benefit sharing model’ especially in the areas related with the ‘Land, Forest and Water’ resources. It would be really interesting to look the ground realities after these.

Are these ‘Sharing Prosperity’ realistically reaching out to owners/people who conserve the resources for the larger benefit of the society (they are not just beneficiaries)?

LAND: In the absence of ‘Land Reforms/Use Policy’ rampant land grab witnessing everywhere. Land Acquisition Act (2013) remains relevant only in the debates while in the majority land acquisition actually 2013 has not been applied. Thus benefit-sharing (of non-monetary opportunities) are become mere mockery. Second, the growing greed of urban (territory) expansion is responsible for (voracious) land-speculation (market), where every aspect of ‘shared prosperity’ completely undermines the dignity/identity/livelihood of land losers.

FOREST: In the absence of political/administrative will the ‘Forest Rights Act 2006’ hardly reached to 17% of tribal and forest dwellers. Unfortunately, none of the State(s) interested to popularize the FRA-2006. How much money has been spent for messaging FRA-2006? Second, massive deforestation across dense-forest zones completely undermine the people-existence (and their constitutional rights) actually caused serious conflicts across India. After deforestation, all the (monetary) benefits have always been shared (only) with the forest department. Current CAMPA Act (2017) also re-emphasizing the same. How is possible to secure ‘rights of the tribal/forest dweller’ within the framework of FRA-2006 and/or CAMPA (2017) which remains challenge for any possible ‘shared prosperity’.

WATER: The serious absence of ‘River Basin Studies’ for optimum water use are responsible for (men made) disaster. For example, in Mahanadi Basin (Orissa and Chhattisgarh) this is known for one of the most fertile paddy land now witnessing massive industrialization. According to an estimate, the proposed power generation (44000MW) will completely suck the Mahanadi and tributaries after these projects. Which model of ‘shared prosperity’ we would like to propose for potential affected communities? In another case of Assam (Brahmaputra and Barak valley) where average 2-4 lks acres of land lost every year (due to flood & erosion) – people are only losers! The absence of ‘Flood Plain Zoning’ shows apathy of the State and the system to create any ‘checks’ for millions of people who are thrown beyond possible ‘prosperity’ every year.

         Water Use Board : determining the ‘optimum use’ of water for non-agricultural activities

MINERAL: The serious bypass of MMDR-2016 & PMKKKY-2017 actually deprived millions of people who were legally promised for ‘shared prosperity’ through mining of minerals. For example, in Dantewara (Chhattisgarh) the 60% of District Mineral Fund (DMF) earned was transferred in neighboring districts. While in Madhya Pradesh, by constituting State Mineral Foundation the state is transferring major chunk of ‘mining benefits’ (money) to politically privilege areas. These examples are clear enough to understand the mind-map of State, who in spite of legally binding provisions actually bypassing the laws and mortgaging the prosperity by political design.

Ekta Parishad is engaged in enhancing the people’s potential towards understanding the shifts in the legal-policy frameworks – how it improves or reduces the people’s participation (through local governance) and to what extent these shifts ensure/threaten the sharing of any prosperity or opportunity to the people.

It was a pleasure meeting you and quite exciting to share the new vision for the WB Country Partnership Framework for India being developed by you and your colleagues. I quite agree that "Business as Usual" isn't quite the right strategy for addressing the kind of challenges faced in India.

The resources the WB Group may contribute to India's development may be a fraction of the total committed by the State, they are by no means insignificant in their impact. These interventions could well be the catalysts needed to find solutions for better public service delivery. I feel one test would be the extent WB assistance helps in developing the institutions, infrastructure, innovations and capacities that enable wide ranging private participation. The focus on Climate Change and Natural Resource use efficiencies is very welcome. Of course ensuring desirable outcomes would need everyone pulling in the same direction.  I may mention that currently, among other activities, I am also assisting and advising Development Alternatives, a think tank and Non-Govt. organisation that has been working on climate change, sustainable livelihoods and empowerment ever since mid-1980s. I do share your commitment towards greater engagement with the civil society to achieve more effective outcomes.

I wish you all the best and would be happy to engage with the WB in developing and articulating this vision with whatever experience I have had working in the Government over the last four decades, and since 1995 on several projects with the WB.

India of my vision would have a common schooling system for all people. She should have a wise and liberal government. The state sponsored hatred and communalism must disappear. People's life and their humanity must be given highest value. Wisdom,not ignorance;humility,not arrogance;warmth,not contempt must envelope all ruling governments. All policies and systems must respect and cherish human beings just as they are. I know this is a dream,but I am walking the path to achieve it. I wish if world bank connect and encourage all like-minded people towards a better India.

Health and women welfare, priority for growth in India

Demonetisation has shown that even the informal sector has the earnings equal to an average salaried employee. CSR has improved the social services much better. Population is so high that it is impossible to retain everyone in aspect of a global employment index. Therefore, if properly regulated, the informal sector is the back bone to the formal sector, without it rich won't be any richer, and people would be more scattered. Government schemes are working, but the mediators should be controlled in order to pass the benefits directly to the needy, and they should be held accountable for all of their ill-doings. If a person in an informal sector is making Rs. 200 per day, he is equal to an employee sitting in the office and getting Rs 6000 per month as his salary. Regulation of income at all aspects would definitely help in dealing with the corruption spread through mediators in a informal sector.

We should have a scheme under that every house should receive some nutrition for their children, specially in rural areas and poor community who doesnt have access for those items.

Education subsidies, health and food subsidies should maintained by government of India

quality control in food products,raw & packed must be taken at priority besides combating malnutrition

Sincerity in Skill devolopment endeavors will bring change.
Albeit when hurdles like corruption & babudom are treated

I am engaged in connecting youth to skill courses. I have observed that there is lack of awareness among potential candidates. Another important hurdle is lack of psychological and cultural acceptance of low skilled courses although they are well rewarded in terms of good employment.

Even if there are skilled labor, the code of responsibility and accountability is absent , and then there is always a risk of exploitation at work. Transparency should be there to engage people and a moral sense, to treat everyone as equal.