Skip to Main Navigation
This page in:_
FEATURE STORY November 26, 2017 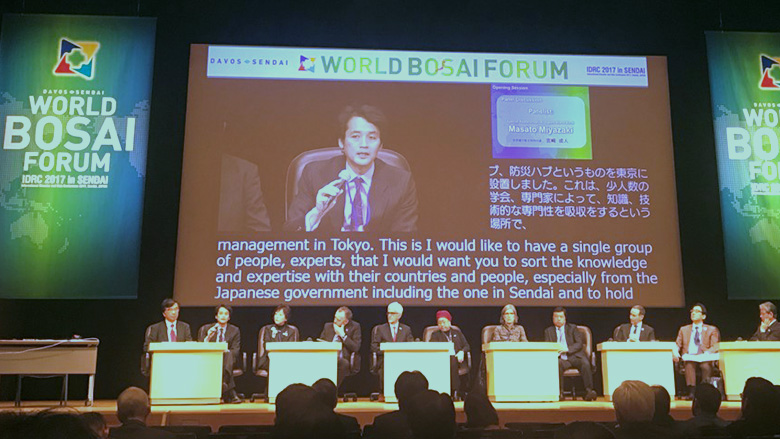 Photo: Mr. Masato Miyazaki presented on the World Bank’s role in scaling up DRR, during the Opening Ceremony

More than 900 participants from national and local governments, academia, private sector, international organizations, and civil society from around the world gathered in Sendai, Japan from 26-28 November 2017 for the “World Bosai Forum (WBF): International Disaster Risk Conference”, the first edition of a biannual conference organized in collaboration with the International Disaster Risk Conference (IDRC) in Davos Switzerland.

“Bosai (防災)” is a Japanese word that is comprised of characters that signify “prevention (bo: 防)” of “disasters (sai: 災).”  However, the actual concept of “Bosai” in Japan is widely understood and utilized more comprehensively – going beyond simply “disaster prevention” but also bringing together disaster risk reduction, preparedness, and response, encompassing comprehensive efforts that are essential to disaster risk management (DRM).

Sendai is a global leader city in promoting the importance of “Bosai” in the world; as the city valiantly rebuilds and recovers from the 2011 Great East Japan Earthquake and Tsunami, Sendai is also making significant contributions to strengthen international cooperation and exchanges on disaster risk reduction.  In 2015, Sendai hosted the Third United Nations World Conference on Disaster Risk Reduction (WCDRR) which led to the endorsement of Sendai Framework for Disaster Risk Reduction 2015-2030 (Sendai Framework).  Furthermore, together with various stakeholders, the city is working towards bringing together Japanese and international stakeholders to share knowledge and experiences on DRM.  The World Bosai Forum, which is now planned to be held in Sendai every two years, builds on Sendai’s efforts to further its engagements and leadership on DRM in Japan and globally. 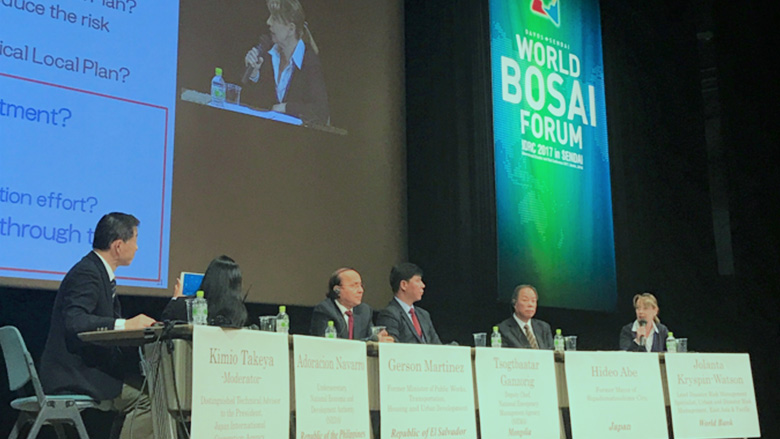 Photo: Ms. Jolanta Kryspin-Watson participated in the panel discussion on solutions for increasing investments in DRR

At the Forum, the World Bank (WB) partnered with key Japanese DRM stakeholders to engage in discussions and showcase collaborative efforts on mainstreaming “Bosai” within WB operations as well as through support to the Asia-Pacific Economic Cooperation (APEC) Finance Minister process on Disaster Risk Finance (DRF).

Mr. Masato Miyazaki, Special Representative of the World Bank in Japan participated in the World Bosai Forum’s Opening Ceremony on Sunday, November 26th.  During the ceremony, children and youth from areas affected by the March 2011 disasters shared lessons they experienced from the magnitude 9 earthquake and tsunami, which left more than 15,000 people dead and many still unaccounted for. Students from Otsuchi High School in Iwate Prefecture explained their efforts to chronicle — through photos taken from fixed observation points — the process of reconstructing the town of Otsuchi.

Ms. Jolanta Kryspin-Watson, World Bank Lead DRM Specialist for Asia and Pacific Region, participated in a panel discussion hosted by JICA entitled, “Investing in Disaster Risk Reduction for Sustainable Development.” The objective of the session was to discuss practical solutions which can be applied globally at the national, regional and local level for increasing investments in disaster risk reduction by sharing experiences and discussion among panelists. Together with government leaders from Philippines, El Salvador, and Mongolia, Ms. Kryspin-Watson  showcased World Bank’s comprehensive support to the  governments on mainstreaming DRM – by not only supporting disaster resilient, high quality infrastructure investments but also stressing the importance of complimenting these hard investments with soft approaches – including developing an enabling policy environment, strengthening the governance capacities, increasing stakeholder awareness, and promoting inclusive planning and implementation.

The World Bank Tokyo DRM Hub organized a session on “Engineering a Solution for Disasters: The Promise of Resilient Infrastructure.”  Through this session, Mr. Francis Ghesquiere, Manager of Global Facility for Disaster Reduction & Recovery (GFDRR), Ms. Jolanta Kryspin-Watson, WB Lead DRM Specialist, and Mr. Kiyoshi Murakami, Deputy Mayor of Rikuzentakata City discussed why mainstreaming disaster risk management was important in strengthening resilience and what were some of the good practices and lessons learned from efforts they have been engaged.

In his remarks, Mr. Ghesquiere pointed out that today, the World Bank invests more than US$5 billion annually to support developing countries building disaster resilience. On resilient infrastructure engagements, the WB’s Global Program for Safer Schools, is partnering with a range of academic, civil society, and development actors, and is working to ensure safer learning environments and minimized disruption to educational services for millions of students. Mr. Ghesquiere also emphasized how the Bank is working closely with the Government of Japan on scaling up investments in other high-quality, disaster-resilient infrastructure including roads and railways as well as advancing best practices on dam safety and disaster resilience for South Asia and East Asia and Pacific regions.

Moreover, Ms. Kryspin-Watson shared her experiences on key challenges and opportunities to mainstreaming disaster and climate resilience in infrastructure investments in East Asia and Pacific region including specific engagements being advanced by the World Bank to reinforce financial resilience, conduct multi-hazard assessments, and strengthening the building regulatory framework in the region.

During his intervention, Mr. Murakami showcased the experience of Rikuzentakata’s local government’s response and recovery from the devastating Great East Japan Earthquake and Tsunami in 2011. His remarks focused on the different roles of the national and local governments and their collaborative mechanisms in emergency social assistance after the disaster. Lessons from the disaster response are now integrated in the city’s masterplan system as a preparedness measure against future disasters.

The session showcased World Bank and Japan’s joint efforts and further commitments through the Japan-World Bank Program for Mainstreaming Disaster Risk Management in Developing Countries, and the Tokyo DRM Hub, to continue supporting  developing countries across the globe in making infrastructure investments more resilient through financial and technical support. 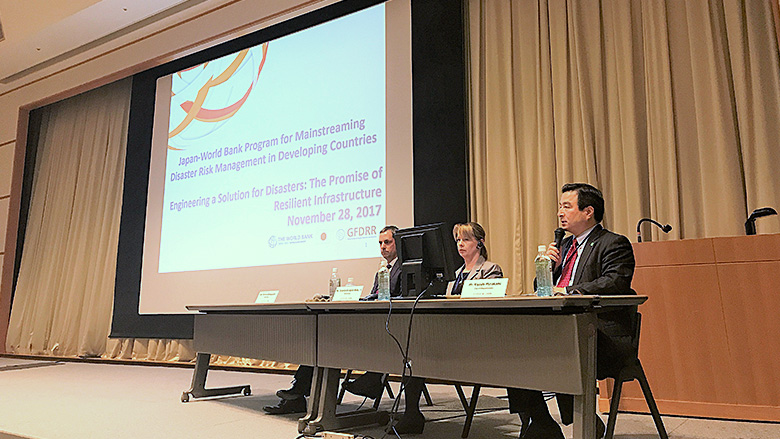 APEC related session, “A Disaster-Resilient Community in the Asia-Pacific: The Power of Science and Insurance” 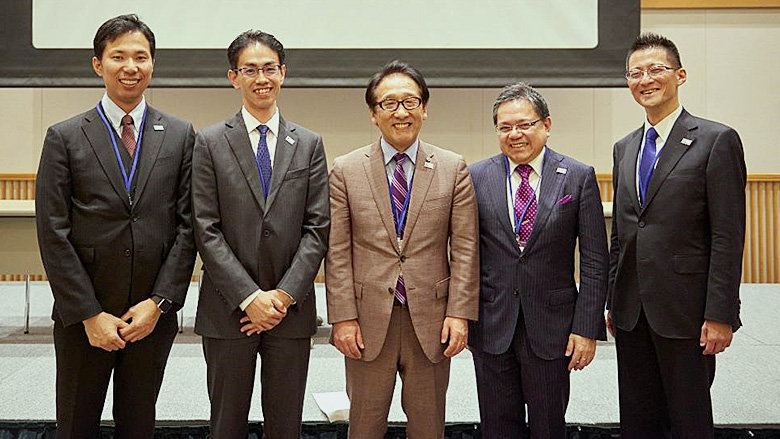 At the keynote speech, Dr. Fumihiko Imamura, Director of IRIDes and WBF Committee Chairperson, presented the state of the art technology to forecast tsunamis, which was developed after the Great East Japan Earthquake and Tsunami in 2011.  Mr. Daiho Fujii, Director of Research Division in International Bureau, Japanese Ministry of Finance, emphasized the importance of building disaster resilience in a comprehensive manner ex ante disasters, introducing how the earthquake insurance in Japan incentivizes household to build quake resistant houses and contributed to prompt disaster recovery after the Great East Japan Earthquake. Dr. Julius Caesar Parrenas, APFF Coordinator, presented the risk layering approach of DRFI demonstrating the recent innovative programs in the Philippines.  Mr. Masaaki Nagamura, Division Head of Corporate Social Responsibility from Tokio Marine & Nichido, shared the various roles that private insurance companies can play – not only in the context of post disaster insurance payouts but also for mitigating the disaster risk.

The session closed with the adoption of a statement proposed by the session panelists that calls upon the global community for a set of four concrete actions below:

The outcome of this session was extremely significant and timely, as it directly builds on, and contributes to, the World Bank’s ongoing partnership with Japan Ministry of Finance and private sector on DRFI at the Asia-Pacific Economic Cooperation (APEC).  Given their high exposure to risks of natural disasters, advancing comprehensive financial risk management against disasters is a common and urgent interest of Finance Ministers in APEC member economies.  In 2018, APEC Working Group on DRFI under the chairmanship of the Philippine and co-chairmanship of Japan is planning to organize a workshop to explore how to implement national arrangements of domestic disaster risk insurance programs and funding mechanisms for disaster response through social protection systems. It is expected that the workshop will be hosted in one of the APEC countries, such as Tokyo, Japan, with support from WB DRFIP and Tokyo DRM Hub.

The Japan–World Bank Program for Mainstreaming Disaster Risk Management in Developing Countries, launched by the Government of Japan and the World Bank in 2014, supports technical assistance, pilot projects, thematic initiatives, knowledge mobilization, and capacity building along the four pillars of the DRM framework described in the Sendai Report.  The program is managed by the Global Facility for Disaster Reduction and Recovery (GFDRR) and implemented by the Tokyo Disaster Risk Management Hub (DRM Hub).

For example,  the DRM Hub has worked on showcasing Japan’s  global leadership in protecting cultural heritage sites from natural hazards, scaling up seismic risk reduction that are so prominent in Tokyo and many cities across Japan, and ensuring that preparedness efforts are inclusive, well understood and actionable by all stakeholders.