Shaping the next generation of climate defenders: Asmita’s story

“I wanted to become a teacher… to fulfill my parents dreams and to be in a noble profession,” says Asmita. “I like shaping young minds and moulding them to be good citizens.”

Intelligent and passionate about passing on knowledge to the next generation, the 24-year old from Dugavatu, in Fiji’s Rakiraki Province, takes pride in both her home and her school. Located in Viti Levu on the western side of Fiji, Rakiraki is an area of green valleys, lush beauty, and an enormous community spirit. It’s the only place Asmita has ever called home.

“This part of Fiji is very peaceful and people are loving and caring,” says Asmita. “My family have been living here for three generations, a very long time, this is where my grandfather was born.”

Yet less than a year after beginning her position at Bayly Memorial School, Asmita and her students’ lives were threatened when Category Five Tropical Cyclone Winston bore down on the area in mid-February 2016. As the cyclone moved closer, students were sent home due to the heavy rain and winds, and Asmita joined her family in trying prepare their home for what was to come.

“We tied the house down; we tried to tie it three or four times… but it was really difficult. As soon as my brother and father came down from the roof and we came inside the house; half of our roof was gone. Within seconds the other part of the roof was gone.”

As her parents and uncle tried to secure the house, Asmita was tasked with protecting her elderly grandmother and younger brother and sister. For several hours, they were at the mercy of the storm, huddled under furniture, waiting for the calm.

“I was sad and scared. That house, when we were young, my grandfather built it and everything was just gone.”

For Asmita, the heartache of losing her family home was compounded on return to her school, which was severely damaged: the roof of the school had been ripped off, two classrooms were badly damaged, and most of the school’s resources – particularly books – were destroyed by the Cateogry Five winds and rain.

“I just felt like crying after seeing the school,” reflects Asmita. “This school was beautiful. After the cyclone, I would say the school lost a lot of things. And it was not safe for the students to come and study in the school. All the students and teachers were relocated to other schools.”

"I just felt like crying after seeing the school. This school was beautiful. After the cyclone, I would say the school lost a lot of things. And it was not safe for the students to come and study in the school. All the students and teachers were relocated to other schools"
Ashmita Ashwin Kamal
Teacher at Bayly Memorial School 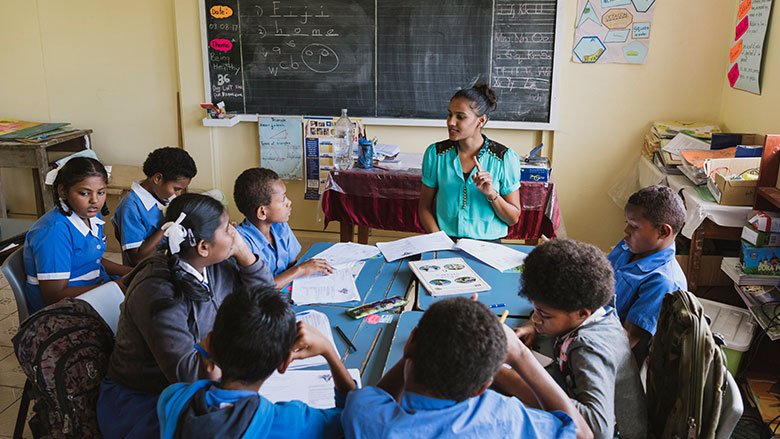 Preparing the next generation

Today, Bayly Memorial School is a work in progress; being rebuilt slowly after Cyclone Winston. The typical sounds of a school – laughter, songs and chatter – are, at least for the moment, frequently mixed with the sounds of drills, hammers and generators.

Yet Winston has also brought a new level of understanding in the classroom, with Asmita now ensuring the children learn and understand the causes and impacts of climate change as part of their curriculum. Asmita and her fellow teachers regularly attend climate change workshops to pass on the latest information to their students, including emergency drills focusing on storm preparedness.

“[We teach the students] about pollution and how landslides are happening from the clearing of forests or using excessive chemicals or setting fire,” she explains. “It’s about exploring the contributing factors of climate change... changing weather patterns and how human beings are contributing to it and how we can stop it.”

Since the school’s reopening, Ashmita has noticed that her students seem keenly interested in her climate change classes.

“Since they have gone through the experience, they are very attentive. They participate and they [speak from their own] real life experiences.”

For Asmita’s family, the post-Winston period has been difficult. After many months of living in a temporary structure her carpenter father had built after the storm, they will all soon to move into a new home.

At a community level, she hopes that greater work is put into educating people about the dangers of cyclones through informative videos and community meetings. For the moment, Ashmita is focused on hope; that despite climate change her village will remain safe.

“No one can predict the weather. But my wish is that no more cyclones come.”