Rupeni is a Fijian who lives his life in the spirit of ‘vei lomani’; having built 13 houses for his community in the aftermath of Cyclone Winston

Fiji, November 7, 2017 - In the early evening of February 20th, 2016, Fijian government officials called a nation-wide curfew as a cyclone moved west towards the centre of the country. Yet Rupeni Vatugata, a 74-year old father of four, says he and his wife didn’t notice any of the usual natural signs of an oncoming cyclone.

“In the morning, we didn't know there would be a cyclone. We came from Suva just to check on our house. By the afternoon when winds started, and the disaster office officials came into our village to say the cyclone will come today, and that everyone was to go down to the village hall.

“After that, I said for my wife and I to pray, prepare, and then we went down. When we were [in the hall], I never thought that my house would be damaged; I had faith in my prayers.”

Having lived through 1972’s Tropical Cyclone Bebe, which killed 28 people, Rupeni thought he knew what was coming. But nothing could have prepared him for Winston, which would become the largest storm ever recorded in the Southern Hemisphere.

Across Fiji, Winston’s wrath was unprecedented. 44 people were killed and countless others were injured. An estimated 40,000 homes were severely damaged or destroyed, including many in Rupeni’s village of Namarai, in Ra Province, on the northern coast of Viti Levu, Fiji’s biggest and main island.

“It was scary. The first winds blew from the south,” says Rupeni, reflecting on Winston’s fury. “All the children and their families were in the village hall during that time [and] you could only see when you looked outside – it was like a fog – I couldn't see a single rain drop. That was the strength of the wind; it evaporated the raindrops.

Fortunately, no lives were lost in Rupeni’s village, however the damage left in Winston’s wake was more than physical.

“People were scared and sad because of [what had happened to] their belongings. There were no pots, no plates, no cups, no beds. …In three hours, all of people’s belongings [had] disappeared; items they treasured.

"This is how I live my life: to help others. “I have been doing carpentry for over twenty years and I don't get any payment for it. I do it out of love and to help those that need their houses built. I’m truly happy."
Rupeni Vatugata
Carpenter 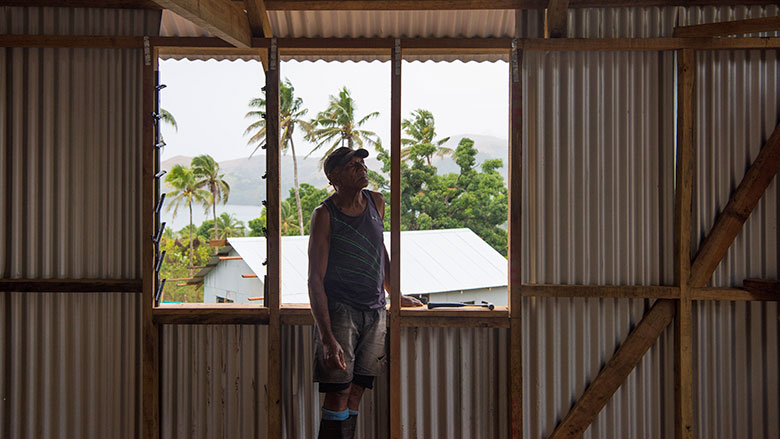 Rupeni, an experienced carpenter of twenty years, said his thoughts turned to re-building almost immediately. He quickly assembled a team of builders from the community and led the rebuilding effort.

“At first, we started building to provide shelter, since there were hardly any houses. Tents came later. We would rebuild our village communally. I was the team leader for rebuilding in the village. Everything went well because we look after each other and work together.”

Over eighteen months on, Rupeni has led the rebuilding of more than 13 houses in his community and surrounding villages.

At 74 years old, Rupeni, who has had a long life of hard work, would be justified in now taking a moment to rest. Yet Rupeni says his biggest motivation to help people is the Fijian concept of vei lomani, which directly translates to ‘love in action’.

“This is how I live my life: to help others,” Rupeni says. “I have been doing carpentry for over twenty years and I don't get any payment for it. I do it out of love and to help those that need their houses built. I’m truly happy.”

He reflects on Fijians’ resilience as both a source of national and village-level strength.

One reason why Fiji is paradise is because it’s a country that cares. …We care for each other.

“I can walk through this door and that door and I’m free to do so. That’s the love we have in this community. It is our gift from God to love each other.”