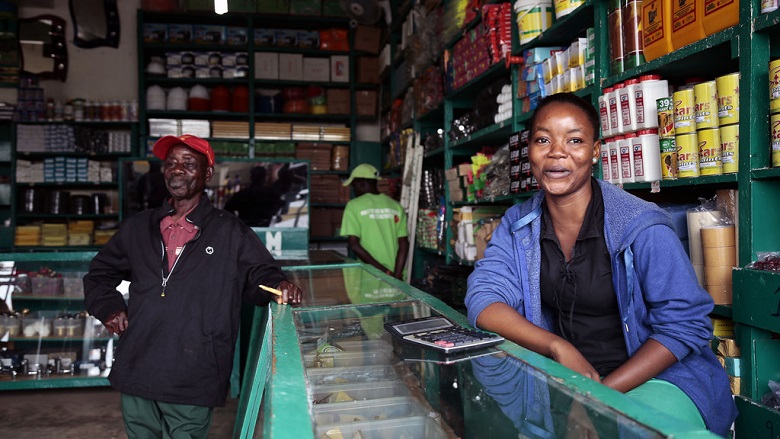 November 2, 2017 - Having an effective credit infrastructure, which includes the option to obtain lending against movable assets, and fair and efficient mechanisms, to resolve debt is critical to improving access to credit for small businesses.

This was true for Liberia, a country which until recently had no legal framework to resolve insolvency and no regulatory and institutional framework for lending against movable assets, and where small businesses languished.

As the fragile country started recovering after years of violent civil war and strife, many of its institutions had to be rebuilt from scratch – including many parts of legal and credit infrastructure.

Access to credit in Liberia is exceptionally low. Liberia ranks 172 among 193 countries as a place to do business, according to the latest Doing Business report. The country also scores poorly on the two Doing Business indicators which measure how courts resolve commercial and insolvency matters, which serve as proxies for debt recovery. However, its ranking on the specific insolvency indicator has notably improved, largely due to the reforms the country has implemented over the last year.  Resolving Insolvency was the only Doing Business area which Liberia reformed in the last year, and the improvement is significant: Liberia moved from rank 168 in Resolving Insolvency (second worst ranking among all measured economies) to 106 this year, improving its distance to best practice by 31.25 % (see Figure below).

"In the past, it was difficult to resolve cases where a debtor had multiple creditors because there was no framework for how to resolve them."
Judge Mappy-Morgan
Chair of the Commercial Court of Liberia 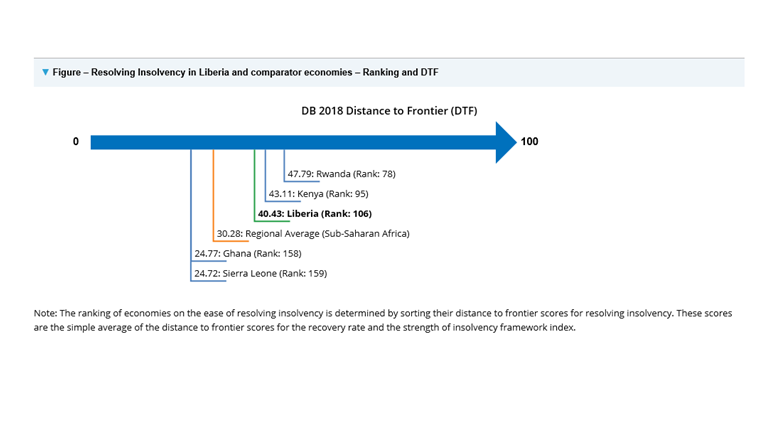 While focusing on debt resolution would seem like a counterintuitive approach to stimulate lending to small and medium-sized businesses (SMEs), it was an issue that local stakeholders, particularly banks, pointed out as a problem.

Without an effective way to resolve debt disputes, local banks were reluctant to lend. They took less risk and required more collateral, all of which hindered small businesses’ access to credit.

Liberia has been working on its commercial law framework for the last seven years. With the World Bank Group’s assistance, in 2011 the country established the Commercial Court to hear commercial disputes, including debt disputes over $15,000.

In addition, to remove the collateral gap constraining lending to businesses and increase access to finance to micro, small and medium enterprises (MSMEs), the World Bank helped Liberia develop regulatory and institutional framework for lending against movable assets. This resulted in the enactment of the Revised Commercial Code in 2010 and subsequently the establishment of a modern, electronic collateral registry.

While these were huge milestones, they weren’t a solution for resolving smaller debts, which are more likely to be incurred by SMEs.

Also as the Commercial Court’s caseload grew each year, it soon became clear that Liberia was lacking a component of the legal framework to handle debt resolution.

Liberia did two things to improve the way to resolve debt in the country. It drafted a new Insolvency & Restructuring Law and launched a mediation program within the Commercial Court, both of which went into effect at the start of 2017.

The new Insolvency & Restructuring Law provides for rehabilitation of businesses in distress and fair liquidation of nonviable businesses with multiple creditors.  It also provides a safety net for both debtors and creditors, allowing them to limit their financial losses when a company fails.

“In the past, it was difficult to resolve cases where a debtor had multiple creditors because there was no framework for how to resolve them,” says Judge Mappy-Morgan, Chair of the Commercial Court of Liberia.

Judge Mappy-Morgan herself has had such cases at the Commercial Court.

“The Insolvency & Restructuring Law is important in reaching fair resolution of those cases for the multiple parties involved,” she said. Judge Mappy-Morgan will present Liberia’s insolvency reform experience at a peer-to-peer session during the 2017 Africa Round Table (ART) on insolvency reform jointly hosted by the World Bank Group and INSOL International, on 9-10 November 2017 at Mauritius.

Also, the newly-established mediation program within the Commercial Court took on its first set of debt-related cases, successfully settling most disputes in one day to the satisfaction of both parties.

For example, there was a case again a business owned by three people that had an unpaid bank loan. Since two owners couldn’t be found, the case proceeded against the remaining owner, who insisted that he wasn’t personally liable. The bank initially refused to compromise on amount or full liability of the remaining owner.  However, over a three-hour mediation session, the bank was persuaded to lower demands and the owner was persuaded to pay one-third of the amount and to assist in the location of other partners. This case presents a negotiated series of actions to resolve the case that wouldn’t have been achieved in a single ruling by the court for one side or the other.

In another case, there was a claim of rent by a deceased’s estate against a relative. The tenant insisted he owed no money but was persuaded over the span of two mediation sessions that timely settlement was in his interest, and he agreed to return for another session.

Here the intractable tenant was persuaded to pursue settlement. Had the case gone to court, a court ruling would have taken longer to reach and would have cost more.

The Insolvency & Restructuring Law and the mediation program are the latest additions in Liberia’s effort to improve access to credit to businesses and support the growth of the private sector.

Efforts are ongoing to build capacity of lending practitioners, insolvency administrators and lawyers on the nuances of movable asset financing and resolving insolvency. Since the collateral registry was deployed in 2014, a total of 1,283 financing statements relating to transactions valued at US$264 million have been registered, with women-owned businesses accounting for over 80% of the active registrations.

“These reforms are critical to raising banks’ confidence in lending, which is expected to improve access to credit, particularly for SMEs. The World Bank Group is continuing to help Liberia strengthen its financial infrastructure, including working with the Central Bank of Liberia and other key stakeholders to improve the credit reporting system and to bridge the huge information asymmetries in the financial system,” said Frank Ajilore, IFC Country Representative in Liberia..

Officials at the Central Bank of Liberia have expressed confidence that banks will start using mediation, and that their confidence in insolvency as a tool for recovery will grow.

“With these reforms, the confidence level of lenders is increasing, and this is something that all stakeholders need to support,” said Milton Weeks, Executive Governor of the Central Bank of Liberia.