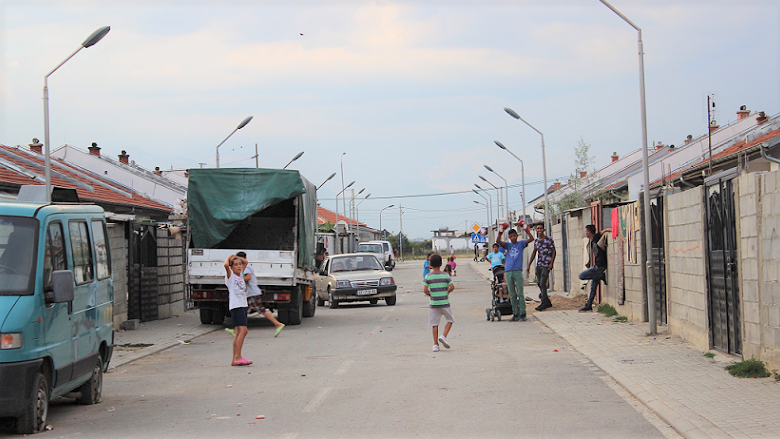 Kolonia is a small neighborhood in the former industrial zone of the town of Gjakova, in western Kosovo. Most of the 120 households here – which include people from the Roma, Ashkali, and Egyptian minority communities – struggle daily with poverty and unemployment. Until just last year, they lived in dilapidated homes - before a donor-funded project built new houses and implemented basic infrastructure, including running water, a sewage system, and paved roads.

The neighborhood was also recently connected to the internet – via fiber optic cables – which the residents see as a significant improvement to their lives.

“They said they would pay the last of their money to have access to the internet,” says Fatos Stavileci of Fiberlink, the company that provided the fiber optic service. “We decided to pilot an extension of our fiber network to this area, so now every house in Kolonia has a broadband internet connection.” 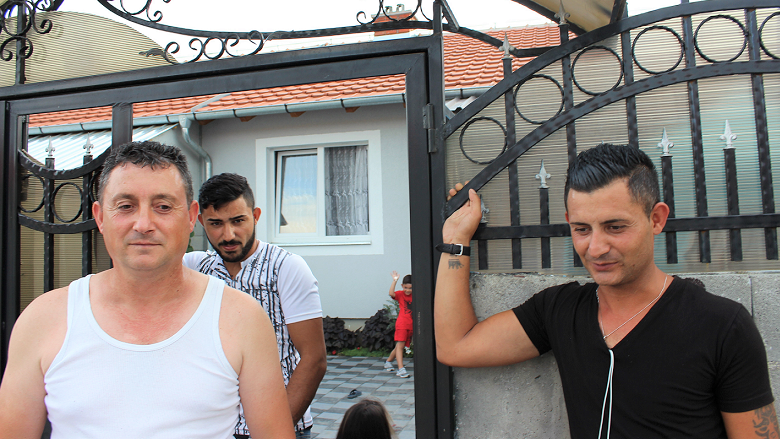 The Juniku family, Kolonia.
Residents of the small neighborhood of Kolonia, in Kosovo, struggle daily with poverty and unemployment. Things are changing now with a donor-funded project. The neighborhood also recently got a broadband internet connection.

Despite the financial hardships, the residents of Kolonia try to pay regularly for the internet connection. “We all have internet at home now; it has become part of our life,” says 50-year old Jeton Juniku, a resident of Kolonia. “Paying the monthly fee is sometimes difficult, but whenever I have money I try to pay for the internet.” 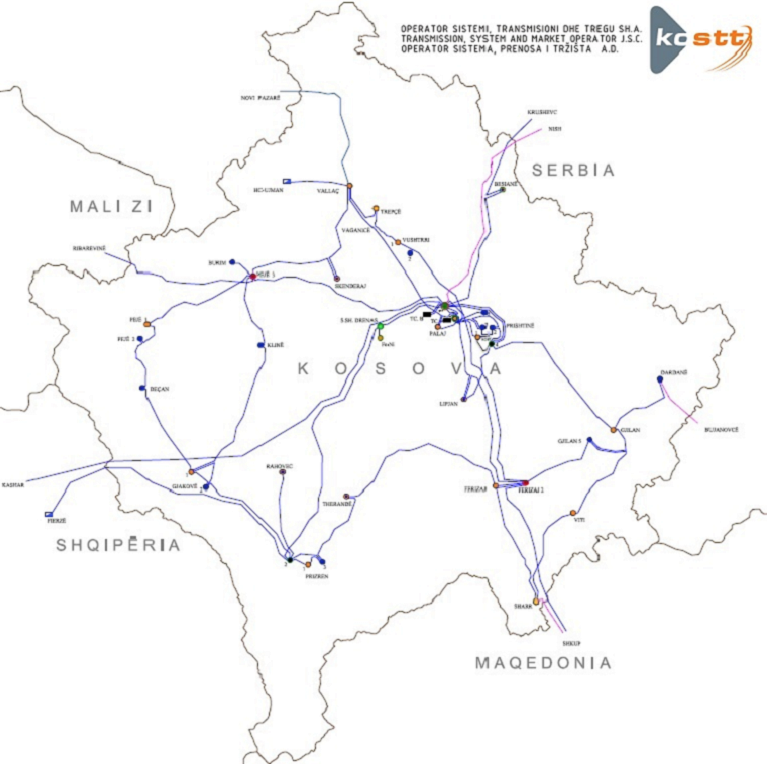 Map of utility’s optic fiber network. Photo: KOSTT
Jeton’s 17-year old son, Mergim, explains why it is so important for this community to have reliable internet access. “Most of us use the internet to talk to our family members who live abroad,” he says. “We talk to them almost every day and it is important to have a good internet connection to be able to use the free phone call services like Skype, Facebook, or Viber.”

Kosovo has a large diaspora, many of whom reside in different countries around the European Union (EU). Indeed, it is estimated that one out of every three Kosovars lives abroad. And, importantly, remittances they send to Kosovo are one of the main drivers of the country’s economic growth. Household income from remittances accounts for around 15% of Kosovo’s total GDP, representing an important part of the country's social safety net. These remittances reach some 20–25% of households and provide considerable income – especially for poorer households, such as those in Kolonia. 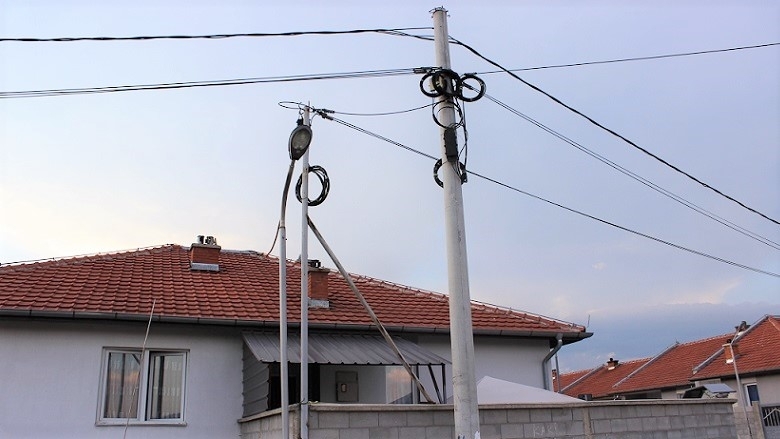 Fiber cables extending from house to house in the newly built Roma neighborhood of Kolonia.
Kolonia’s residents not only benefit from access to the internet but, since August 2017, they also have much faster and more reliable internet connectivity. This is thanks to Fiberlink using the fiber optic infrastructure of Kosovo’s Energy Transmission, Market, and System Operator, KOSTT - a public company - for its internet exchange with two other internet service providers in the region.
"Most of us use the internet to talk to our family members who live abroad and it is important to have a good internet connection to be able use the free phone call services. "
Mergim Juniku
Resident of Kolonia, aged 17

“We have increased our capacity to provide internet services and improve the quality of all the services we offer to clients,” says Fatos Stavileci. “This is a good base for the development of our company, for the internet, and for the communications technology market in the country,” he adds.

In mid-2016, Fiberlink, along with two other internet service providers (ISPs) operating in neighboring municipalities - Vista and AceWaves - expressed interest in the fiber assets owned by KOSTT. In June 2017, KOSTT and the three ISPs negotiated and signed a contract – the first transaction of its kind in Kosovo and one that directly impacts over 30,000 customers. With access to KOSTT’s network, the company is now positioned to expand their customer base even further – potentially covering around 60,000 households (accounting for 300,000 residents) in the southwestern part of Kosovo. 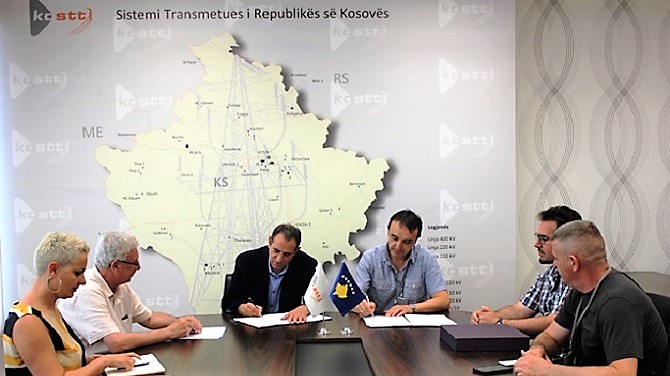 “Our idea from the beginning has been to share a part of our fibre optic network for commercial purposes that would increase the possibilities for efficient and low cost telecom service for customers,” says Kadri Kadriu, Acting Chief Executive Officer of KOSTT. “The World Bank supported KOSTT with studies and expertise on best practices on utilizing this capacity in the future.”

KOSTT has installed over 1,100 km of optical fiber on its high-voltage electricity transmission towers, thereby creating a powerful broadband network to deliver communications and information services to all major settlements in Kosovo.

By actively sharing its spare fiber infrastructure, KOSTT is living up to its regulatory and public commitments as a state-owned utility. In addition, this approach will help fill existing broadband infrastructure gaps in rural areas, where over one third of households currently have no commercial access to broadband. KOSTT’s opening up of its fiber network to commercial leasing will be indispensable in bridging this digital divide.

Eshref Mazreku, CEO of Vista, recounts a story about one of his customers in the village of Studenicani, near the town of Suhareka. A farmer who breeds cows has installed an internet video surveillance system to guard his cattle.

“The farmer thanks me every time I see him,” says Mazreku. “He says that now his customers don’t need to come to him to get meat. Instead, he’s selling it online.”

Funding for this activity was provided by the Public-Private Infrastructure Advisory Facility (PPIAF)*.

The Public – Private Infrastructure Advisory Facility (PPIAF) is a multi-donor technical assistance facility that is financed by 11 multilateral and bilateral donors. Established in 1999 as a joint initiative of the governments of Japan and the United Kingdom, in coordination with the World Bank Group, PPIAF is a catalyst for increasing private sector participation in emerging markets. Its mission is to help eliminate poverty and increase shared prosperity in developing countries by facilitating private sector involvement in infrastructure.