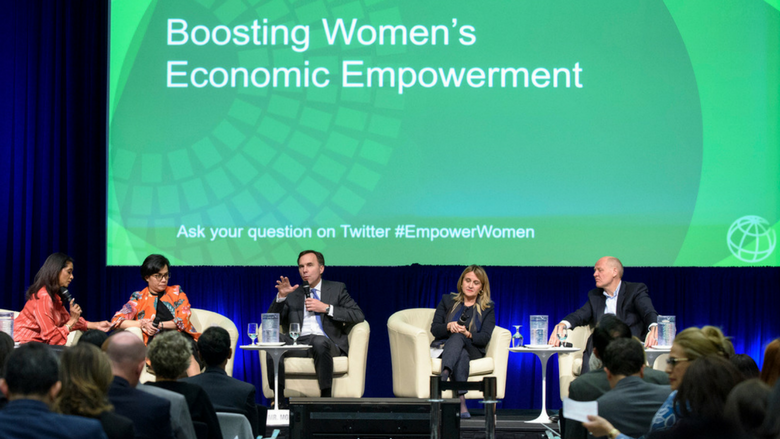 WASHINGTON, June 26, 2017 – Providing equal access to financial services, helping give women more power over income and assets like land and technology, and professionalizing the care-giving sector can help accelerate progress in women’s economic empowerment, especially in developing countries. But how should countries get it done?

These and other practical questions were addressed by World Bank Group President Jim Yong Kim, UN Executive Director Phumzile Mlambo-Ngcuka, finance ministers and CEOs during the WBG-IMF Spring Meetings flagship event on Boosting Women’s Economic Empowerment. The speakers called for finance ministers to join with the private sector and others who want to take action to expand economic opportunities for women, which is key to helping countries reach their full economic potential.

Through its operational work on the ground and high level dialogue at venues such as the WBG-IMF Spring Meetings, the WBG aims to catalyze action and work side by side with governments, companies and other partners to close remaining gaps in access to education and maternal health in those countries where those gaps persist, while also accelerating efforts to enhance women’s economic opportunity: more and better jobs, ownership and control of productive assets like land and housing, access to finance, technology and insurance services, and increased capacity and opportunity to act independently at home, in the community and in various levels of government.

However much work still lies ahead if the world is to achieve gender equality by 2030 - Sustainable Development Goal (SDG) 5 and related targets. In particular, women’s economic opportunity lags that of men in every country of the world, at a cost to individuals, families, communities and economies.

The speakers discussed various aspects of this challenge, including how to help women access financial solutions. In opening remarks, WBG President Jim Yong Kim said, “We’ve known for a long time that access to financial services can be a powerful driver to help people lift themselves out of poverty. With a concerted push from governments, the private sector, and multilateral institutions including the World Bank Group, we believe we can close this gap.” Kim offered examples of WBG efforts, including doubling the amount of money its Banking on Women program lends to women entrepreneurs from $1 billion to $2 billion and the WBG’s testing of innovations to find alternatives to collateral requirements at commercial banks.

Sigve Brekke, president and CEO of Telenor Group, one of the world’s largest telecommunications companies, said they are providing access to financial tools for communities in emerging markets in Asia.  “In a country like Myanmar for example, you know less than 10% of the female population have a bank account,” he said. “Our objective then is to include them all in the banking sector by providing them with a digital banking solution. This is a tool to grow their economies, and make sure that females are also included in the financial sector.”

Simona Scarpaleggia, CEO of IKEA Switzerland, added that one way governments can work toward supporting women entering the workforce or owning assets is by changing laws that discriminate against women and addressing social norms that influence those laws.  Scarpaleggia co-chaired the UN Secretary General High Level Panel (HLP) on Women’s Economic Empowerment, which issued two reports focusing on transformative policies and actions that governments, the private sector, and civil society can take to advance women’s economic empowerment. The proposed policies were chosen based on seven priorities identified in the HLP’s first report, Leave No One Behind: A Call to Action for Gender Equality and Women’s Economic Empowerment, which presented evidence to support the case for addressing systemic constraints to economic opportunity for women. The reports summarize information from a range of sources, including Women Business and the Law, which found that nearly 190 countries have discriminatory laws that impede women’s employment and entrepreneurship.

Finance minister of Indonesia Sri Mulyani Indrawati illustrated Scarpaleggia’s point, saying she revised income tax laws in Indonesia to allow women to file taxes separately from their husbands for the first time. “When you can file taxes independently, this means that you have your own assets and you are going to be able to access banking and finance,” said Indrawati, who also served as World Bank Group managing director and COO from 2010-2016.

Bill Morneau, Canada’s minister of finance, offered another example of what government leaders can do to reach larger scale solutions, having instituted a requirement that each government ministry must look at their budgets and analyze the impact on advancing gender equity in the workplace before he will consider their proposals. “We believe that getting to gender equity, empowering women is one of the central features of what we’re trying to achieve,” Morneau said. “We start with the idea that we need to look at our budget as a vehicle for making a difference.”

Scarpaleggia added insight on specific actions companies and institutions can take, citing her company IKEA Switzerland’s having already achieved gender parity. She said it took making gender equality an explicit corporate value, strong and committed leadership, willingness to look for and then acknowledge gaps between stated corporate values and actual behavior, and making a conscious decision to change.  Once the decision was made, the company focused on building awareness and socializing the idea among staff internally to help overcome initial resistance, which usually accompanies such a big change, she added. “We changed our internal processes to ensure they were gender neutral. We worked on unconscious biases. We set goals. We committed on the occasion of the HLP to reach gender parity throughout all our units in the world by 2020. It takes work, and leadership plays an important role. But it IS possible.”

Echoing efforts by the other speakers, Brekke said Telenor is also working towards gender balance within the company by meeting targets in top management positions. While empowering women economically is good for families, communities and countries, Brekke noted that gender equity is also good business.

“It’s good business because we need to represent our customers, and we see that a much better balance between genders creates innovation, creates better services, creates better products,” Brekke said. “That’s why it’s so important to set these targets and not only talk about it, but actually do something with it in practice.”

President Kim, who became the first UN HeforShe Thematic Champion of an international financial institution - committing to close the gender gap within senior management by 2020 - highlighted unpaid work, such as care-giving for children and elderly family members, as a critical impediment to women’s economic opportunity. “We must redistribute care work,” said Kim. “It too often remains the sole domain of women and that has got to change.”

WBG Senior Director for Gender Caren Grown added in a follow up interview that “care needs to be seen as a public good. It produces the next generation of workers, it has important development effects for children, and is an important sector of employment for women and men. Solving this will need both public and private sector support and financing.”

That sentiment was shared by Mlambo-Ngcuka, who said, “Unless the private sector and public sector make this private issue a public one, many women might never work.”