For Ethiopia’s farmers, landscape management and tenure lead to more resilience and income 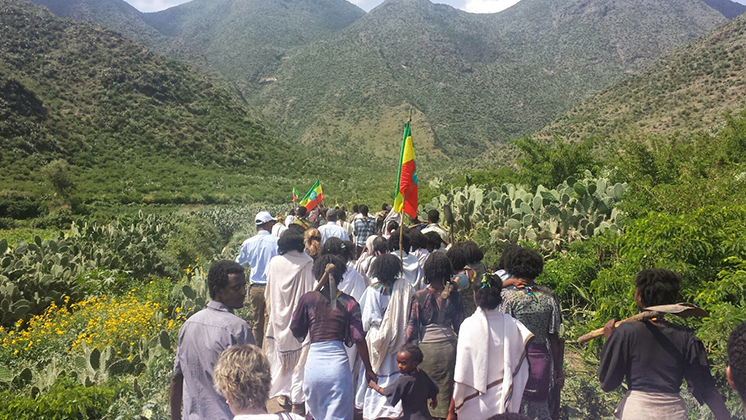 Off to work we go.

“You have to see it to believe it,” said Abraha Hagos, an Orthodox priest and a father of ten who lives in Tigray region’s Enderta woreda (district) in northern Ethiopia. Now he has yields that are double what he used to have just three years ago.

Enderta woreda was once known for its dry and dusty landscape: It struggled with irregular rainfall, drought, and the results of decades of poor land management. Abraha, whose farm is located at the foot of Adi Qilqil mountain, had often let his animals graze freely on the mountainsides, like others in his community.

Whenever it rained, the run-off from the overgrazed and degraded hillside used to swamp the farms below. “I used to complain, ‘how can we develop’?” said Abraha. “In addition to the flooding, most of the springs in the area had dried up, and the soil on my farm was like crushed rock. It couldn’t hold water.”

He tried to come up with ideas to improve his farm, like digging a deep well. But he was reluctant to make such a large investment or to ask his neighbors to contribute to the expense. Neither he nor the other farmers had legal proof of land rights to their farms. And, because of this, Abraha, like many others, worried that his land might one day be appropriated.

Therefore, he believed investing in the costly process of digging a deep well to be risky and unsound.

Putting communities at the heart of land management

In 2015, Abraha, along with other farmers in his kebele (neighborhood), joined the second phase of a program called the Sustainable Land Management Program (SLMP).

Originally, the initiative of the Ethiopian government, a larger SLMP program also works to restore degraded lands, organizing the communities that live on them to take part in land restoration by building conservation structures like terraces, water retention pits, trenches and gullies that slow down the flow of water and reduce soil erosion.

In doing so, it supports rural infrastructure, such as roads and small irrigation schemes, and opportunities to make a living. “By investing in both landscapes and people, Ethiopia is showing strong leadership in building up its resilience to periodic drought,’’ said Magda Lovei, Practice Manager for Africa at the World Bank’s Environment Global Practice.

In Ethiopia, where the government owns all the land, lifetime leases or landholding certificates are used as an incentive to get people to help restore degraded land. The government is also addressing the registration and certification of rural land.

Through the second phase of the program (2013–2019), the SLMP2, about 266,000 households have received landholding certificates legally. This number is projected to increase to 500,000 by the end of 2018, with the mapping of the number of land parcels expected to reach over 2 million (4% of the country’s total parcels of land). 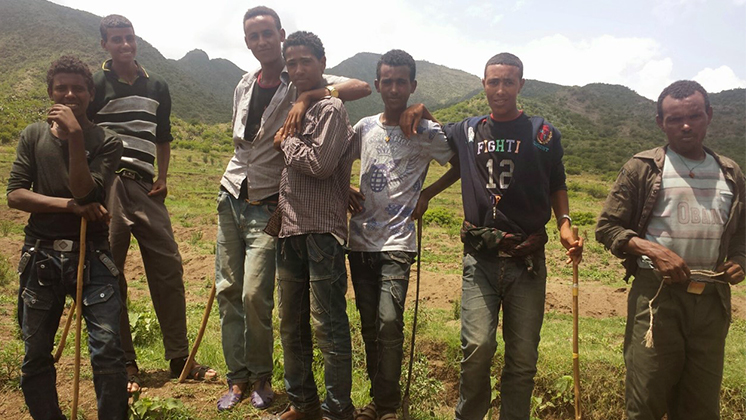 Previously landless, many have been given individual or communal landholding certificates.

Having secure land tenure means you can make money

Under the SLMP2, the community in Endarta woreda agreed to allow the enclosed hillsides of Adi Qilqil to be used for income generation by single mothers and previously landless youth who had organized themselves into associations. These two groups of people were then given legal certificates so that their rights to access communal land were protected.

Moges Nigus, 35, is a resident of Jijiba kebele but he has never owned landholding rights. Given the area’s natural aridity, Moges did not believe it would be profitable for him to rent land to farm there either. Instead, he worked as a day laborer in nearby woredas. From this, he earned about 80 ETB per day (about $4 per day) to support his wife and five children.

But, as a member of the youth association, Moges now uses the enclosure on the hillside for honey production. He helps manage the youth association’s 70 hives in addition to his own 18. Each of his hives produces about 20 to 25 kilograms of honey twice a year, which sell for up to 300 ETB ($13) per kilogram.

This has allowed Moges to increase his income tenfold. “Because of our land certificates, we feel ownership over the land,” Moges said. “We can add to the number of hives we have. We just need to be strong and work hard. No one else can take it from us.”

From his earnings, Moges can now afford to rent land from other farmers to farm for himself. He no longer considers the area to be too dry and infertile to invest in.

“The project lies at the intersection of water and land management, land rights and land use,” said Stephen Danyo, the World Bank’s task team leader for it. “This is the type of innovation that is generating results, reducing drought risk, and building climate resilience.’’