Supporting Better Health Services for Mothers and Children in Tajikistan 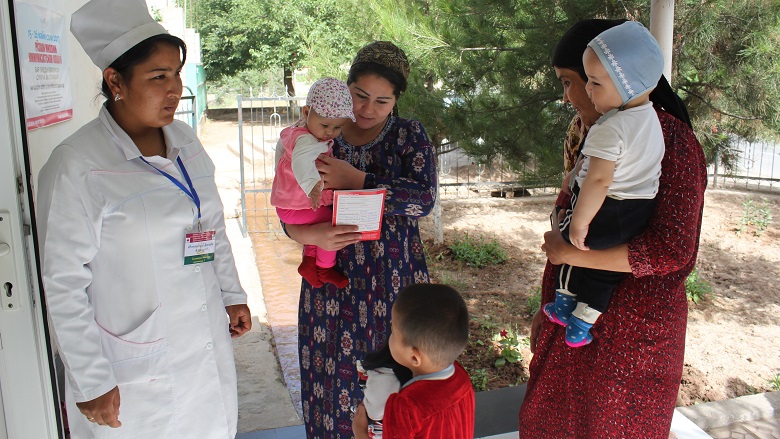 Poverty reduction in Tajikistan has been significant over the past couple of decades. From 2000 to 2015, poverty fell from over 83% to about 31%, while economic growth averaged at 7.7%. Despite this important progress, however, adequate access to quality healthcare, education, heating, water and sanitation remains a challenge for many people, especially families in rural areas.

Access to piped drinking water and to sanitation, in particular, is unequally distributed, with major implications for people’s health and wellbeing. As such, infectious diarrhea and other serious waterborne illnesses are considered to be leading causes of infant and child mortality and malnutrition in Tajikistan.

From 1992 to 2015, the level of undernourishment among the general population in Tajikistan increased from 28% to 33%, compared to just 6% in neighboring Kyrgyz Republic. In 2012, the stunting rate among under-five year olds in the country was 26% of all children, and 32% of poor children. Children who are poorly nourished, who are stunted, and who do not receive adequate parenting or stimulation before their 5th birthday, are likely to learn less at school and earn less as adults; they are also less ready to compete as adults in an increasingly globalized economy.

The World Bank is working closely with the government of Tajikistan to improve maternal and child health and nutrition in the country, through two ongoing projects: the Japan Social Development Fund and the Health Services Improvement Project.

A grant from the Japan Social Development Fund is helping to improve health and nutrition among children under five years of age, as well as pregnant and breastfeeding mothers, in 14 food insecure districts of the southern Khatlon Province of Tajikistan. The project tackles issues at the community level, providing quality seeds and fertilizers to help families grow nutritious food, delivering critical micronutrient supplements to pregnant mothers and children, and raising awareness among women and volunteers about how to detect and prevent childhood illnesses.

In less than two years, the project has started showing positive results: the number of underweight children under 5 years of age in the project districts decreased by 20%; levels of stunting decreased by 2%, and wasting (acute malnutrition) decreased by more than 8%. In addition, more than 100,000 mothers, 1,000 health workers and 300 community volunteers were educated about improved nutrition practices, the benefits of exclusive breastfeeding, and how to detect signs of childhood diseases.

The Health Services Improvement Project focuses on improving the service delivery and effectiveness of quality in primary healthcare facilities, including those in remote areas. By providing training to medical personnel, renovating and equipping healthcare facilities and, most importantly, by providing hands-on guidance and incentive payments to health workers for better results through an approach called “performance-based financing”, the project aims to increase both the coverage and the quality of basic primary health care services.

Performance-based financing is designed to reward primary health care workers and facilities for their good performance – but only after they have been found to have successfully met targets that were agreed upon beforehand. The results reported by health care facilities are checked and verified rigorously every quarter, before they can receive incentive payments.

This new system has been piloted in 10 districts of Tajikistan so far, and results have been significant: in just one year, the reported number of fully vaccinated children increased by 26%, the number of women receiving four or more antenatal care visits increased by 14%, and the number of women using contraceptives increased by over 27%, while the average score of service quality remains above 85%. In addition, the project has trained over 500 health workers on family medicine and over 5,000 on clinical and non-clinical topics.

Tajikistan has the youngest and fastest-growing population in Central Asia. This demographic profile is a huge asset to the country in developing its economy and achieving its development goals. And the World Bank will continue to invest in clean water, sanitation, schooling, and affordable and quality health care in Tajikistan, with a view to helping every Tajik child grow up healthy and succeed in the future.

All Multimedia from Tajikistan »
Api