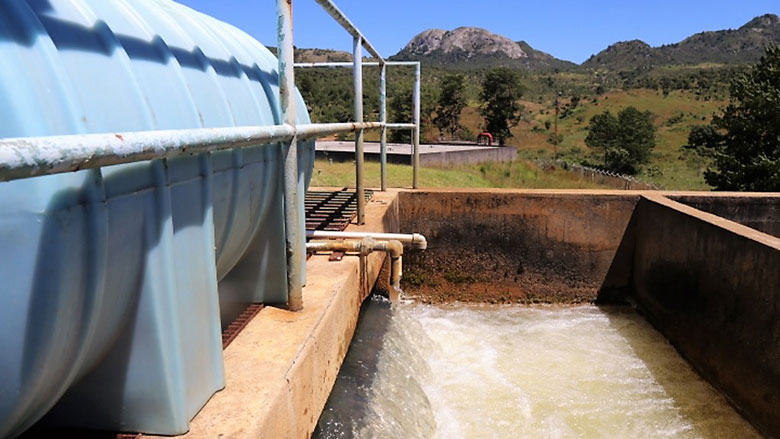 Part of the waterworks that were assessed during the peer review exercise in Mutare.

HARARE, June 1, 2017 - Mention the Bulawayo City Council to Mildred Dube, a resident of the city, and her face lights up. “That must be the best run council in Zimbabwe,” she says. “They have a call center where I have called to enquire about my bills,” she explains.

Zimbabwe’s Local Authorities (LAs) have been under pressure to improve their services since 2012 and, as a result, have been encouraging people to pay their bills to enable them to do this. The LAs are in charge of running some of Zimbabwe’s main cities and larger towns.

Through the Service Level Benchmarking (SLB) initiative, members of the 32 local authorities involved in the scheme visit each other every year as part of a peer reviewing exercise. The peer reviewing team is usually made up of different experts or specialists in water, engineering, health, or finance among other things, from different towns. It might also include representatives from the Ministry of Water and Environment and the Urban Council Association of Zimbabwe.

“It’s easy to think you are doing well, when you never see what others are doing,” said Kimpton Ndimande, Bulawayo City Council’s Financial Services Director. “We see how other councils are performing and take some lessons back with us, and ideas on how to improve our work.”

Through the Water and Sanitation Programme (WSP), the SLB exercises have been providing data and technical support to help improve the standard of service Zimbabwe’s urban authorities provide, building the capacity of their staff to generate reliable data that tracks their performance and allocates locally generated revenues better.

Improving data reliability and encouraging a spirit of openness has also improved accountability when it comes to service provision.

During the first few years of the process, the focus was on strengthening institutional systems to generate credible data, which allowed Zimbabwe’s water and sanitation service providers to be compared with other global utilities through the World Bank Group IB-NET platform. Then, in 2016, greater emphasis was placed on data analysis, the production of performance improvement plans, and high quality sector budgets.

“I believe we are making progress and, while this year’s scores are not much different from last year, I am confident that in the next peer review exercise we will do very well, as we allocated a budget towards maintenance, which is a major shift from budgeting for repairs only,” said Daniel Nyirenda, Acting Town Engineer and Mutare’s SLB focal point.

This shift in budget allocation follows a recommendation that came out of the previous SLB exercise. This recommendation was not peculiar to Mutare, the fourth largest city in Zimbabwe with an urban population of at least 190,000. Almost every urban center in Zimbabwe had exceedingly low maintenance budgetary coverage ratios, pointing to unsustainably low investment in terms of maintaining their infrastructure.

The bad scores received during the SLB exercise were due mostly to debts owed by residential and commercial users, the prevailing economic situation in Zimbabwe, and the dilapidated state of the country’s infrastructure in general.

After receiving a bad score, a town or city council is mandated to produce a Performance Improvement Plan (PIP), which provides more information and a budget on how the local authority will address gaps in its services, and reach a set performance target or benchmark next time around.

Performance backed up by data

The SLB data and process has been used by councils to help them strike up partnerships with development partners and use their existing revenues more efficiently. This has resulted in general improvements being made by major urban local authorities, even to the extent of curtailing the recurrence of dangerous epidemics, such as the 2008/09 cholera outbreak.

Examples of such improvements include:

The SLB process has also improved the working relationship between the Ministry of Local Government Public Works and Ministry of National Housing, other sector ministries and agencies. It is not, however, without its challenges, and there is still a lot more work needed to fully institutionalize it.