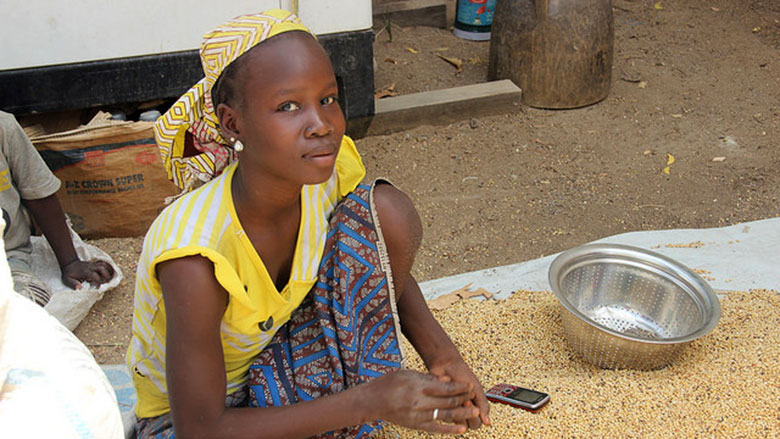 YAOUNDÉ, May 19, 2017—In a field located on the outskirts of Maroua in the Far North region of Cameroon, Marie Bahane looks pleased as she sees the 22 bags of sorghum she produced from her fields this year carried away to her cooperative’s head office to be cleaned and packaged for sale. During this same period last year, she had managed to produce only 8 bags of sorghum.

Marie is from a region plagued by insecurity and prone to climatic hazards, where farmers are often engaged in subsistence agriculture because of they lack the resources, support, or modern techniques to do more. The Agriculture Investment and Market Development Project  (AIMD) has paved the way to a solution to this and given these farmers fresh impetus.

The creation of partnerships between agricultural producers and agribusiness is one component of this; it seeks to boost the production of maize, sorghum, and cassava crops, while improving the quality of some 300 producer organizations.

“I am a member of the CROPSEC cooperative and this project has given me inputs and taught me new techniques to improve the productivity of my fields,” Marie tells us delightedly. “Not only have I been able to increase the area on which I was growing sorghum, but my production increased significantly last season. Now I am producing more than 22 metric tons of sorghum.”

“I am earning more, which has allowed me to send all my children to school this year and, most importantly, to get treatment for them when they are sick,” she says.

“The partnerships established between producer organizations, agribusiness purchasers, and financial institutions have enabled the PIDMA project to improve sorghum sector activity in the northern and Far North regions, in order to meet agribusiness needs and a significant share of the demand on the domestic agricultural market, while improving the livelihoods of local farmers,” notes Myriam Chaudron, World Bank Task Team Leader.

Between March 2016 and January 2017, about 2,000 metric tons of sorghum were cleaned and sold to Guinness for the sum of CFAF 392 million (about US$660,000), and the cooperative is beginning to enjoy some visibility in the sector at the regional, national, and international level.

In the near future, it plans to expand its membership and find new markets and new clients. “We are hoping to be able to diversify our activities and offer processed sorghum products, such as porridge, cake, or sorghum bread, or milk in three years’ time,” says Mariam, the cooperative’s chairwoman. “We’ll get there, with support from PIDMA and banks.”