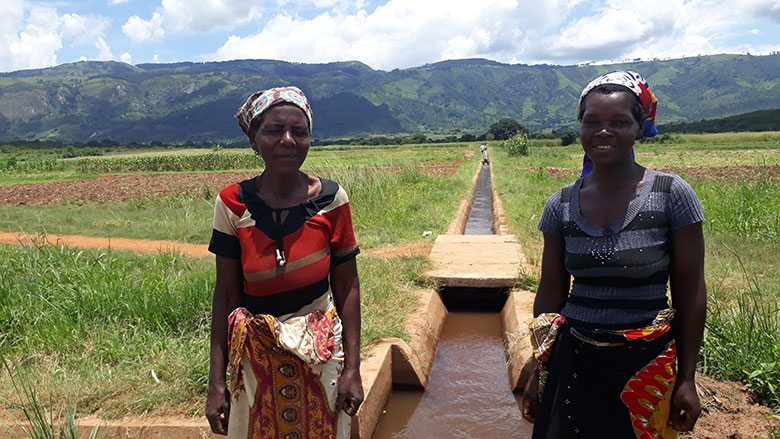 Irrigation systems restore life and hope among women farmers at the Mukai Kufa Ndaedza locality in the district of Bárue, Manica.

MAPUTO, March 29, 2017–Maize and rice hold a special place in the lives of many Mozambicans. As a food staple, many rural residents rely on these cereals as a primary source of daily intake of nutrients as well as to generate income. However, the prolonged droughts of recent years, coupled with nonexistent or poor irrigation systems and soil salinization, as well as the rising production costs, have long crippled many small farmers, the majority of which are women.

Recent developments have given farmers in central Mozambique good reason to be optimistic. For over five years the World Bank has supported the Government of Mozambique’s Sustainable Irrigation Development Project (PROIRRI), providing around $70 million in financing in addition to the $5.7 million allocated by the Government of Mozambique and a $14.2 million grant from the Japanese Government, bringing the project’s total investment to $90 million. The objective of the project is to increase agricultural production and raise farm productivity with new or improved irrigation schemes in the Provinces of Sofala, Manica and Zambezia in Mozambique. 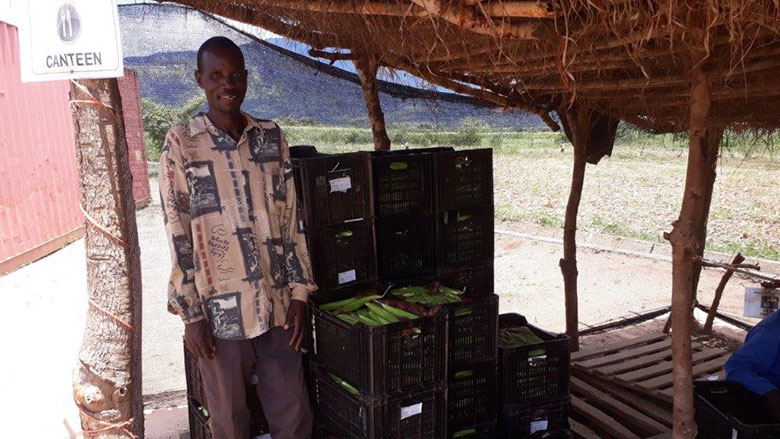 Isac Queface exhibits his highly marketable baby-corn production from his farm at Camp 4, in the District of Vanduzi.

Thanks to improvements in irrigation systems in the rural district of Vanduzi, in the Manica Province, local smallholder farmers are now growing maize and vegetable crops in irrigated land. Prior to the project’s investments, water collection was insufficient and could barely cover the needs of farmers, which drove some to abandon agriculture altogether and migrate to cities.

“Irrigation gives you control over water, and not the other way around. Water shouldn’t control you,” emphasized Isac Queface, the chairman of the local farmers’ association in what is known as Camp 4. “Today, people in our community consider the farming of baby corn and piri-piri as their new future, given their highly marketable characteristics,” he added. “We now live from our production.  I managed to build my brick house with four rooms. It’s only missing the roof, which will be built in the next couple of months,” he concluded while displaying a sample of baby corn production from his farm.

Thanks to PROIRRI interventions, the irrigated area in the Vanduzi fields has been expanded. Newly built canals use gravity to encourage a flow of water along the fields, covering 20 times the area initially irrigated. In the district of Vanduzi alone, the project built 11 of such irrigation schemes covering a total area of more than 1,500 hectares, which are used mainly for the production of vegetables and cereals.

Like in Vanduzi, Sussundenga is another district now flourishing thanks to new irrigation schemes.  Zabeta Jone, a 51-year-old farmer, who along with her husband are members of the Kufa Ndaedza farmers’ association, recalls how hard life was prior to PROIRRI interventions. They lived 7.5 kilometers from the valley where they had their farm. To get there they had to go around a mountain and cross an area infested with snakes, she recalls. Small farmers like her used a rudimentary irrigation method that couldn’t provide enough water for the family’s small plot of land. “Those were very difficult times,” she recalls. Like many farmers who benefited from investments under the project, the future looks much brighter to her.

“The project has considerably expanded irrigation in the valley and as a result, we have acquired three more plots of land,” said Jone. “The whole community has benefited. In higher parts of the valley, a new village was established and we immediately moved there. The increase in our income allowed us build our home with burned bricks, send our eldest son to university in the city of Chimoio, afford a driving license for our other son, and send our youngest to school,” added a radiant Jone with her husband proudly leaning on a brand new motorcycle.

In the neighboring provinces of Sofala and Zambézia, PROIRRI's focus is on rice production, a priority crop for the Government of Mozambique. The districts of Buzi, Mopeia, and Morrumbala are some of the biggest beneficiaries in the provinces receiving PROIRRI's ‘matching grant’. The grant funds 70% of the cost of acquiring production kits that cover a standard area of about 0.2 hectares, consisting of improved seeds, fertilizers, and pesticides. The remaining cost of 30% is covered by the farmers themselves. Likewise, the scheme co-funds 85% of the total cost of acquiring equipment for animal traction as well as agro-processing machines.

In the above mentioned provinces, the project is expected to ensure irrigation over a total of 3,000 hectares, are dedicated to rice production, 800 for horticulture, and 500 for contract production. So far, over 6,000 people have directly benefited from the project in the three provinces where it is implemented.

Mozambique is endowed with more than 30 million hectares of arable land with significant agro-ecological diversity. The government has named the development of irrigation as one of its priorities for the development of agriculture and rural development. To that end, it adopted a new National Irrigation Strategy whose implementation is materializing with the interventions such as those under the PROIRRI. Three out of 15 hydrogeological basins highlighted by the Irrigation Strategy (Buzi, Pungué and Zambezi) are covered by the PROIRRI intervention. Within the scope of the project, the National Irrigation Institute (INIR) benefited from institutional and capacity building to cater to its policy, strategic and operational mandates. INIR capacities to implement its policies were also reinforced. The project also supported government institutions in the preparation of legislation for irrigation associations as well as the National Irrigation Plan, both approved by the Executive’s Council of Ministers in 2015 and December 2016 respectively.