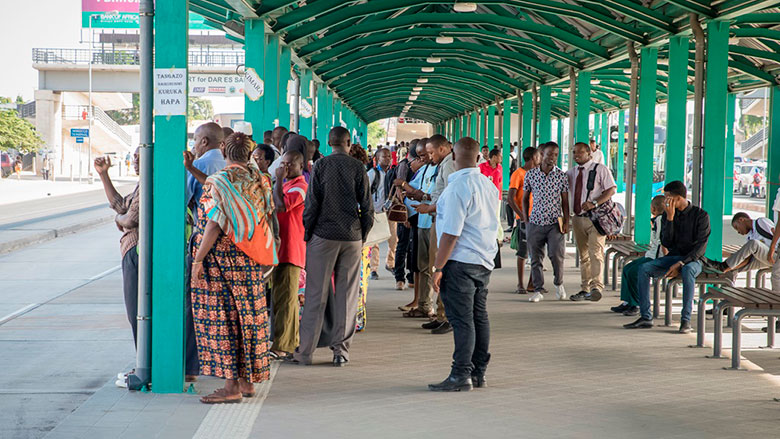 Passengers wait for the next Bus Rapid Transit (BRT) bus at a terminal in Dar es Salaam. Since starting operations in May 2016, BRT ridership has increased to 150,000 people per day.

DAR ES SALAAM – About half a kilometer down from the Kimara terminal of the Dar es Salaam Bus Rapid Transit (BRT), a plot of land that lay empty and dusty this time last year is teeming with cars today.

Commuters who live Mbezi, Kibamba, Goba, and as far as Kibaha, park their vehicles there each morning, catch a BRT bus at Kimara to take them to the Dar es Salaam city center.

“Our father was a motor vehicle mechanic and he operated a small garage here on these grounds,” said Juma Kassim, fifth born of the late Kassim Mwamba’s 11 children. “He taught all of us his trade as we never managed to get secondary education.”

Juma, who is in charge of the parking lot, said that hardly three months after Dar es Salaam Bus Rapid Transit operations started, motorists started stopping by and asking if they could leave their cars there for the day and pick them up in the evening.

“Our customers arrive as early as six in the morning, park their cars and return to pick them after work. We allow them up to nine p.m. only,” he said.

As the vehicle owners started requesting to also have their cars washed, the young men in the area got busy while petty traders and food vendors also set up shop nearby.

“We charge Sh2,000 to wash a car,” says Karim Kassim, younger brother to Juma. “Since we are skilled mechanics, we also fix cars on request if they are having problems or service them. We are very busy.”

The construction of the BRT, which was completed in 2015, was financed in part by a from $290 million credit from the International Development Association, the World Bank’s fund for the poorest countries. Support for the BRT project was provided under the Second Central Transport Corridor Project.

Dar es Salaam is considered one of the fastest growing urban centers in the region, with a population that has been growing rapidly at a rate of 6.5%, up from 2.5 million inhabitants in 2002 to 4.4 million in 2012. It is projected that the population could reach 10 million by 2027, thus attaining ‘mega city’ status.

But this growth has come with challenges, such as traffic congestion, whose costs have been disproportionately high. World Bank estimates show that residents of Dar es Salaam spend approximately 34% of their average monthly incomes on transportation, limiting resources, including time, for productive work.

“Studies had shown that about 60% of trips made daily in Dar es Salaam are by commuter buses (daladalas), 14-15% by private cars and the remainder by other means including walking,” said Yonas E. Mchomvu, World Bank senior transport specialist and task team leader. “Private cars however occupy the most space on the road, yet they carry few people, sometimes only the driver. With a conducive mass transit system, it was expected that such private car owners would be motivated to leave their vehicles at home.”

This is exactly the impact the BRT is having on people such as Ibrahim Mwalafyale, who lives 8km from the Kimera Terminal in Mbezi-Makabe.

“My transport budget has been reduced by more than 70 percent,” said Mwalafyale.

With a wife and two children attending primary school, Mwalafyale used to drive his six-cylinder Toyota Brevis salon car a distance of 29km from Makabe to the Central Business District where he works as an accountant. He spent Sh25,000 each day, including Sh2,700 for city parking for nine hours.

“We now drive for only the 8kms from Makabe to this lot and then we hop onto a BRT bus and 45 minutes later, my two boys are in school, my wife is at work and I am at my desk, all for Sh2,700 a day including parking fees,” he said.

“The increase in ridership has been quite rapid as people appreciate how much more convenient it is to uses the buses instead of private cars,” said Ronald Lwakatare, the chief executive of the DART Agency under the Prime Minister’s Office that oversees the private operator. “The buses are faster but the system is also having an impact on congestion because as more people drop their cars, the mixed lanes are also visibly less congested even at peak hour.”

Although city law required students to travel at a minimal fare in the daladalas, the privately owned buses that provide public transportation around urban centers, they were nevertheless always sidelined and had to wait till the full-fare paying passengers secured places then they would squeeze in.

“With the rapid transit buses, students pay the same subsidized rate as always but they can now be assured of traveling in comfort and getting to school on time,” said Lwakatare. “The buses are also accessible for people with disabilities and the elderly and passengers are very enlightened on their designated seats.”

While the BRT’s project development objective was to support Tanzania’s economic growth through reliable and cost effective transportation, it was also anticipated that the BRT would also become a catalyst for business and investments around the BRT terminals and other previously inaccessible areas, creating jobs and increasing tax revenues. At a micro-level, the  Mwamba family parking lot is one example of where this appears to be happening..

“We charge Sh1,000 per car for parking,” Juma said. “The grounds have the capacity to hold up to 90 cars and we are always full.”