Leaders Step Up To Double the Wave on Carbon Pricing 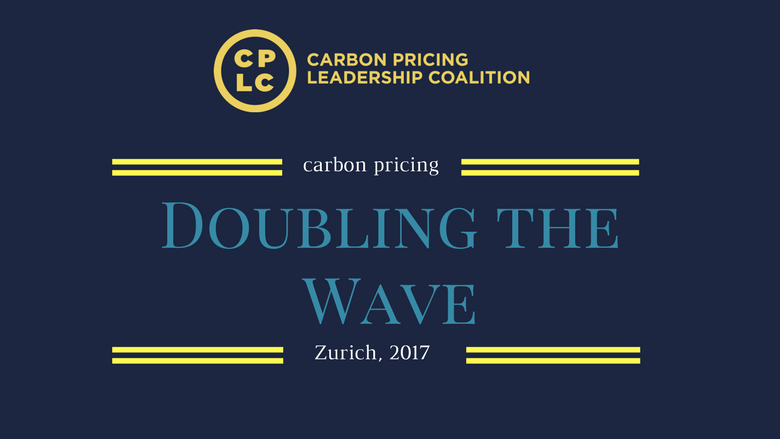 As businesses and governments aim to make good on the promise of the Paris Agreement, which sets the globe on a path to stabilize temperature rise at or below 2 degrees Celsius, . Last April, heads of state and business leaders set a global goal to double the coverage of emissions subject to carbon pricing by 2020, and double it again within the next decade. To showcase leaders and inspire further progress, the Carbon Pricing Leadership Coalition (CPLC) and the Netherlands hosted a high-level dialogue in Zurich to help achieve these goals and uncover challenges ahead on the eve of the World Economic Forum’s Annual Meeting in Davos.

A number of leaders stepped up to the challenge. From the private sector, Infosys, a global leader in consulting and technology announced a new internal carbon price of $10.50 per ton of CO2; consultancy Ecofys announced that they will become the CPLC’s newest Partner; and The Dutch Ministry of Infrastructure and the Environment committed an additional 1.9M Euro to support the CPLC’s broad objective to achieve a meaningful price on carbon in key economies.

The final announcement came from the global environmental disclosure leader CDP as they launched the Carbon Pricing Corridors initiative: the world’s first industry-led initiative aimed at defining the carbon prices needed for industry to meet the Paris Agreement. CDP, on behalf of the We Mean Business Coalition, is kicking off the Corridors initiative by convening a group of leading energy utilities and investment leaders from across the G20 to shape forward-looking scenarios on carbon prices.  This will help companies and investors manage the risks and also seize the opportunities of decarbonizing electricity generation.

During the first Leadership Conversation: Carbon Pricing in the Halls of Government, Jos Delbeke, Director-General for Climate Action, European Commission was joined by Glen Murray, Environment & Climate Change Minister, Ontario Province and Sharon Dijksma, Minister for Environment of the Netherlands. These government leaders stressed the urgency of acting to address climate change and noted the need to accelerate carbon pricing implementation to meet the objectives of the Paris Agreement. They also, recognizing there is no-one size fits all approach to carbon pricing, highlighted the importance of having more focused discussions among business and government concerning  the potential alignment of the over 60 carbon pricing systems that currently exist—this will deliver increased efficiency and cost savings. On the issue of carbon pricing revenues, these are already being used by a number of governments to help ease the transition of jobs and revenue from higher-emitting to cleaner sectors and the panel concluded that the CPLC could help to share these experiences more broadly.

The afternoon Leadership Conversation discussed Carbon Pricing in the Boardroom and featured Ben Van Beurden, CEO of Shell, Samir Assaf, CEO Global Banking & Markets, HSBC and Geraldine Matchett, Chief Financial Officer of Royal DSM.  These businesses echoed concerns about the urgency of action to address climate change and called for governments to place a meaningful price on carbon.  DSM and Shell already risk assess their projects with an internal carbon screening value, but felt that stronger and faster government action would allow them to better plan for future investments.

Concerning how to keep carbon pricing integrated into everyday business and present in boardroom discussions, HSBC presented several methods it has pursued, including putting climate metrics into senior management’s scorecards and setting up a Climate Business Council and dedicated Sustainable Financing Unit. HSBC also strongly endorsed the new Financial Stability Board Task Force on Climate-Related Financial Disclosure (TCFD) report, calling on businesses to adopt recommendations such as incorporating a 2-degree scenario into their strategy and to use a carbon price as one of the metrics and tools to guide their future growth.

In addition to the Leadership Conversations, five interactive sessions offered updates on carbon pricing activities in China and Canada, along with conversations on the benefits and methods for linking carbon pricing systems, use of carbon pricing within companies, and the role of financial institutions in helping clients to manage climate risk while unlocking investment opportunity.

The CPLC has a clear path forward to help address the challenges outlined by participants in 2017. Key work areas for the coming year include bringing trade policy and climate policy together to address competitiveness concerns; enhancing public outreach and awareness by telling stories about the aims and benefits of carbon pricing; bringing new voices into the discussion by engaging more actors from emerging markets and in sectors not conversant with carbon pricing.  Finally, the CPLC will work with CDP to bring together investors and businesses to consider how best to respond to the TCFD recommendations by pricing carbon in their activities and portfolios.

These messages and ideas will be shared with business leaders in Davos later this week, as the World Economic Forum works to expand climate leadership by leading companies. The