A New Strategy to Support Growth and Stability in Afghanistan 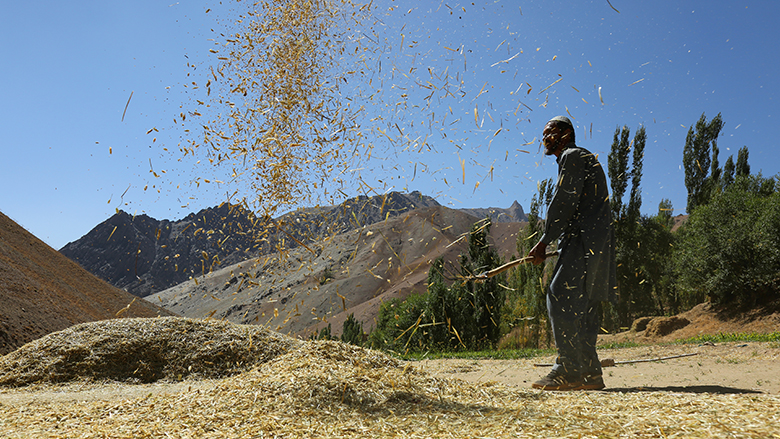 Agriculture accounts for 56 percent of employment in Afghanistan and sector growth plays a key role in poverty reduction.

The World Bank Group’s strategy to support Afghanistan is set out in the Country Partnership Framework (CPF).  It supports the Government of Afghanistan’s strategic vision and goal to reduce poverty, outlined in the Afghanistan National Peace and Development Framework.

The CPF comes at a critical juncture as the current government seeks to build on important achievements in the first two years of its term, but is faced with a range of challenges from growing insecurity to stagnating growth and rising levels of poverty.

The CPF covers a four-year period, from 2017 to 2020, and sets out a medium-term strategic framework that is intended to be flexible and responsive to the rapidly evolving situation in Afghanistan.

" We know that 39 percent of Afghans live in poverty and the country needs to create jobs for the nearly 400,000 people entering the labor market each year. The situation is exacerbated by the increasing numbers of returnees (5.8 million refugees) and internally displaced people (1.2 million). "

The CPF addresses cross-cutting issues in its design and implementation. It seeks to improve governance through building a more responsive, capable, and accountable state. Tackling corruption is an important area of governance and is addressed in each of the three pillars of the framework.

In recognition of climate-related shocks that affect in particular Afghanistan’s poorest citizens, the CPF includes, for the first time, explicit measures to increase resilience to climate variability and change, such as planned energy engagements with a focus on sustainable renewables to tackle climate change, and to develop capacity for early warning and response to natural disasters.

The CPF also addresses directly the need for greater social and economic inclusion to ensure an equal and just society. The framework will support development of a platform on gender and social inclusion to help the government promote gender equality.

The International Development Association (IDA), the World Bank Group’s fund for the poorest countries and the Afghanistan Reconstruction Trust Fund (ARTF) resources underpin the Bank Group’s long-term engagement and commitment to Afghanistan. Annual IDA and ARTF commitments to Afghanistan have been around $200 million and $900 million, respectively. IDA allocations are expected to be increased in Afghanistan and other fragile and conflict-affected countries. The additional funds available will provide the necessary flexibility for the Bank to respond to new priorities fully aligned with the strategy, such as additional support in education and health service delivery, expansion of social safety nets, and urban development.

The International Finance Corporation (IFC), the World Bank Group’s private sector arm, aims to expand its commitments in Afghanistan from its current portfolio of $54 million to a cumulative investment of about $80 million over the CPF period. The Multilateral Investment Guarantee Agency (MIGA), the Bank Group’s political risk insurance arm, stands ready to provide additional support with a focus in the finance, manufacturing, agribusiness and services, and infrastructure sectors.

The preparation of the CPF was guided by the learning experiences of the Interim Strategic Notes that formed the basis of past Bank Group support, as well as reviews from ARTF and independent evaluation groups. In addition, the CPF was guided by the Systemic Country Diagnostics (SCD) that was finalized in February 2016. The SCD was conducted before the CPF to inform strategic discussions about priority areas for the World Bank Group’s future support to Afghanistan. During CPF development, consultations were held with a broad spectrum of stakeholders, including international donors, nongovernmental organizations and civil society, and the private sector.

The two principal risks to the CPF program are the intensifying conflict and political instability. The CPF fully acknowledges these risks and the strategy and program it lays out is intended to mitigate their impact.