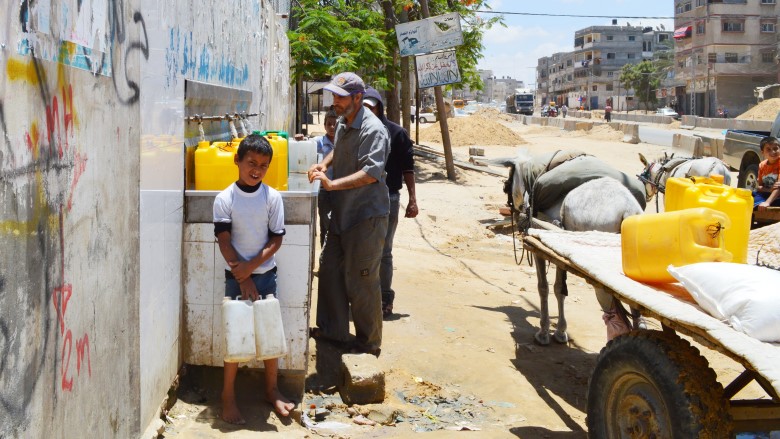 Ahmad Dalloul | Palestinian Water Authority
People will need water, already scarce in the Middle East & North Africa, even more desperately if temperatures rise because of climate change. In Palestine, water resources are critically scarce, and the situation in Gaza is alarming.

Adnan Ghosheh, Senior Water & Sanitation Specialist, remembers a time not so long ago when everyone in Gaza could drink water from their tap. That was in the late 1990s, but so much water has been pumped out of the natural aquifer underneath Gaza since then that seawater has seeped in, making it too salty to drink. These and other factors mean that only 10% of Gaza’s population has access to safe drinking water, compared to 90% in the West Bank or about 85% in MENA in general.

What danger does the drop in the level of the aquifer pose?

Raw or poorly treated wastewater, which comes from densely populated areas and refugee camps in Gaza, infiltrates the aquifer or goes to the Mediterranean. As a result, you have a shortage of water coupled with high demand, given the high growth of population now close to two-million.

So there are issues both with the quality of water and the quantity of water, both are making access to improved drinking water very low. As such, people in Gaza are not able to use the water coming into their houses for drinking; they use it for household ends, but for drinking, they have to rely on trucks. There are some 150 operators who provide some kind of desalinated water that has been filtered to make it acceptable for drinking and for cooking. It’s more expensive and not an improved source of water, according to our definitions of water clean enough to drink.

Q. What other sources of water can possibly be considered?

In the past, Israel used to deliver good quantities of water, but the demand has increased with the population growth, and the volume of freshwater provided by Israel under the 1993 Oslo Accords falls far short of what it needs now. So the quantities from the aquifer and Israel are simply not sufficient for Gaza, although this issue had been raised by numerous studies. There were ideas to build a desalination plant, to import water from Egypt or from Israel—transboundary water—and now the Palestinian Water Authority (PWA) is pushing for a central desalination plan with the support of the World Bank. Strengthening the capacity in the Palestinian water institutions to sustainably manage the sector and build such complex infrastructure is being taken into consideration as part of another Bank’s project.

At the end of the day, people need water. We, at the World Bank, do development, however, our work in Gaza has also a humanitarian nature because water is a basic need.

Q. What is the Bank’s approach to helping address the water crisis?

The World Bank is working closely with the Palestinian Authority in line with its strategic water framework. We are interested in developing infrastructure but also in having the institutional capacities in place to enable the government to sustain it. This is a challenging task.

The PWA and its stakeholders have developed their water strategy for 2017–22. Under this strategy, one of the main objectives is to develop desalination plants as unconventional sources of drinking water because the wells are depleted. They couple this with efficiency measures, so there are less water losses in the system, particularly in Gaza where, due to different conflicts, the infrastructure has been damaged and there are a lot of leaks: we have had projects working on ensuring that services were restored and leaks were detected and fixed.

So, the priority is to secure resources and supply, and of course improve wastewater management. We have a wastewater treatment project in North Gaza, one of the oldest projects on the World Bank’s books. It started as an emergency response project, but is currently working on a long term solution where the treated water will be used for irrigation, saving potable water for drinking and other uses.

Q. What about governance issues?

The PWA water strategy includes an institutional and financial objective to ensure economic viability and sustainability. And this is probably the biggest challenge in Gaza, where the governance system is not fully intact, and people cannot afford to pay for water services.

We understand that there are limitations: there are matters that are within the control of the Palestinian Authority, and others that are not. Getting water from Israel, as well as material and experts into Gaza are beyond its control. We try to intervene on a technical level to ensure services are delivered. In our wastewater treatment project in North Gaza, we finally got approval from the government of Israel for a dedicated power line to operate the treatment plant, a request that was submitted three years ago.

Everyone agrees that environment does not have boundaries, so when a waste water treatment plant is developed, this will serve the interest of all parties because otherwise the wastewater is going to flow to the other side. It’s a mutual interest on the Palestinian side but also on the Israeli side. Addressing this necessity is therefore not a luxury.

Q. How quickly has this water crisis happened?

The issue became more acute about 15 years ago, when water supply and availability quickly deteriorated. This water crisis has already led inhabitants to leave Gaza. If we start implementing the measures to secure the water supply and improve water management, the aquifer would clean and replenish itself. But, if by the year 2020, those measures are not in place—if the 55 m3 of water a year from the desalination plant is not coming to replace the water being taken out, if the waste water plants are not built—we will basically have an irreversible process.

Q. What about other areas of Palestine?

In the West Bank, there is also a challenge of access to water. There are some areas where the daily water consumption per person is of 25–30 liters while the World Health Organization recommends 120 liters per capita per day, mainly because inhabitants of the West Bank are not getting enough water from the supplier. The bulk supplier is Palestinian, but much of the resources in the West Bank are controlled by Israel. The demand is particularly acute in summer time: in Hebron, the municipality is able to deliver water only once every 21 days, and this is generating discontent among the population who are less willing to pay for such poor service. Despite the challenging circumstances, we believe that Palestinians, like any other nation, are entitled to adequate water and sanitation.