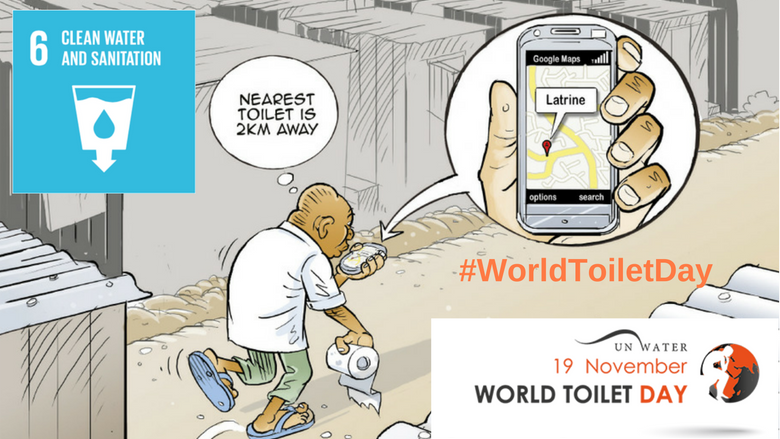 November 19 is World Toilet Day, a day to raise awareness and inspire action to tackle the global sanitation challenge – a topic often neglected and shrouded in taboos.

Today, 2.4 billion people are struggling to stay well, keep their children alive and work their way to a better future – all for want of a toilet.

Seven out of 10 people who still lack access to safe, hygienic toilet facilities live in rural areas, mostly in Sub-Saharan Africa and South Asia. However, . The increasingly rapid pace of urbanization, combined with evidence showing great health impacts of poor sanitation in dense urban areas, makes this a key barrier to sustainable development.

This has serious public health impacts, as well as long-term impacts on human capital. Just last week estimates were released suggesting that .

. The world missed the MDG target for sanitation by almost 700 million people.

The Sustainable Development Goals (SDGs), launched in 2015, include a target (SDG 6.2) to achieve access to adequate and equitable sanitation and hygiene for all and end open defecation by 2030, paying special attention to the needs of women and girls and those in vulnerable situations.

To step up efforts to achieve sanitation for all by 2030, the World Bank Group is aligning its efforts around five priority themes.

Sustainability - Focusing on the multiple facets of sustainability (including social, environmental, financial, and economic sustainability) to ensure that results are sustained into the future. Although access to sanitation services has improved during the MDG era, many countries struggle to maintain services – often as a result of weak institutions and poor resource planning. In addition, poor sanitation leads to pollution of shallow groundwater sources, thereby polluting water supplies for many low income communities.

Inclusion – Supporting more inclusive approaches to provide sanitation to the poorest, the most remote, and the most marginalized and those in rapidly expanding peri-urban areas. The challenge of urban sanitation is particularly acute as it requires changing mindsets towards a balanced mix of sewered and non-sewered solutions, creating new institutional arrangements at the interface between municipalities, utilities and private providers, inducing behavior change at the household level, and developing new financing paradigms to channel capital and operational subsidies.

Financing – Broadening the financing mix to allow for more rapid expansion of sanitation facilities. This includes mobilizing more concessional funds where possible and, at the same time, improving the performance of service providers, making it easier for them to access to commercial finance.  Supporting expansion of microfinance, particularly in rural areas, so that households can borrow to make investments in toilets. Incentivizing the use of cost effective solutions and, finally, encouraging better targeting of limited public funds to provide best returns for communities.

Resilience – Supporting the development of a clear strategy for influencing water, sanitation and hygiene policy, shaping investments, and recommending solutions to countries, to fill the global knowledge gap in how to build climate resilient water supply and sanitation services.

In Lao PDR, the Community-Led Total Sanitation (CLTS) approach, combined with sanitation marketing tools, led to a 32% increase in sanitation access in 266 villages, eight times faster than the national rural average of 2.6% per year from 2014 to 2016. Through this support, 113 villages were declared open defecation free and almost 40,000 people gained access.

In Haiti, the National Direction of Water and Sanitation (DINEPA) launched a roadmap to raise awareness and encourage households to build or improve their own latrines. As part of this strategy, DINEPA doesn’t grant any direct subsidies to households for buying a toilet; instead, it provides them with consulting ser vices for the construction of latrines.

In India, a US$1.5 billion World Bank loan is supporting the Government of India’s Swachh Bharat Mission in its efforts to ensure that all citizens in rural areas have access to improved sanitation with the goal of ending the practice of open defecation in the country by 2019. The program incentivizes latrine and toilet construction through a focus on changing behaviors and stimulating demand.

In Egypt, the US$550 million Sustainable Rural Sanitation Services Program for Results is enhancing access to sanitation services for poor people in small towns while addressing the pollution of the Nile from untreated sewage. The Program aims at empowering local service delivery and connecting the rural and small town poor to working sanitation systems in the Delta governorates of Daqahliya, Sharqiya, and Beheira in Lower Egypt.

In Mozambique, at the request of the Maputo Municipal Council, inclusive sanitation options have been identified for households not connected to the limited sewerage system. This pilot has led to a request for World Bank financing for urban sanitation projects which will promote sustainable solutions to on-site sanitation. Projects which similarly address the challenges of on-site sanitation at scale are either under implementation or preparation in Ghana, Bangladesh, Benin, Tanzania, Indonesia and Ethiopia, among other countries.

In Bangladesh – As part of a broader technical assistance program, the Water and Sanitation Program is working with leading microfinance institutions to develop specialized sanitation loan products. These can help the many households in rural Bangladesh which do not have sufficient cash on hand to upgrade to improved sanitation, but can afford the cost if they are able to spread it over time. Following initial successes, the approach is now being expanded through a US$3 million GPOBA grant.

Together with civil society organizations like Global Citizen, the UN, and others in the development community, the World Bank Group supports efforts to advocate for high level political attention to ensure sanitation is prioritized in a way that ensures the SDGs are met. This World Toilet Day, over 100,000 people are gathering in person at the MMRDA Grounds in Mumbai for the first-ever Global Citizen Festival in India, with an incredible lineup of international and Indian headliners including Jay Z, Coldplay and the Bollywood star Aamir Khan, to mobilize social change in sanitation, clean water, education and gender equality. Follow @WorldBankWater for the latest updates on sanitation campaigns around #WorldToiletDay.