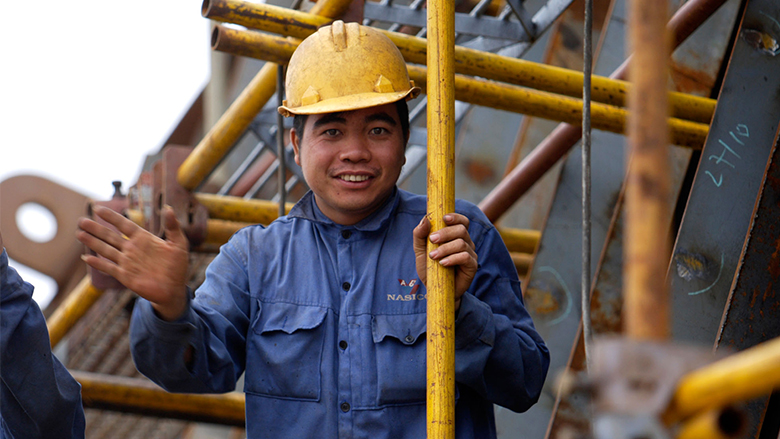 Workers start their day at 6 am at the construction site of the 460-meter-high skyscraper in Ho Chi Minh City, which is set to become the tallest building in Vietnam once completed.

Vietnam is growing and growing fast. In the last 30 years, Vietnam has become one of the world’s great development success stories, rising from the ranks of the poorest countries. On the strength of a nearly 7% average growth rate and targeted government policies.

Rodrigo Cabral works with the World Bank Treasury’s Government Debt and Risk Management (GDRM) program. He points out that Vietnam’s fiscal needs have been changing as Vietnam leaves the ranks of low-income countries and becomes a middle-income country. As one of the chief advisors of the revised law on public debt management, Cabral added that “growing means facing investment needs: investment in infrastructure and investment in social programs,” and stressed that these needs require government financing.

Vietnam is moving towards a market-based public debt management environment. On the one hand, funding is becoming more costly as the purely concessional loans from multilateral development banks such as the World Bank or the Asian Development Bank become less likely. On the other hand, this opens up a wide range of borrowing choices and financial instruments, which provide wider options for balancing the cost/risk trade-offs in the public debt portfolio.

In 2009, a new public debt management law was enacted. In Vietnam, every new law is formally assessed at the end of the first five years. Vietnamese authorities recognized the essential need for a more robust legal and operational framework for public debt management in light of its economic transition and started working on the “Five Year Revision of the Public Debt Law.” In 2015, the authorities expressed a desire to work with the World Bank to revise the law. 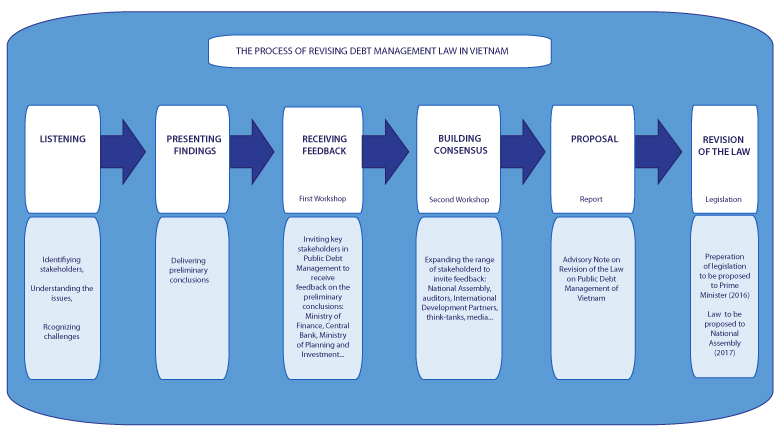 Revision of the Public Debt Law: a tailor-made multi-pronged approach

Vietnam and the World Bank joined forces to improve the Public Debt Law.

The World Bank Government Debt and Risk Management (GDRM) Program team, known for the creative and practical approach they bring to solving problems, orchestrated the right mix of international and national consultancy inputs, access to global knowledge using the Bank’s network, and hands-on technical knowledge of Bank staff who are based in the field.

1.       International Expertise in Sound Practice in Debt Management: The first resource the GDRM team tapped was the consolidated experience of other countries that faced the same problem years ago, and now have sound legal frameworks. International experts presented the cases of three countries in detail. They also shared world-wide best practices in public debt management legal frameworks.

2.       Close Engagement and Insights from Country Office: The GDRM team sought timely support from the World Bank country team for continued policy dialogue with high-level counterparts. With local insights on the technical and political challenges to reform, the team worked closely with the government’s reform champions to define the most impactful ways to contribute throughout the consultation and consensus building processes.

3.       Local Expertise in Public Debt Management: Local consultants familiar with the Vietnamese public debt management system, who encapsulated the institutional memory, analyzed past challenges in enacting the 2009 law and what worked at that time.

4.       Local Expertise in Legislation: Finally, the GDRM team introduced local experts, to advise on the links with other pieces of local legislation: the constitution, budget law, and other particularities of the legal framework in Vietnam as a whole.

“One key characteristic of reform in Vietnam is the importance of building consensus. Various stakeholders from different institutions have diverse views based on their background. No simple top-down approach would work unless consensus is built among multiple players in public debt management in the executive branches, the legislature, think-tank, the media and the public” explained Quyen Vu, World Bank Senior Economist and leader of the advisory team.

Result: A comprehensive advisory note for the revision to the debt management law

The Vietnamese authorities and GDRM advisory team identified key stakeholders and involved them in the revision process, through missions and workshops, inviting feedback and building consensus.  This is the intermediate output that, together with the on-going discussions within the government, will generate a proposal for amendments and ultimately a new debt management law.

The approval of the new law will generate the real outcome: a robust legal framework that supports efficient debt management and provides a foundation for investment.