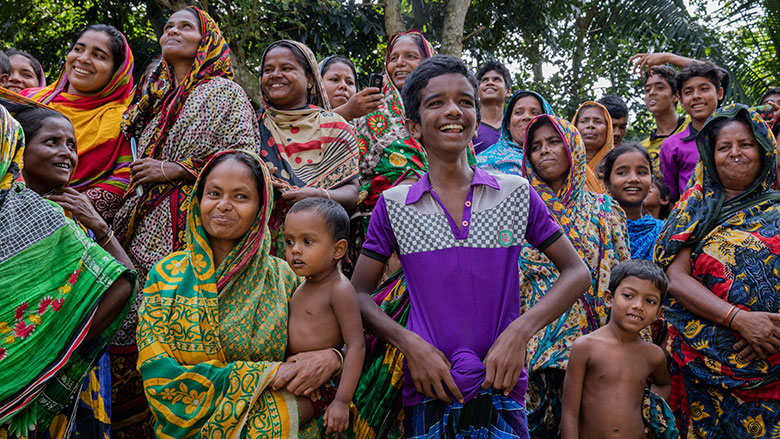 What will it take to end poverty? Many of the answers may come from Bangladesh.

Once considered one of the poorest countries in the world, Bangladesh is a rising lower middle-income country, where poverty has fallen dramatically over the last generation, with innovation driving change.

Signs of progress are everywhere, from modern factories and technology innovations such as solar-powered irrigation, to the hope and ambition of garment factory trainees moving to Dhaka from the poorest parts of the country.

World Bank Group
" Poverty is removable if you are sincere, if you have a multi-pronged attack on poverty, and you have commitment. Commitment is the most important thing – commitment to the elimination of poverty. That, we had. "

Bangladesh helped 20 million people lift themselves out of poverty in two decades and cut the poverty rate from 44.2 percent in 1991 to 18.5 percent in 2010. Poverty has probably fallen even lower: Current World Bank projections estimate it at 13.8 percent in 2015.

The number of women in the workforce has doubled while the birth rate has tumbled from 6.2 births per woman in 1990, to just 2.2 today. About 40 percent fewer women died in childbirth in 2015 than in 2001. The number of children dying before their fifth birthday dropped by two-thirds between 1990 and 2013.

The country’s surging garment industry is now second only to China in the readymade garment sector. And this has been accomplished even as population density and an over-abundance of water restrict the amount of land available for industry.

How did Bangladesh accomplish these milestones?

“Poverty is removable if you are sincere, if you have a multi-pronged attack on poverty, and you have commitment,” Bangladesh Finance Minister Abul Maal Abdul Muhith said in an interview. “Commitment is the most important thing – commitment to the elimination of poverty. That, we had.”

Nearly a half-century ago, this progress did not seem possible. The war for independence, which ended in 1971, claimed 3 million lives, destroyed two-thirds of the economy, and left 70 percent of the new country’s population in poverty.

“We were a backwater,” said Hossain Zillur Rahman, founder of the Dhaka-based think-tank Power and Participation Research Centre (PPRC).

But the quest for independence also helped “transform our psyche to make our people more aspirational, more self-assertive,” Rahman said.

“Bangladesh used to be a land of cows and plows. Now, tractors you can find even in the remotest villages. Illiterate peasants, embracing technology – that’s because of aspiration. The farmers decided, I may have been born poor, but not my children,” Rahman said.

Muhith said national character has played a role in Bangladesh’s progress – in particular, a sense of social equality that has helped empower women, for example.

National programs in education, health and social security have also done their part to lift people out of poverty, he added.

“You must educate all your people,’’ Muhith said. “Today we cover, at the primary education stage, roughly 99 percent. In the secondary stage it is not that good yet, but not so bad, because it used to be 29 percent, and now it is more than 60 percent.”

The country has also set an example in its ability to be pragmatic and practical, to set interim goals and take one step at a time, Rahman said. “All our innovations have been grassroots oriented, delivery focused”.

Another important factor in the development of Bangladesh has been “feeder roads” – roads that connect villages to the next town. Rahman described them as a “transformational catalyst” for Bangladesh, because they allowed people to travel, and, for example, go abroad and send home remittances – in 2015, about 7.7 percent of GDP.

“Remoteness is as painful as poverty,” he said. ”Girls going to school, microcredit, women selling their goods in the market. These would not have been possible if remoteness continued to be a problem.”

World Bank Group has provided nearly $24 billion to date for initiatives to reduce poverty in Bangladesh as the country has grown and developed over the years. The Bank has supported critical programs in health, education, disaster risk reduction, agriculture, and climate resilience.

Challenges remain, including the need to address rapid urban expansion, lower childhood stunting levels, and extend electricity access to everyone.

Asked about the goal, he smiled and said, “I have no doubt that poverty will not be here in this country by 2024.”