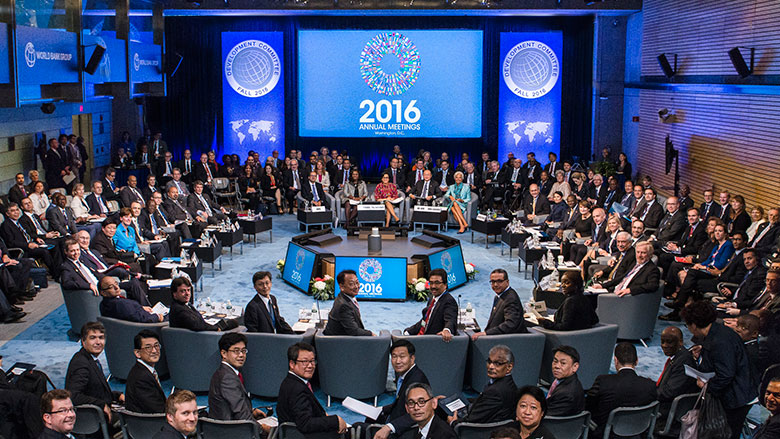 The World Bank Group must become “better, stronger, and more agile” to confront major global challenges over the next 15 years, while also working to end extreme poverty, boost shared prosperity, and achieve the Sustainable Development Goals and the Paris Climate Change Agreement.

That was a key message of the Development Committee, a ministerial-level forum of the World Bank Group and the International Monetary Fund, in a communiqué released at the close of the institutions’ Annual Meetings.

The committee representing the Bank Group’s 189 member countries said the global development landscape will face “critical shifts” in the future, driven by climate change, natural disasters, pandemics, migration, and fragility, conflict and violence, urbanization and demographic changes. Addressing these changes will require more collaboration with others and more resources, it said.

Acknowledging an environment of “sluggish” global economic growth and geopolitical and economic uncertainties, the committee also called on the Bank Group and the International Monetary Fund (IMF) to work with countries to “enhance synergy among monetary, fiscal and structural reform policies, stimulate growth, create jobs, and strengthen the gains from multilateralism for all.”

The committee’s message capped two days of meetings of the Bank and IMF shareholders – including most of the world’s countries. Ahead of the meetings, the Bank Group released a flagship report on poverty, shared prosperity, and inequality, and World Bank Group President Jim Yong Kim outlined his vision to accelerate development and the fight against poverty for his second term in a speech at the Brookings Institution.

Kim said the Bank is increasingly involved in development challenges beyond its traditional mandate, including major new initiatives to address the refugee crisis, climate change, and the threat of pandemics.

Challenges, he said, include technological change and the automation of work, which could impact jobs and the ability of developing countries to compete globally. By 2030, it’s projected that almost half of the world’s poor will live in countries affected by fragility and conflict. Emerging markets and low-income countries currently face an annual infrastructure financing gap of up to $1.5 trillion, said Kim.

He asked member countries at the Annual Meeting plenary session to give the Bank flexibility to “solve the most important problems and make sure we have the financial capacity to change the world for the poorest and the most marginalized.”

Over the last 70 years, the World Bank has been able to leverage $15 billion in paid-in capital to provide $600 billion in loans, and so increase the amount of assistance available to developing countries. The Bank Group’s private sector focused arm, IFC, leverages its capital 20 times, and the Multilateral Investment Guarantee Association (MIGA) leverages its shareholder equity 39 times, according to a paper on the Bank’s “forward look,” submitted to the Development Committee.

The committee said that it would consider options to strengthen the financial position of the Bank no later than the 2017 Annual Meetings October 13-15, 2017, in Washington.

It urged the Bank Group to “help create markets, particularly in the most challenging environments, and to mobilize private resources, including through guarantees, especially for quality infrastructure, and for small and medium enterprises.”

Kim, who was appointed last month to a second term as president of the Bank, outlined a plan to accelerate inclusive and sustainable economic growth, increase investments in human capital, and foster resilience to global shocks and threats.

“I want you to know that going forward, we will be much more aggressive in putting on the table, capital and specific instruments that can reduce risk.  In doing so, we feel that we can create new markets and encourage investors to venture into countries and projects that they never would have considered before,” Kim said at Brookings

The Development Committee welcomed a plan to increase the financing capacity of the World Bank’s fund for the poorest countries, the International Development Association, also known as IDA. “We advocate for a strong IDA18 replenishment, with a broadened donor base. We welcome the innovative financing and policy package, including the proposal to enable IDA, which has recently received milestone triple-A ratings, to tap into capital markets to complement its resources.”

More than half the world’s poor live in countries affected by fragility, conflict, and violence, where IDA support is particularly important, it added.

The Development Committee also asked the Bank and IMF to help countries access finance for adaption to climate change, as well as mitigation and improved disaster risk management.

It urged the Bank to “focus on building resilience while expanding insurance schemes and increasing investments in climate-smart land use, green infrastructure, and sustainable cities.”  Kim announced assistance for Haiti during the Meetings to respond to damage from Hurricane Matthew, as well as $20 million from the Caribbean Catastrophe Risk Insurance Facility, developed with assistance of the World Bank.