Brazil can Respond to the Economic Crisis without Ravaging the Environment 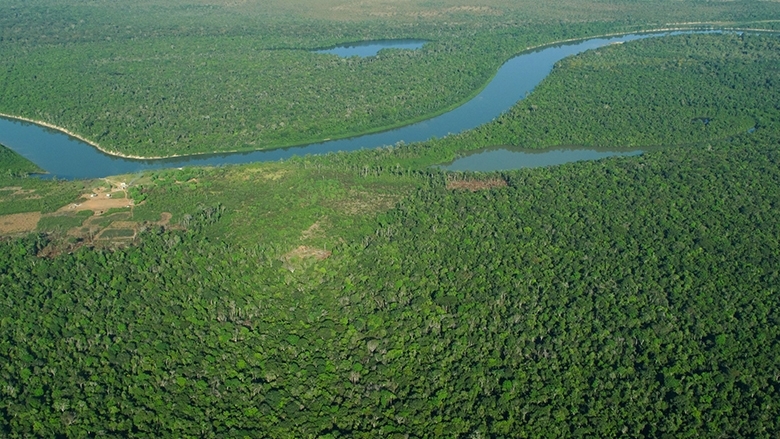 An aerial view of the Amazon

Did you know that in the last 10 years, Brazil has: cut its greenhouse gas emissions in half (the only major global economy to do so), reduced deforestation in the Amazon by 82%, started several programs to restore forests, passed important land use regulations (such as the Forest Code) and led the global discussion on climate and the environment?

All these achievements are acknowledged and discussed in the new Systematic Country Diagnostic (SCD), a study that kicks off the World Bank's new partnership strategy with Brazil for the next four years. The paper lists several of the country's key policies for building a green development model for the planet.

“These advances result from concerted work on all levels of government in Brazil since Rio-92," states Gregor Wolf, head of the World Bank's sustainable development program in Brazil.

These efforts include, among others, policies to increase the number of protected areas, improved inspections (for instance, by using satellites) and economic incentives put in place for communities to explore forests sustainably. One example of a structuring public policy program was the Action Plan for the Prevention and Control of Deforestation in the Legal Amazon (PPCDAm), introduced in 2004.

This work also entails creating and strengthening institutions like the Brazilian Forest Service (created in 2006) and the Chico Mendes Institute for Biodiversity Conservation (ICMBio), founded in the following year. The former is tasked with managing Brazilian forests; the latter manages conservation units established by the Federal Government.

The Amazon Region Protected Areas Program (ARPA) has also contributed to the positive results seen in the country. ARPA is implemented by the Brazilian government, funded by the World Wildlife Fund (GEF) and managed by the World Bank, with partners like the German government, WWF and several international donors.

The program has greatly expanded the country's protected forest areas. It currently funds 114 federal and state areas (including areas of restricted and sustainable use) in a total of 58.3 million hectares; the local communities always participate in the management and conservation of these areas.

“Well-structured programs in support of traditional communities can have positive effects on the poverty levels of these communities and may also prevent deforestation", states the SCD.

In addition to involving the Amazon population, ARPA has created innovative mechanisms for managing protected areas, such as the "escrow account" system. This system can be used to transfer small amounts of money to property managers - facilitating, among other things, the purchase of fuel and the work involved in inspection.

The success of policies aimed at the Amazon has given rise to new conservation and restoration initiatives in other Brazilian biomes, which must contend with challenges like:

head of the World Bank's sustainable development program in Brazil

In order to protect all of the country's biomes, the new SCD highlights the need to enforce the legislation and public policies currently in place (such as the Forest Code and CAR, the Rural Environmental Registry), carry out inspections and use monitoring technologies.

To that end, in November of 2015 the Brazilian government approved the Environmental Monitoring Program of the Brazilian Biomes, which will map and monitor deforestation and assess vegetation cover, land use and its dynamics, fires, selective wood extraction and vegetation recovery. The program will also monitor the performance of public policies related to the Paris Agreement on climate change and the biodiversity targets in the Convention on Biological Diversity.

This new World Bank paper issues another important warning: the recent devaluation of the Brazilian currency (the real), coupled with falling commodity prices (with impacts throughout the Latin American economy) might further increase deforestation and the uncontrolled expansion of agricultural and grazing land.

According to the study, the economic slowdown in Brazil might "entail the risk of reduced incentives for the enforcement, monitoring, and proper implementation of these conservation policies under the guise of creating jobs”.

The document states: “Illegal logging and laundering illegal timber — while just as unlawful as trafficking drugs — are not nearly as stigmatized. Producers who adhere to the laws have difficulties to compete with criminals who avoid taxes and concession fees and ignore environmental regulations.”.

The Brazilian SCD also highlights the role of climate-smart agriculture, which seeks to reduce greenhouse gas emissions while making crops more resistant to climate change and increasing productivity in a sustainable fashion.

In this sense, Brazil has made progress in recent decades by investing in research and technology - but, as the study states, it can still do more: “Despite the increase in agricultural productivity, the variation of productivity across farms remains huge, as a result of which more land needs to be brought under cultivation to compensate for poor yields.”

According to the paper, through greater control over deforestation in the Amazon and the enforcement of the Forest Code, Brazil can become an example for the rest of the world if it can also overcome the challenge of reconciling efficiency gains in production, increased competitiveness and the protection of natural resources. In doing so, Brazil will be incorporating the protection of natural resources into the country's strategy for production and economic growth.

The importance of increasing production without devastating more land applies to both large-scale agriculture and family farming, which spans 25% of the agricultural land in the country and accounts for over 80% of farms and 75% of the workforce in the field.

If small farmers are to reach this objective, they must be offered greater access to technology (among other things). This could usher in new advances as relevant as the progress seen in Brazil over the last 10 years.