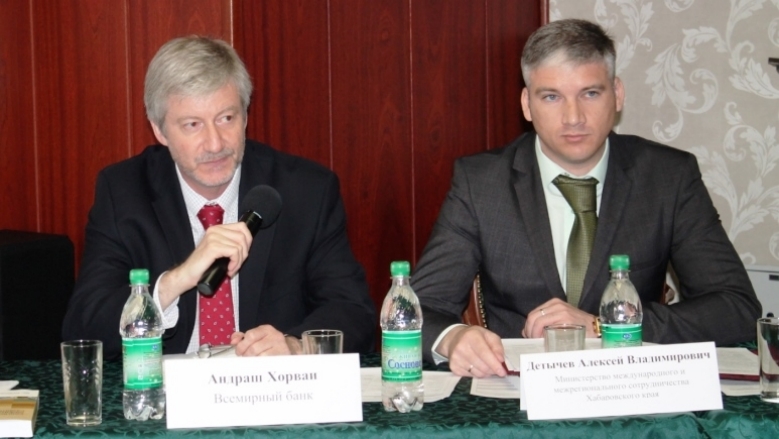 In May 2016, the city of Khabarovsk in eastern Russia was host to a “Knowledge Sharing and Training Workshop on International Development Cooperation”. The event, organized by the World Bank, brought together instructors from higher education institutions in the Far Eastern Federal District.

At the opening of the event, Aleksei Vladimirovich Detychev, Deputy Minister of International and Interregional Cooperation of Khabarovsk Territory, noted the importance of robust development for various new forms of regional integration. “Expansion of the role of the Far Eastern Region is vital for Russia’s effective cooperation with countries in the Asia-Pacific region,” Detychev said.

“Cross-border cooperation will also make it possible to develop the territory of the Far Eastern Federal District itself. The inclusion of new disciplines in the academic programs of higher education institutions will boost professional capacity. Qualified personnel in the area of international development assistance are needed for the implementation of country programs.”

Andras Horvai, World Bank Country Director for Russia, confirmed the importance of regional programs for international development assistance, emphasizing that priorities cannot be fully addressed without the active participation of partners and an increase in the level of professionalism in the field.

Hans-Martin Boehmer, a professor at Duke University and Columbia University, discussed the prevailing views regarding the history and theory behind the formation of the international development assistance system.

Continuing the conversation, Dorota Nowak, coordinator of the World Bank in Russia program, pointed out that discussion of the concept at all levels is a key to success in achieving the Sustainable Development Goals set by the United Nations, which are supported by the global community.

During the workshop, representatives of the academic community discussed Russian principles, priorities, and bilateral and multilateral approaches to providing assistance to recipient countries.

The session devoted to regional and research centers was of particular interest to the audience. New centers – focused on the development of various parts of the Far Eastern Federal District and the creation of partnerships – offer an opportunity to study Russia’s integration in the Asia-Pacific region and the organization of a Far Eastern network comprised of professionals working on the ground, and the academic community.

Representatives of higher education institutions outlined a range of objectives and opportunities for the inclusion of international development assistance issues in existing curricula and for adding new disciplines to strengthen global economics or international relations programs.

The final session of the workshop included a group exercise designed to explore opportunities for creating new courses and programs, ways to include international development assistance issues in existing curricula, as well as opportunities for the creation of partnerships in the teaching and study of this topic, including its regional aspects.