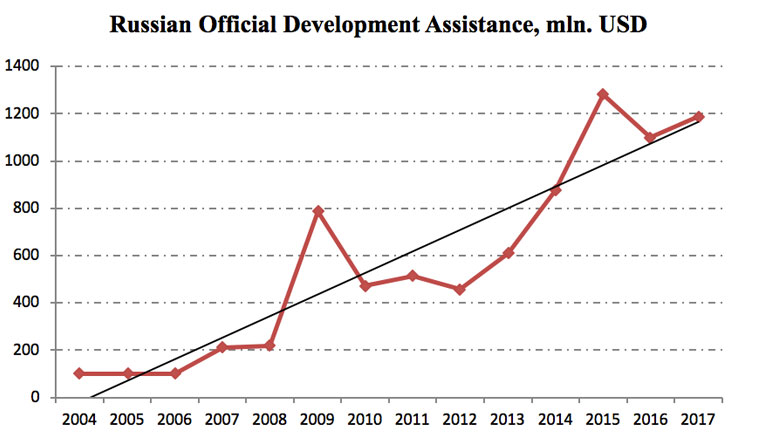 In June 2007, the President of the Russian Federation adopted the national aid strategy “Concept for Russia’s Participation in International Development Assistance”. This strategic document established key objectives for the country’s assistance program based on the OECD-DAC principles of ownership and alignment, predictability and transparency, accountability and monitoring, and the achievement of the Millennium Development Goals (MDGs).

The following priority areas have been defined for Russia’s international development assistance at both the regional and global level:

Russia’s Official Development Assistance steadily increased from about $100 million in 2004 to $1188 million in 2017. The latter amount combines both bilateral and multilateral ODA, including contributions through the World Bank Group.

During the 2008-09 global financial crisis, Russia’s development aid contributions amounted to $785 million. Also during this period, Russia initiated the establishment of an innovative crisis response cooperation mechanism: the Eurasian Fund for Stabilization and Development, with Russia’s pledge totaling $7.5 billion. Part of Russia’s ODA is provided through multilateral channels, including the World Bank Group, the United Nations system, major global initiatives, and special-purpose funds.

Russia has strengthened its global role through extended commitment to multilateral development mechanisms. Since 2004, Russia has steadily increased its assistance to the International Development Association (IDA) and has supported a number of global development initiatives by contributing to various multilateral agencies, including trust funds administered by the International Bank for Reconstruction and Development (IBRD).

Russia has been a partner to IDA since the ninth replenishment (referred to as “IDA9”) in 1997. IDA17 was the focus for Russia’s engagement with the World Bank in 2013, when Russia expressed strong support for IDA as an important multilateral mechanism for providing assistance to the poorest countries. The Russian Federation supported IDA at the Ministerial level using its position as the G20 Presidency, and hosted the IDA17 replenishment meeting in Moscow in December 2013.

A Trust Fund (TF) is a financing arrangement established with contributions from one or more external donors or partners and, in some cases, from the World Bank Group, to support development-related activities including capacity building.

Russia has 22 IDA/IBRD Trust funds, 14 of which are currently active. Pledges to these programs have reached a total of almost $267 million. Russia’s IRBD-administered trust funds are focused on the themes of infectious disease control, quality of basic education, energy access, food crisis response, and social support programs. 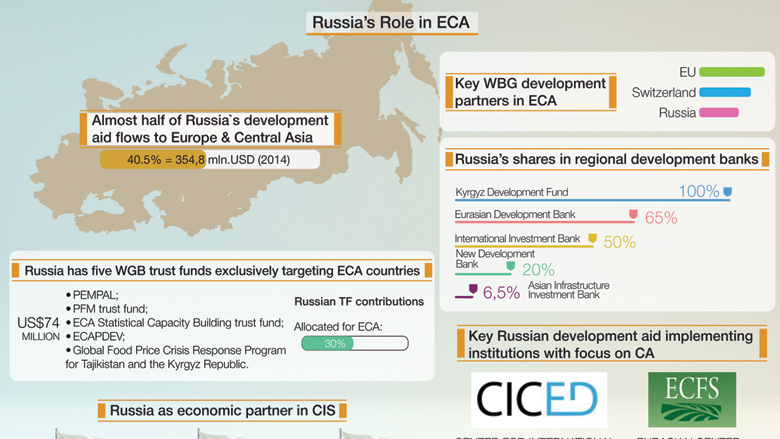 Also Russia, alongside with other donors for international development assistance, contributed to a number of important global initiatives, including debt relief for the most heavily indebted countries and fight against AIDS, tuberculosis and malaria.

The ECA Capacity Development Multi-Donor Trust Fund of $23 million finances projects and programs in low-income countries of the ECA region with a view to improving the quality and speed of their preparation. The trust fund uses multiple approaches to strengthen policy and project development capacity.

The ECA Statistical Capacity Development Multi-Donor Trust Fund of $15 million addresses capacity and financial constraints challenges faced by the statistical systems of countries in Eastern Europe and the CIS region – with emphasis on IDA borrowing countries.

Enhanced engagement with Russia as a provider of global public goods will be central to the World Bank Group’s future cooperation with the country. The involvement of the Group in Russia’s presidencies of APEC in 2012 and G20 in 2013 allowed the organization to play an active role in the formulation and implementation of the global development agenda.

The current cooperation between the World Bank Group and Russia enables the organization to provide support and advice to its client not only on domestic economic development efforts, but also on international and global development issues such as social protection, food security, and global health – thereby contributing to the enhancement of Russia’s participation in the provision of global public goods. 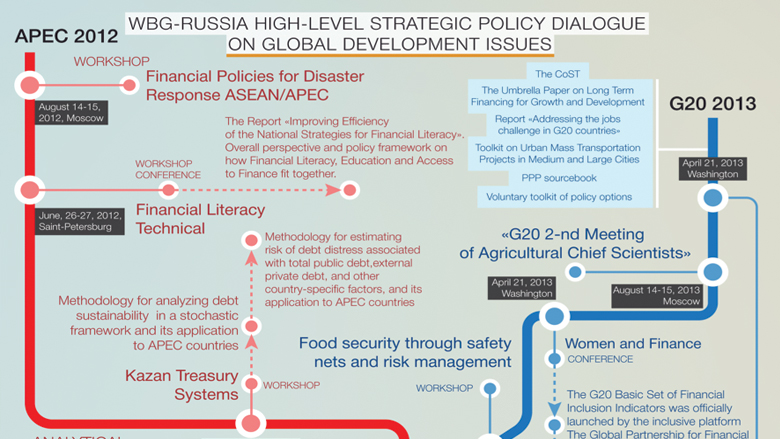 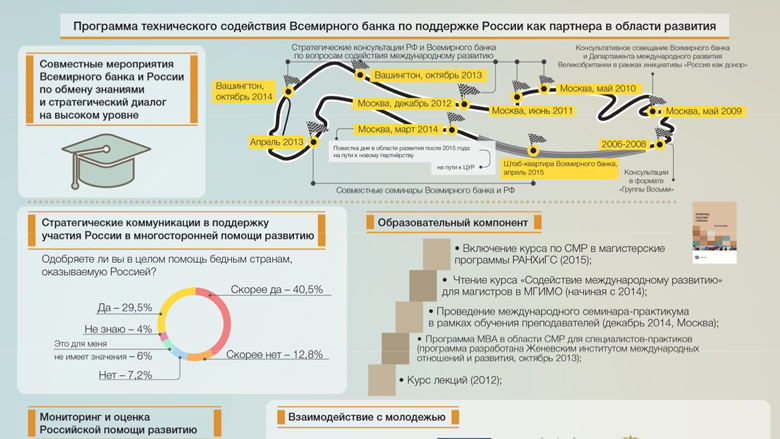 RUSSIA AS A DONOR

Learn more how Russia is shaping it's unique profile in addressing the key challenges of the poorest countries.