GRAND-LAHOU, June 2, 2016 – Coastal erosion has devoured the old town and the lighthouse of Grand-Lahou, Cote d’Ivoire, and has led to the abandonment of homes and the loss of mangroves to firewood. Following widespread destruction of an area that was home to several important cultural heritage sites, Grand-Lahou was relocated 18 km inland in 1973, and the population has migrated westward to Bandama.

Since then, the shoreline has retreated 1-2 meters per year, putting people and economic interests at high risk. According to some experts, extreme climate events could cause erosion of up 20 meters per year in the next few years, and drastic measures may be needed.

This concern was at the heart of Cote d’Ivoire’s national coastal areas and climate change workshop held recently in Grand-Lahou. Organized by the Ministry of Environment and Sustainable Development (MINEDD) and the West Africa Coastal Areas Management Program (WACA), more than 70 representatives from Cote d’Ivoire, West African countries, and development organizations gathered to address comprehensive strategies for reducing the region’s vulnerability to climate change, and the importance of a coordinated, regional approach to the management of coastal areas in West Africa. Participants were able to witness first-hand the devastation of coastal erosion on local communities.

“Our ambition is to become a model of local development, which we are ready to share with other communities,” said the Honorable Jean Djaya, mayor of Grand-Lahou and Member of Parliament. “However, the threats from climate change and the disappearance of the old town of Grand-Lahou (Lahou-Kpanda), our population in coastal areas, estimated at more than 40,000 inhabitants distributed in 10 villages along the 30 kilometer coast, risk losing their livelihoods despite abundant fishery and agriculture, and this hampers the achievement of the sustainable development goals.”

Climate change significantly affects West Africa’s coastal assets; the rising sea level, elevated sea-surface temperature, flooding and coastal erosion, are some of the changes happening now. Home to 31% of the region’s population, which is growing at a rate of 4% per year, this area is especially important as it accounts for 56% of the region’s gross domestic product (GDP).

Similar scenarios are at play in many hot spots on the West African coast. More frequent coastal erosion is challenging traditional livelihoods and the ability for people to capitalize on development opportunities. The result is a growing socioeconomic vulnerability in West Africa impacting coastal communities, and the millions of people who depend on the region’s natural resources for their survival.

"Coastal erosion threatens Côte d’Ivoire, a country with a large population and a considerable economy,” said Benoit Bosquet, World Bank practice manager for Environment and National Resources. “Fighting against erosion is a major challenge that requires a careful and participatory diagnostic. We need to look into options for investment in conventional and green infrastructure, or in the extreme, a possible relocation plan. However, other measures are needed in the short term, including the end of beach sand mining. When the patient is bleeding, we should first stop the bleeding."

Under these circumstances, the unique ecosystem processes and development pressures within the West African coastal zone require that governments – and the stakeholders who assist with development – give special urgency to the task of helping to build resilience against the impacts of climate change. Hence, the WACA program, launched by the World Bank at COP21 in 2015, seeks to better integrate infrastructure and natural resources management in order to enhance the coastal resilience to climate change.

Workshop participants concluded that actions taken at the national level by countries are insufficient to tackle the challenges, and that a regional approach is essential because coastal protection in one country causing further erosion in the neighboring country. National and local leaders across all sectors must begin assessing vulnerabilities, and designing adaptation strategies, workshop participants noted. Successful adaptation to climate risks depends upon good analysis and spatial planning alongside flexible decision-making processes to determine the best adaptation choices, technologies and interventions.

“We are confronted with a new paradigm for sustainable development,” said Dahlia Lotayef, World Bank lead environmental specialist. “Unless we fully integrate climate change considerations at local and regional levels, we will simply be unable to secure the very foundation of people's livelihoods, which is securing a safe place for people to live, work, and produce food for survival.” 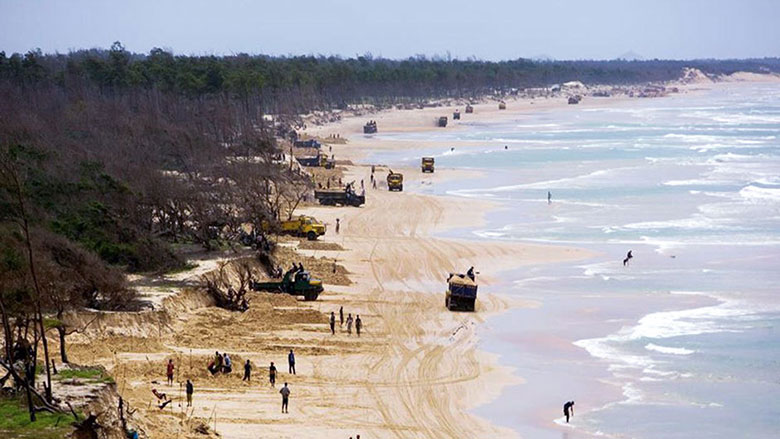